Take Your Imagination Out of This World with Tracks – The Train Set Game: Sci-Fi Pack DLC | Blogdot.tv

Welcome to the latest add on for Tracks – The Train Set Game, available now on Xbox One, where your only limit is the stars. We have introduced a new level on the moon, featuring low gravity, over 30 new decorations and a rocket train!

For those of you yet to try out the Tracks base game, which is available with Xbox Game Pass, here’s a little reminder of what it’s all about:

Tracks gives you the opportunity to jump into an expansive toy sandbox and let your imagination run wild. You lay down wooden track pieces, and create a world using the toybox – a huge selection of adorable buildings and props. When you’re ready to ride the rails, you hop into the driver’s seat and ride your little toy train in first person, controlling speed and direction. Seeing your dainty toy world to scale is something to behold.

With so many new items in the Sci-Fi Pack, available to use in your worlds, I wanted to give you a head start by igniting your imagination. Yes, the game is about trains, but it’s also just as much about getting creative with your toy worlds – so here’s some of the most fun things I’ve come up with so far while playing!

This is just the tip of the iceberg in terms of what you can create with Tracks – The Train Set Game: Sci-Fi Pack, out now on Xbox One and available to purchase on the Microsoft Store. 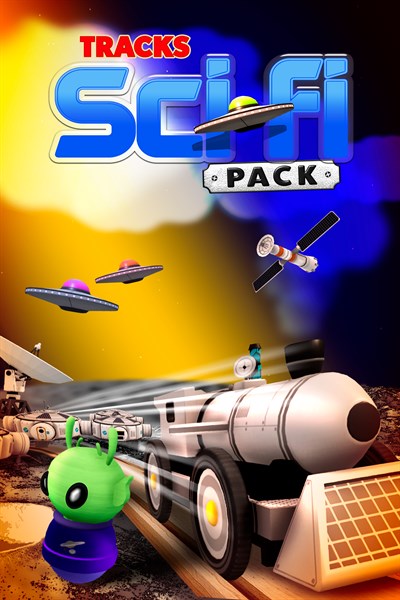 ☆☆☆☆☆ 1
★★★★★
$3.99
Get it now
Return to the rails with Tracks – The Train Set Game: Sci-Fi Pack! Expand your toybox with over 30 items to use in your worlds. Look to the stars and take your train set further than ever before with new buildings, passengers, vehicles and a rocket train. Why not create an uncharted world with the new space rover, UFO, asteroid and alien? Perhaps take a giant leap for mankind with the new moon base, flag, craters and moon lander? Tracks' already expansive toy sandbox has just got bigger. This is a great opportunity to revisit the brilliantly relaxing toy train set builder and hop back into the driver's seat.