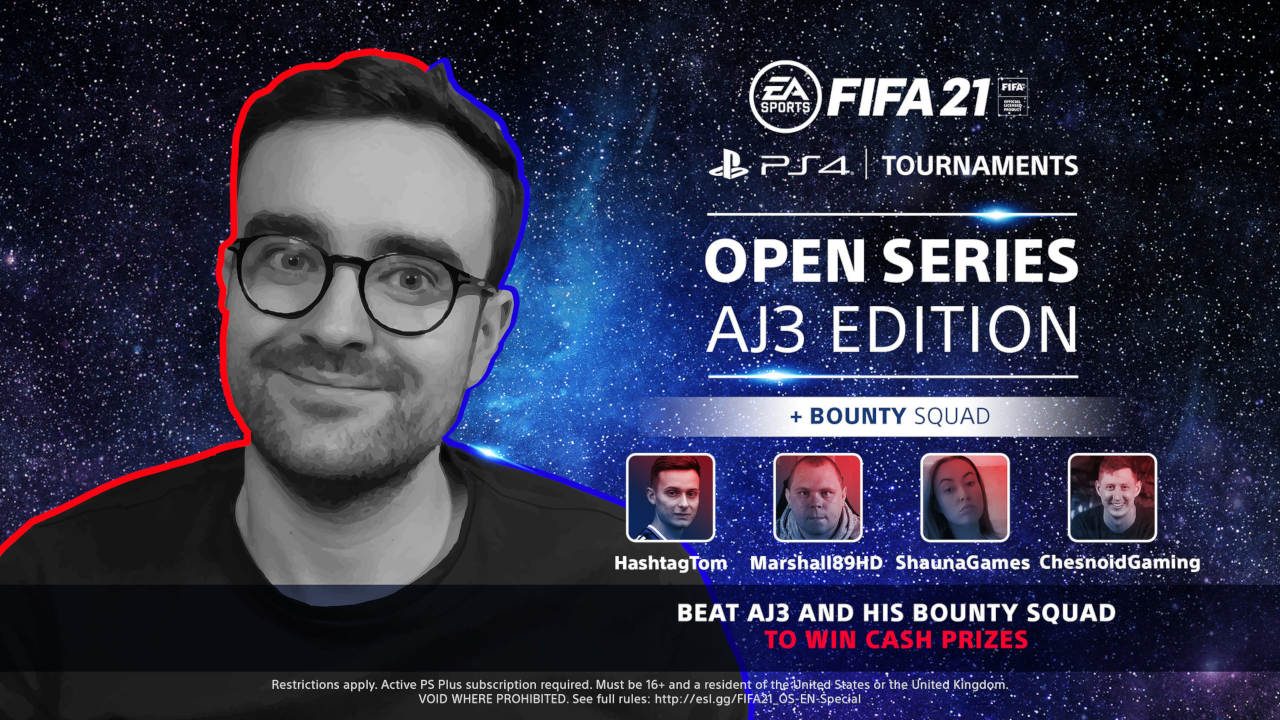 The Open Series has always been the place to win amazing cash prizes, but in November the stakes are seriously raised.

Top FIFA Creators are competing this month, and you could be taking them on in an exclusive Special Edition Match.

Whatever your gaming ability, this is your chance to take on the best and win big.

AA9Skillz (US) and AJ3 (UK) are on board. If you recognise those names, you’ll know it doesn’t get much bigger than this.

Because they each captain their own elite Bounty Squad of fellow creator talent who are ready to play you, one-on-one, for cash.

With reputations like theirs on the line – and thousands of fans watching worldwide – the pressure is on.

It won’t be easy, but win here and you’ll immediately make a name for yourself as a genuine FIFA wunderkind.

FIFA 21 Open Series participants this November will be eligible for an invite to their own Special Edition Match against a Creator. Then it’s down to your gaming skills to win the cash.

Anyone can enter, whatever your skill level. There’s nothing to lose and potentially everything to win. The Open Series: Special Editions is open to all eligible participants* in the US and UK.

Play the biggest creators in the game

On the US FIFA 21 Bounty Squad

On the UK FIFA 21 Bounty Squad

These creators will be the first to tell you they’re among the best.

But are they all talk? If you’ve ever watched them play and thought ‘I could beat them’, now’s your chance.

You’ll win $125 for beating any Bounty Squad member while the Bounty Squad captains have a huge $500 bounty on their head.

It’s not just cash up for grabs

As with all Open Series tournaments, there are prizes for placement and participation.

From yet more cash to exclusive themes and avatars to collect along the way.

The Open Series really is the place to play if you want to win big.

Only those who participate in a weekly Open Series qualifier this November will have a chance to play in the Special Edition Matches.

Once you’re in the draw, you could be invited to play a member of the Bounty Squad the following week.

The Open Series itself is a Swiss Format. Excel through four rounds of competitions against players of similar skill to reach the Monthly Finals. Only the top eight qualify. Win that Monthly Final, and your journey from amateur to all-star will be complete.

The Open Series is open to anyone* and is the quickest way to open up a whole new world of cash prizes and exclusive FIFA 21 rewards.

What are you waiting for? Your All-Star status is just a few wins away. Visit compete.playstation.com to learn more and sign up to play.

What are you waiting for? Your All-Star status is just a few wins away. Visit compete.playstation.com to learn more and sign up to play.

*Restrictions apply. Active PS Plus subscription required. Must be 16+ and a resident of the United States or the United Kingdom. Void where prohibited. See full rules: http://esl.gg/FIFA21_OS-EN-Special