Crashing into stores soon, Supermarket Shriek is the second Xbox One title from us at Billy Goat Entertainment, an obscure Irish video game developer based in sunny Belfast, best known for the biggest nautical disaster of the Twentieth Century and being a key recording location for HBO’s seminal “Game of Thrones” television series. But all those things are thankfully long behind us… unless there is a petition to reshoot the ending of “Titanic” where Rose just moves over a smidge and lets Jack on the damn door as well!

Which is why we are concentrating on the future, the very near future, when you (yes, you!) valued reader can expect to download Supermarket Shriek when it releases on Xbox One with Xbox Game Pass this Summer.

How great is that? If you’re an Xbox Game Pass member, you can pick up Supermarket Shriek as part of your membership. Let me explain a little bit more about what our game’s all about. 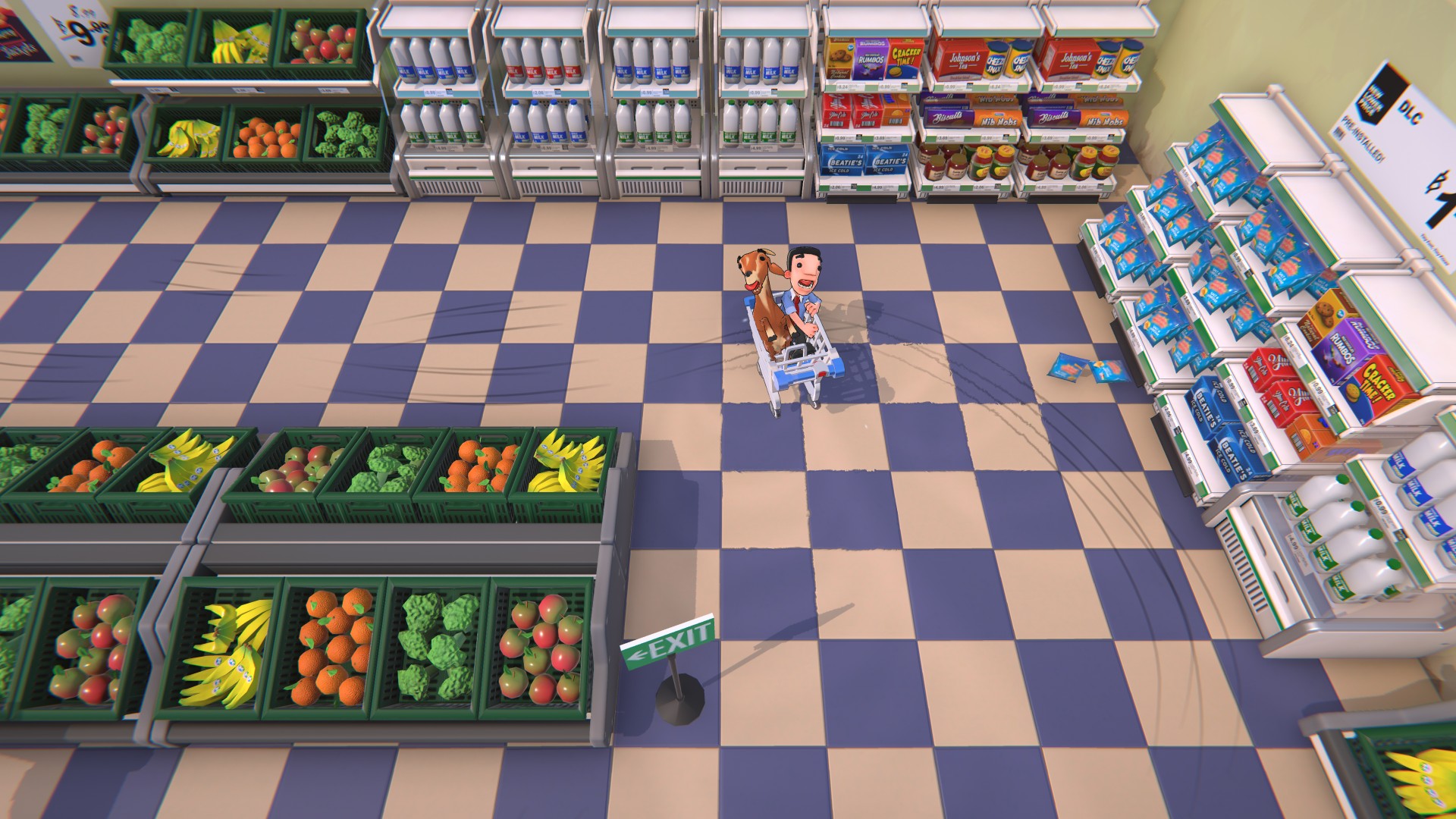 Supermarket Shriek is a unique (shopping) kart racer. In our story mode, players find our two protagonists, a rather nervous looking gentleman we’ll refer to as Billy, and a goat who we will refer to as Goat, situated together inside a humble shopping cart. I would explain why but I fear that would simply spoil the profound, intellectual story we are attempting to tell. Furthermore, our protagonists propel their shopping cart with their wild, incomprehensible screams.

You can aid them on their adventure alone or with a friend in co-op, assuming the role of one of our hapless heroes! Navigate through a series of deadly obstacle courses situated inside a range of shops, boutiques, and grocery stores. Both Billy and Goat will have to cooperate, coordinating their screaming to direct their shopping kart safely to the checkout without being horrifically murdered by giant axes, buzz-saws or eight-foot-tall foosball players to name a few of the obstacles.

Best of all, while you can use gamepads to control Billy and Goat, connect a headset to your controller in co-op and then use your own screams to propel our heroes. Hopefully that goes some way to explain just what the heck is going on! 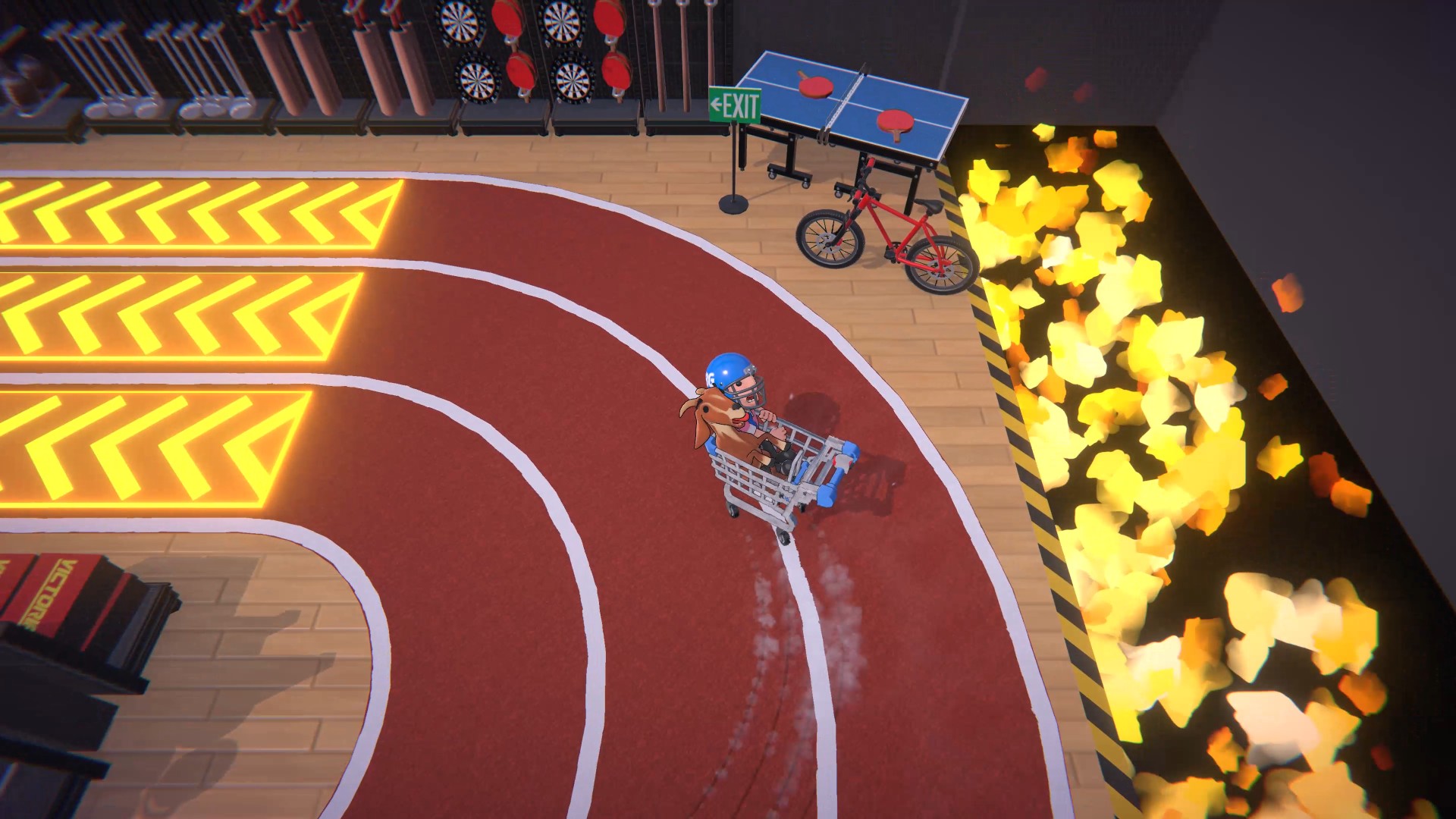 Supermarket Shriek is the result of just over two years development by our five-person studio having started life as a Global Game Jam entry by Paul, our lead programmer, and myself. For those unfamiliar with the event, the Global Game Jam takes place at the end of January every year where game developers, professionals, students or just keen hobbyists meet up and are tasked with creating a game from scratch inside 48 hours. A typically vague theme is chosen to connect all the entries and a series of bonus diversifiers are listed to implement in each entry. These diversifiers usually add a bit more of a challenge when designing your game, things like “create a game that can be played with only one button” or “create a game that only uses two colours” are typical examples.

The theme when Paul and myself came up with Supermarket Shriek was “waves,” so we thought of using “sound waves” to control our game. We wanted to make a co-op game because, at game jams like this, co-op games are always the most fun when played by everyone together at the end. Paul had recently become somewhat fascinated with videos online of goats screaming and sounding indistinguishable from humans, so he insisted that one of the characters was a guy and the other was a goat.

We wanted to have multiple players use their voice to control the same thing, so we needed a vehicle or object for them to be positioned in that could be easily forced around in any direction. We wanted the players to have to traverse a level, like an obstacle course, maybe collecting things along the way and agreed that a shopping cart ticked all our requirements. Finally, we needed a theme. Being a big fan of the late, great, television gameshow host Dale Winton, we took inspiration from arguably his most popular show, “Supermarket Sweep.” 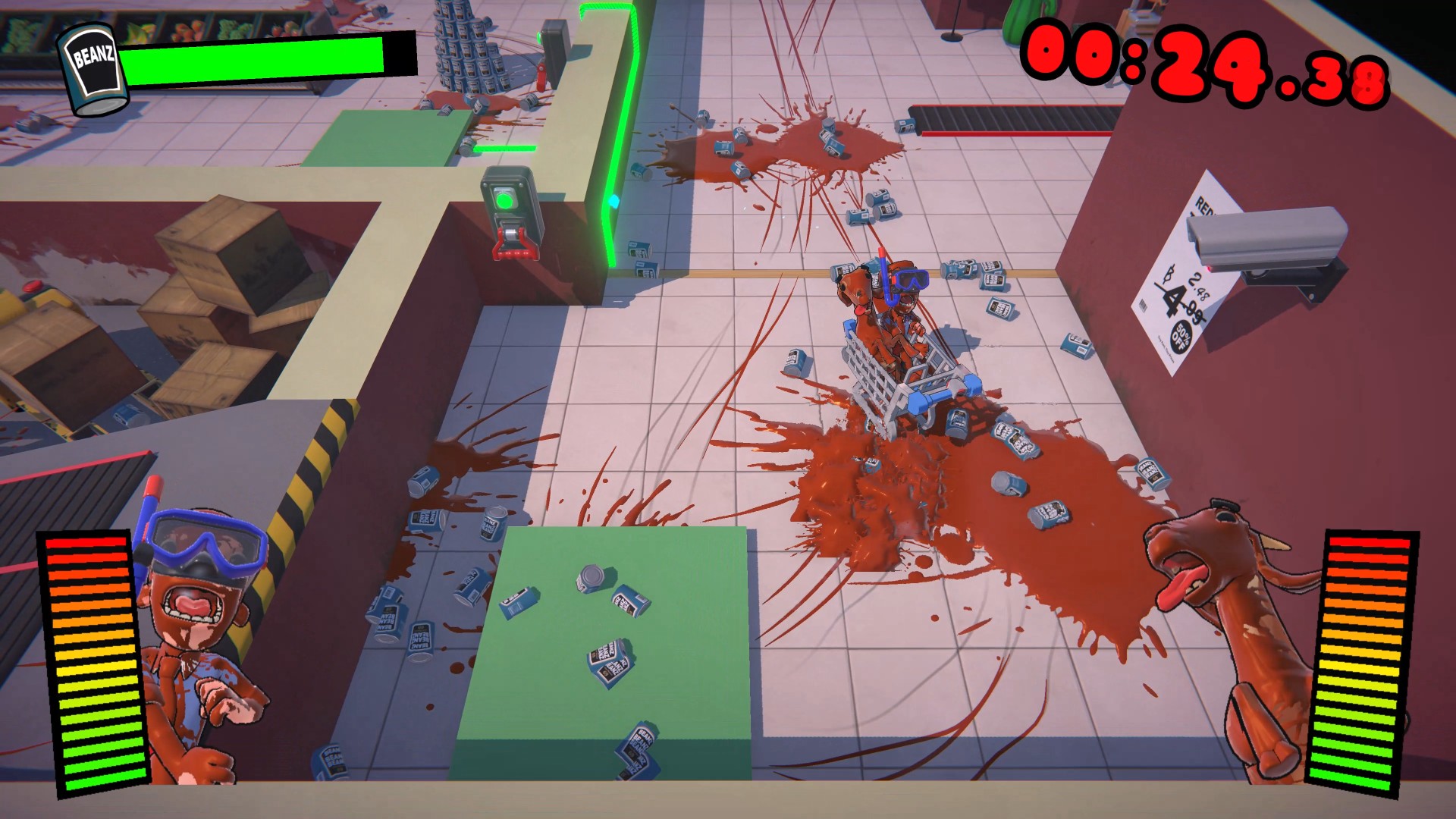 We decided to theme our game around a parody gameshow of sorts, something zany and camp that wouldn’t look out of place on mid-afternoon TV in the 90s (albeit with more deadly challenges) and thus Supermarket Shriek was born!

Wind the clock forward a few years and you find us franticly cobbling together the final version of our game that you, valued and patient reader, will be able to play for yourself very, very soon.

We very much hope that you’ll enjoy our game and enthusiastically extol its virtues to friends, family, colleagues, random strangers you accost in the street.

Finally, to borrow a phrase from the late Dale Winton himself, the next time you’re at the checkout and you hear a beep, think of all the arguments you could be having because your co-op partner decided to scream too early, and thus send you flailing to your fiery deaths in a pit of lava, when all you had to do was collect a bottle of chocolate milk and get out of the damn store… in Supermarket Shriek.