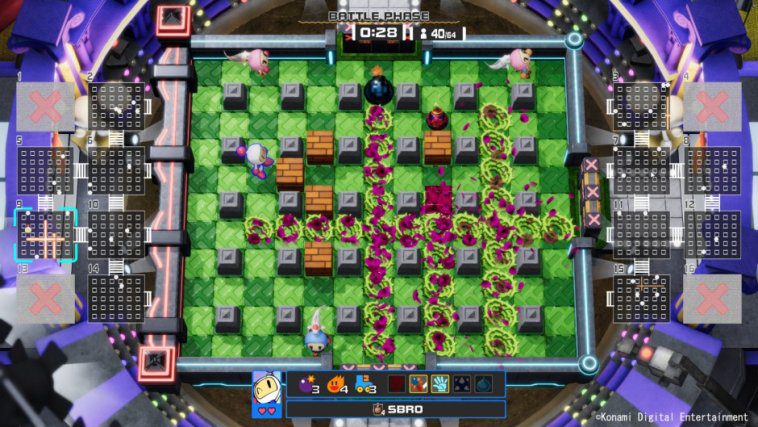 Super Bomberman R Online takes Bomberman’s rich history and blows it up (pun intended) to a massive 64-player match. Bombs explode, blocks burst, power-ups are everywhere, and players scramble from room to room on an ever-shrinking map to prove they can be the best Bomberman!

For gamers new and old, keep this very important fact in mind: Bombs will blow you up, including your own! And you cannot walk through a placed bomb. At some point in any Bomberman game, you will find yourself trapped between a hard place and a deadly explosive device. If this is the first couple seconds of the match, you are likely going to be one life down. But, if you have found a few power-ups, you might have some options to save yourself.

The boxing glove lets you punch a bomb out of your way, over blocks, past players, and even wrap it around the map edges! The kick upgrade lets you shove that bomb in a straight line away from you.  Look for other power-ups that make your explosions bigger, drop down more bombs, move faster and more.

Let’s say you do find yourself exploded, don’t worry! One of the new features in Super Bomberman R Online is the heart/life system. You start with three and you can find power-up hearts to gain extra lives to keep battling against your competitors. You can even find a friendly Louie, a classic Bomberman friend who becomes your mount and take an extra hit from a bomb blast just for you.

Super Bomberman R Online is free to play for all players on Xbox One and Xbox Series X|S – Xbox Live Gold not required! We love this new feature as it allows friends and family from all over the globe to get together and have fun.

If you pick up the Premium Pack DLC, you can make your own private rooms to experiment, practice or host your own tournament and in the DLC you get a whole slew of new and fun characters to play like Alucard, Snake, or Pyramid Head! Within the silver and gold season passes, there are a ton of different ways to make yourself stand out on the battlefield. Explore the customization options to replace your pompom with a coffin or dress like a rock star!

So, go check out the game and have fun! See if you have what it takes to be Bomber One! Play Super Bomberman R Online for free today! 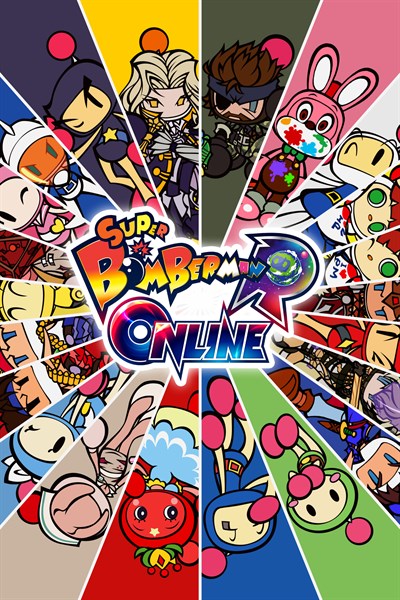 ☆☆☆☆☆ 20
★★★★★
Get it now
Drop bombs and collect power-ups to blast your way through SUPER BOMBERMAN R ONLINE! You can compete against up to 64 players from around the world in this explosive survival battle! Fight your way to the end and outlast all other players to be BOMBER ONE! FREE TO PLAY ONLINE BATTLE ROYALE Back to classic Bomberman fun, the original survival battle format gets supercharged to 64 players online! CUSTOMIZABLE CHAOS Self-explode in style with fresh outfits and bomb skins bursting with pop-corn, or try on the latest head accessories available to customize your look! PICK YOUR POWER-UPS From essential Punching Gloves to the return of the iconic Louies, pick your power-ups fast to your kick your friends out with a spark! 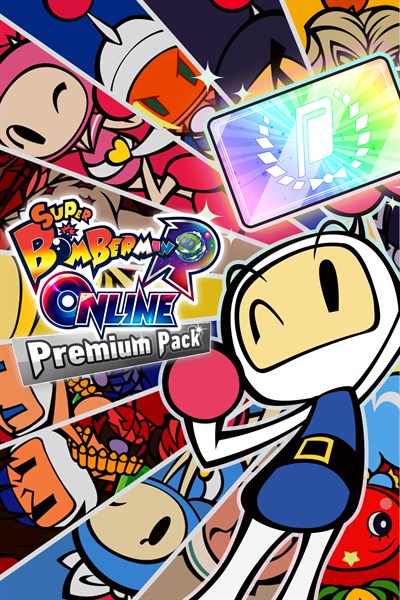