The park is officially open! Super Animal Royale (Game Preview) invites you to pick an animal, grab an umbrella, hop off the back of a giant eagle, and sail down into the abandoned Super Animal World safari park for a fast-paced, frenetic dose of 64-player combat.

The Xbox One version features cross play matchmaking and cross-save with all other versions, so whether you’re new to the island or a Super Animal Royale veteran, you can bring your animals with you wherever you play.

If you’re an Xbox Game Pass member, you’ll start your journey with the Founder’s Edition DLC for free. The pack is only available to early supporters during the game’s Xbox Game Preview and Steam Early Access and includes three exclusive Super Animal Royale breeds and 10 exclusive cosmetic items.

Today also marks the arrival of the Beach Party Animal Pass, for those looking to equip their squad of Super Ducks with life jackets. Coinciding with a massive expansion of the island’s shoreline, season 0.5’s accessories will help you explore the new beaches in style.

Super Animal Royale’s top-down 2D shooting, line of sight fog of war system, and colorful world set it apart from other games in the battle royale genre. Streamlined controls make it easy to learn and six-minuteish matches make it less punishing. Still, the mechanics have surprising depth, and reaching the top of the food chain is no easy task.

To survive, you’ll need to explore the park’s deserted attractions, frozen tundras, and blistering deserts to find weapons like submachine guns, bow & sparrows, and banana peels. To cover ground more quickly, you can also hop in a hamster ball or ride tandem with your duos partner on the back of a giant emu.

A Fork in the Mode

Beyond the core battle royale mode, the team is also experimenting with new limited-time game modes that support squads of up to four players. In S.A.W. vs Rebellion (32v32) you’re assigned to fight for either Super Animal World (S.A.W.) or Super Animal Super Resistance (S.A.S.R.) forces and win by either eliminating the entire opposing team or capturing and defending more flags than your enemy. Captured flags also provide loot and a healing buff, so you’ll want to be strategic in fighting to hold them.

All the Super World’s a Stage

So, what happened to Super Animal World? How did a family-friendly animal theme park become the stage for the world’s most adorable fight to the death? Clues to the park’s history are strewn across the map, with secrets to find, NPCs to talk to, and easter eggs to unlock in between gunfights.

To learn even more about Super Animal World’s twisted lore, check out the game’s companion animated series “Super Animal Royale Tonight,” which follows the adventures of intrepid reporters Donk Patrick and Howl Michaels as they brave ceaseless attacks by the S.A.S.R. to bring you the best community submitted gameplay highlights. New episodes will arrive alongside every new in-game season, so make sure to capture your best moments and submit them for a chance to see your own clip featured on the show.

You can watch Season 2 of “Super Animal Royale Tonight” on YouTube, including the brand new episode showcasing the Shorelines update.

Community feedback over the past 2.5 years of Steam Early Access on PC has played a huge role in what makes Super Animal Royale the game it is today, and the goal is the same for the Xbox Game Preview version. To contribute to the game’s continued evolution, join the game’s Discord server, where you can chat with the developers and engage with the artist and content creator communities. You can also tweet @AnimalRoyale on Twitter or find the game on Facebook and Instagram.

☆☆☆☆☆ 47
★★★★★
Get it now
This game is a work in progress. It may or may not change over time or release as a final product. Purchase only if you are comfortable with the current state of the unfinished game. It’s fight for furvival! Super Animal Royale is a 64-player, frenetic, top-down 2D battle royale where murderous animals fight tooth, claw, and machine gun across an abandoned safari park. Collect and customize your favorite critters and weapons, then put them to work in solo matches or team up as a squad of up to four players! Key Features • Survival of the Fittest: Scavenge a variety of powerful weapons, armor and items to become the apex predator in intense 64-player online matches. • The Superest World: Explore a massive, beautifully illustrated 2D island and discover its hidden lore, by chatting with its inhabitants and scouring its rich environments for clues. • Different Stripes for Different Fights: Collect hundreds of animal breeds and customize them with thousands of cosmetic items, weapons, outfits, and even umbrellas! • Evolving Events & Updates: Enjoy an endless stampede of new content, including seasonal outfits, animals, and weapons to collect. • The Fast and the Furriest: Flatten your foes while rolling dirty in a Hamster Ball, or mount a Giant Emu and peck your way to the promised land. 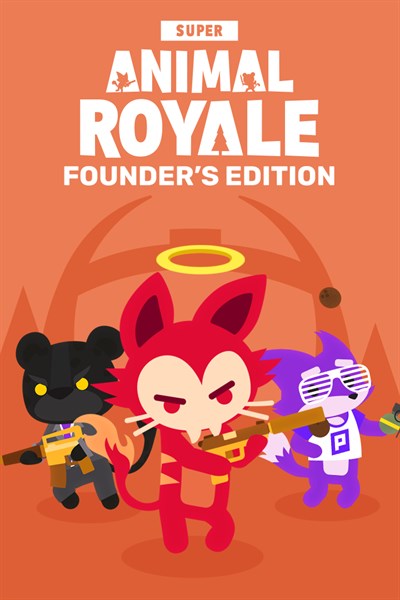 ☆☆☆☆☆ 17
★★★★★
$9.99
Get it now
Ultimate Game Pass
This game is a work in progress. It may or may not change over time or release as a final product. Purchase only if you are comfortable with the current state of the unfinished game. Support Super Animal Royale as a Founder and get 3 animal breeds and 10 cosmetics that are exclusive to Early Access and only available in the Founder's Edition. You'll also get your username colored in the orange founder's color to show that you were one of the original supporters of the game! Included Animal Breeds: Super Hellfire Skullcat Super Pixile Fox Super Black Panther Included Cosmetic Items: Pixile Purple Tee Pixile White Tee Angel Halo Charcoal Suit With Pixile Tie White Shutter Shades Heart Glasses Golden M16 Golden Silenced Pistol Juggling Roulette Emote Fireworks Death Explosion Neither animal breeds nor cosmetic items provide any gameplay advantage.