Steelrising is a soulslike set in Paris, 1789, during an alternate version of the French Revolution. Storytelling is an important expertise of Spiders, and you will be required to solve various intrigues, defeat incredible foes, and explore a twisted version of Paris to return power to the people and bring the revolution to one of multiple possible endings.

The soulslike genre is still inherently very demanding, and all its inspired mechanics might be tough to jump into, which is why we’re offering an Assist Mode.

In Steelrising, several settings that are very common in soulslike games can be adjusted:

This subject was raised at the beginning of development following messages from fans who found the Story Mode of our previous game still too difficult. The team was also able to attend an accessibility training course to be better able to find the most suitable solution for Steelrising. In the end we decided not to have a difficulty mode per se, but to allow players to set individual parameters themselves to tailor their experience with the combat system.

The pacing of the game remains unchanged, and the timing of attacks and the aggressiveness of the enemies also remain as they are in the base game.

The Assist Mode can be activated at the beginning of the game and can also be activated or deactivated at any time from the options menu. So, feel free to use it just for a specific boss or mob you have issue with. Beware, however, if you intend to unlock all the achievements, as some difficulty-related ones will not be available if Assist Mode has been activated at least once during a game.

Of course, it is also possible to reassign the majority of the buttons on the controller.

We hope that those daunted by soulslikes will be tempted by a first foray into this genre to experience the world of Steelrising, in what remains a Spiders RPG through and through. Steelrising is available starting today on the Xbox Store for Xbox Series X|S. Vive la Révolution! 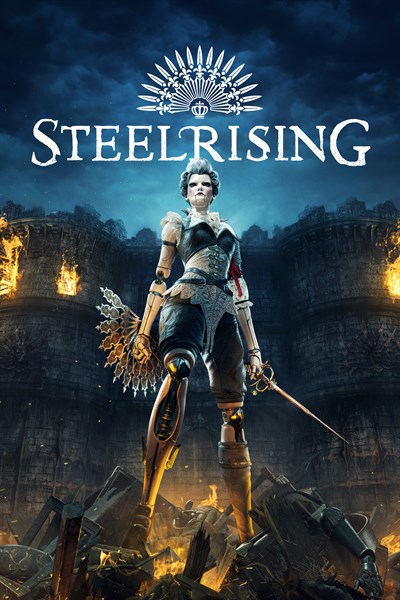 ☆☆☆☆☆ 11
★★★★★
$49.99
Get it now
Xbox Series X|S version of NOT playable on Xbox One. The city burns and bleeds as it suffers the madness of King Louis XVI and his violent legions of automatons. Aegis, a mechanical masterpiece created by the engineer Vaucanson to be the queen's bodyguard, must save the French Revolution in this challenging action-RPG. CHALLENGING COMBAT BETWEEN AUTOMATONS Up against the king's mechanical soldiers, deadly accuracy will be needed. String together dodges, parries, jumps and devastating attacks to fight your way through Paris. Every fight will test your nerve and requires excellent discipline, while the huge relentless machine bosses demand patience and skill. AEGIS: A CHARACTER WITH EXTRAORDINARY SKILLS Define your own style and upgrade your abilities as you progress through the game. You can play as a ruthless warrior, a hard-hitting bodyguard, a deadly dancer or a virtuoso of the elemental arts. Take advantage of a wide variety of weapons and skills to approach each fight in your own unique way. REVOLUTIONARY PARIS IS YOUR PLAYGROUND Using carriages, grapples, secret passages, a detailed map, and other methods and tools you find along the way, explore a city experiencing its darkest days. Your grappling hook adds a new dimension to exploration and Paris's verticality. Combined with your dash ability, it will provide access to all the city's secrets across multiple levels you can explore over and over again. CHANGE THE COURSE OF HISTORY You are one of the main characters of an alternative history where Paris is being choked by a tyrant king. Allies and enemies with unclear motives will cross your path, such as Marie-Antoinette, Lafayette and Robespierre. It's up to you to cut a path through all the plotting and put an end to one man's madness so that the French Revolution succeeds.

Related:
Next Week on Xbox: New Games for September 5 to 9
License to Thrill – Iconic Franchises and Exciting New IP Wow at Nacon Connect
Steelrising Is Now Available For Digital Pre-order And Pre-download On Xbox Series X|S