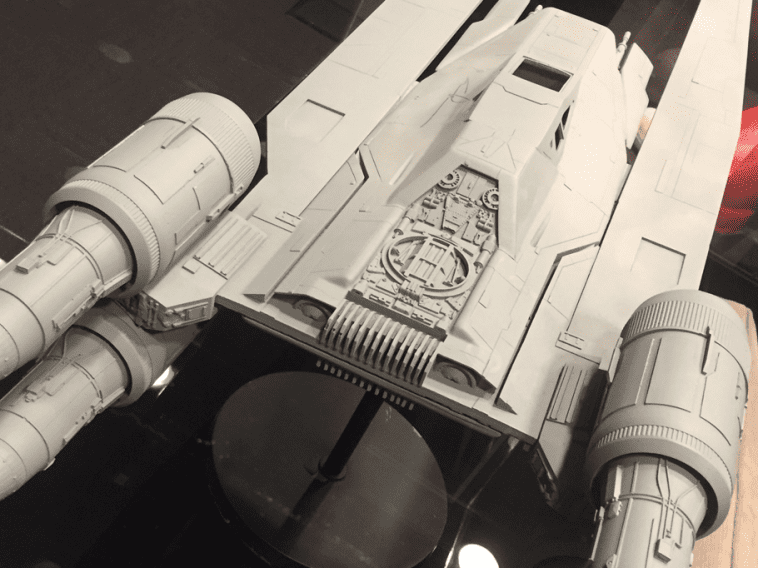 A lot of work goes into creating Star Wars models like the U-Wing and the Resistance Bomber. For that, model maker Alexander Hutchings trusts Zortrax machines.

Alexander Jay Hutchings is a model maker who’s worked on a number of Blockbuster films, such as Rogue One, the Force Awakens, and The Mummy. While most of his work is done by hand, for many intricate components, he relies on 3D printing:

“Lots of grills, complex geometry. We would 3D print those whenever we couldn’t make the part by hand.”

According to Hutchings, the creative process “all begins with the script”. Screenwriters’ descriptions of vehicles are passed to concept artists, who in turn produce sketches for perusal by the director.

The most promising designs are ordered as models. That’s where Hutchings comes in.

Spaceship models for Star Wars are typically generated at a scale of 1:24. Especially large ships are done at 1:48, “otherwise the thing would have to be massive.”

“The reason is simple, Zortrax has tested them. From my perspective, if I would use a third-party material, and it would clog up the printer, the machine would go out of order for half a day. It’s half a day’s worth of work lost. I don’t have time for this.”

Although he started by 3D printing with Z-ABS, Hutchings now works almost exclusively with Z-ULTRAT, due to its low warpage.

Hutchings grew up playing with toy soldiers and rifles made of sticks in Kent, UK.

Make believe turned into a passion with Air Force, Navy, and Army models, as well as Games Workshop Warhammer figurines. Even his friends would give him their miniatures to paint, knowing full well his talent.

Yet the original inspiration for modeling, says Hutchings, comes from Star Wars: “It was probably The Return of the Jedi that truly made me look at models, saying wow, they’re really cool, for the first time.”

Of course, one doesn’t begin a career working at Lucasfilm. After high school, Hutchings studied at the Kent Institute of Art & Design, now the University for the Creative Arts.

“We’re talking down to a millimeter precision. One mistake and you don’t get paid. Above all else, it teaches you discipline.”

The hard work paid off when the model maker was given the opportunity to work in the production of The Edge of Tomorrow. There he connected with and impressed Neil Lamont, who was also involved in the art for Rogue One and Force Awakens.

It was working on these films where he first started using 3D printing. He now regards it as an essential part of his work:

“Some of my colleagues perceived the 3D printer as a machine that would take their jobs away,” says Hutchings. “It’s not a technology about to replace us. It’s a tool to make our work better.”