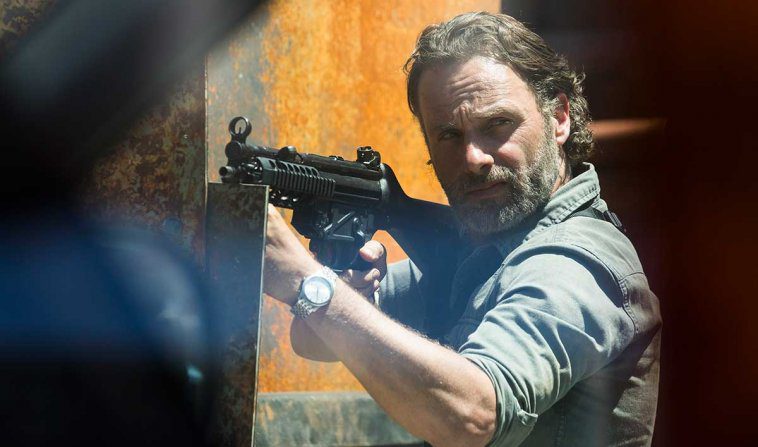 Andrew Lincoln, who plays Rick Grimes on AMC’s The Walking Dead, talks about his character’s mentality at the start of the new season, what the future looks like for Rick and taking out the Big Bad Wolf of the show.

Q: The first scene of the Season 8 Premiere features Rick rallying his people and insisting the world belongs to them. How far has Rick come from this time last year?

A: It’s a complete turnaround from a man who’s bowing before Negan at all costs for the sake of the community to a man who is free and liberated… It’s the total opposite of the man you saw at the beginning of Season 7. Certainly, you see the sentiment of his speech – which is that they’ve already won no matter what happens next.

Q: The attack on the Sanctuary was so intricate and strategic. Does the group getting caught out in the woods serve as a permanent reminder of what Negan is capable of if you’re not armed and ready?

A: That’s a great question. I think they are absolutely aware of the organization and skill of the foes they face. They know they need as decisive and overwhelming of a plan as possible because they are outnumbered and outgunned. They find the biggest army available to them, which is thousands of walkers. It’s an intricate plan based on the fact that they need to hit them big and early in order to get the upper hand. If they open fire and take out everybody, then the war is irrevocably on and it’s always going to be on. Of course, Rick tries to take a shot at Negan because he’s pledged to kill the man, but the rest of it is much more a show of force and then a retreat in order to blow open the gates and let the army in. As it goes on, you realize the plan is even more intricate.

Q: Is it gratifying for you to be back in one place with so many of your fellow cast members?

A: Yeah! That’s been the biggest thrill of this season – the fact that I get to work with people I love and who my character loves being around. They are some of the best friends I’ve made in my life. For a couple of seasons, we’ve been separate and divided in separate story arcs, but this season is very much The Magnificent Seven and everyone coming together to vanquish the Big Bad Wolf.

Q: The Season 8 Premiere is the 100th episode! What did that mean to you, personally?

A: I came to this country to work with actors like Norman Reedus, Melissa McBride, Michael Rooker, Scott Wilson, Lauren Cohan… these are amazing actors and we built this show together. There’s something incredibly satisfying about walking into a scene with somebody you’ve spent the last eight years with. It’s been an extraordinary roller-coaster of a journey together both on the screen and off. That’s been one of the biggest positives for me.

Q: There’s a theme of reshaping the world and building for future generations. Is that what Rick’s dream sequence of future Alexandria represents to him?

A: This future Alexandria is one of peace. You see in the episode, he says [to Maggie], “When this is done, I’m following you.” He realizes he’s not a politician. He’s not a governor. He’s a general at the moment. He wants a future for his children and he’s ultimately a father. He’s fighting as a father for future generations. What this season represents for him is: “What are we ultimately fighting for and what is the cost?” The vision that Deanna put forward in Seasons 5 and 6 is something I think he believes is a reality, but they do have a huge obstacle in the way that needs to be taken care of. That’s the nuts and bolts of this season.

Q: How do you think the giant white beard compared to some of your other looks on The Walking Dead?

A: I mean, that’s actually what I look like before makeup. It was nice because I didn’t need any dye put in my beard. [Laughs] It’s certainly a look. I hope it reprises its role on the show!

Watch full episodes of The Walking Dead on amc.com and AMC apps for mobile, Fire TV, Xbox One, Apple TV, Roku and Chromecast.

To get more exclusive interviews with the cast, sign up for the weekly Dead Alert.