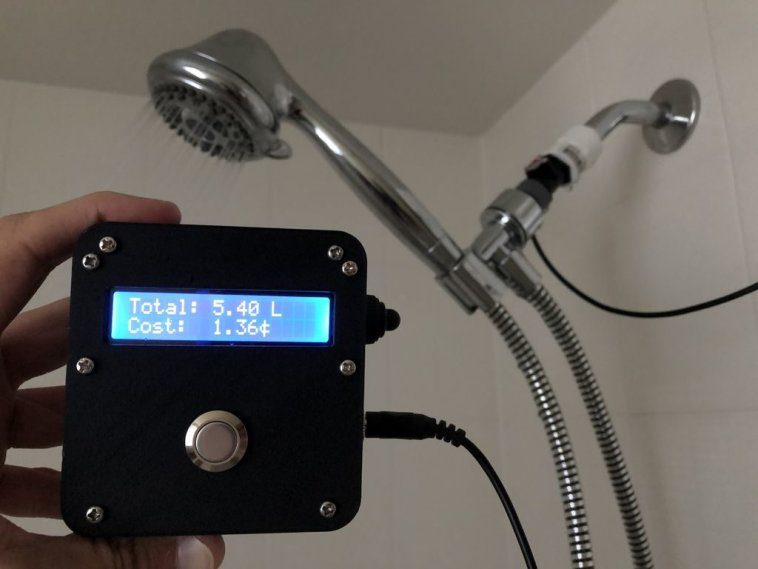 Shower monitor helps you save water and money

You (hopefully) take regular showers or baths, but how much water do you use each time you step into your facilities? If you don’t know the answer, then this monitor by LiamOSM could be just what you need.

The device uses a flow sensor plumbed inline with a shower head, which transmits pulses to an Arduino Nano setup. This Nano, which resides in a nicely 3D-printed enclosure, measures these pulses and outputs the amount of water you’ve used to a 16×2 LCD screen, along with its cost calculated according to your particular utility rates.

Using such a monitor would likely be an eye-opening experience, and the inexpensive flow sensor used here could be a great tool for other projects as well.

Which uses more water – a bath or a shower?

I was recently thinking about this question, and I realized that I don’t actually know how much water is used when I shower. I know when I’m in the shower sometimes my mind wanders, thinking about a cool new projects idea or trying to decide what to have for breakfast, while water is just gushing down the drain. It would be a lot easier to reduce my water consumption if I actually knew how many litres I was using each time!

I did a bit of research, and found that different shower heads can use anywhere from 9.5 litres (2.5 gallons) per minute to less than 6 litres (1.6 gallons) per minute, if you have a flow restrictor installed. A very old shower could use even more water.

I decided to design and build a device that would display the total volume of water used per shower, the cost of the water, and the flow rate. I’ve had this device installed for a few weeks, and it’s really handy to have a live readout of the amount of water being used.