Have you ever imagined if machines took control of the world?

Imagine that you have to look out for your sister in the middle of chaos, deadly machines, and a post-apocalyptic world and all you have is one weapon to defend yourself: your shield. Hard to say about this parallel reality, but you will be able to experience it in Shieldmaiden, developed by Dumativa Game Studio, ready for you on Xbox.

Shieldmaiden is a 2D action platformer game in a vibrant pixel art cyberpunk world. The end of the world has arrived and Asta is in the middle of this apocalyptic reality, but she realizes everyone is gone. You will search for her missing sister through the streets of Modigard. During this adventure there will be many obstacles along the way, but you have your shield as your ally to not only defend yourself but also attack your enemies. You can also pet a robot dog on the way!

During the development of Shieldmaiden, we wanted to bring this feeling of nostalgia that pixel art brings, but also a tribute with the modern cyberpunk style. We created this atmosphere in Shieldmaiden using a retro wave soundtrack and futuristic apocalyptic scenario that is guided by a narrative that follows two sisters trying to find each other during the world’s end.

Along the journey you will discover and explore the different places in Modigard with several challenges and types of enemies. In addition to this emotional story of Asta looking for his sister and the epic fights, we have surprises for players in-game, collectibles are secretly kept in the game. Will you be able to find all of them?

We hope that you will embark on this journey of perseverance and discovery and beat up all the enemies along the way. Take your shield and get on this beautiful adventure today on your Xbox! 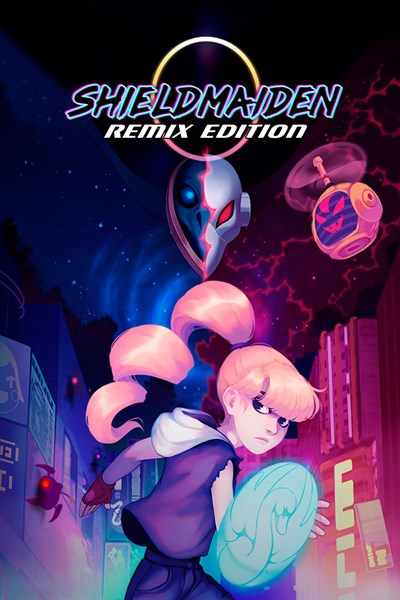 ☆☆☆☆☆ 4
★★★★★
The world as it was known is no more. Modigard, like other cities, was recently devastated by a shocking and mysterious event. Everything has spiraled out of control, and now you have only one objective: to find your missing sister in the eye of the storm. To do this, you can count on your trusty bracelet, which emanates unfathomable energy in the form of a shield. Fight against violent machines and find your way using your skills and your shield, in this vibrant pixel-based world with a synthwave vibe. A captivating story of loss and search amidst a collapsing world, which intensifies and reveals itself as the adventure unfolds. Follow the path of young Asta as she looks for her older sister through the streets of Modigard, a city verging on the end of the world. Explore four areas dominated by menacing machinery and epic bosses.