Save Friends and Take Out Enemies with Battlefield V’s Medic and Recon Classes | Blogdot.tv

Looking forward to joining the front lines when Battlefield V launches?  The latest addition to this blockbuster series is adding more depth and flexibility to its four iconic Classes. Recon, Support, Assault, and Medic are back, now with their own weapons and gadgets plus a new set of traits called Combat Roles. In this article we’ll give you an in-depth look at two of the Classes, Medic and Recon, what they’ll add to your squad and team, and how their Combat Roles let you customize each one to best suit your playstyle. 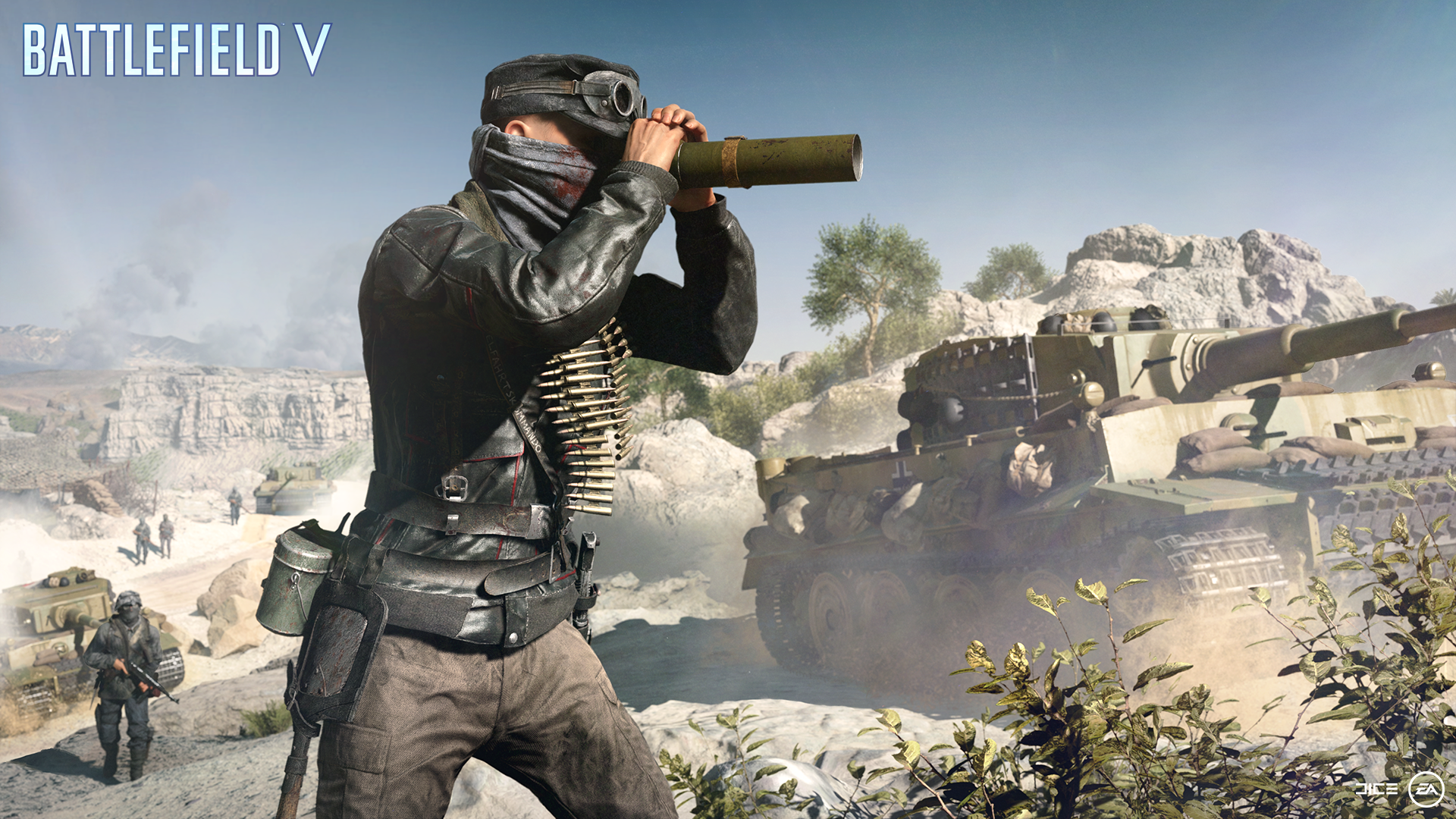 Not too worried about the loneliness of the long-distance gunner? Prefer the precision of lining up the perfect shot to a “run and gun” playstyle? Want to make sure your team gets the intelligence it needs to win the day? Recon might be the right Class for you.

Accuracy is the name of the game for this Class, and their single-shot rifles are perfect for taking care of business from a good distance. Steady hands, keen eyesight, and the patience to wait for the right shot are all keys to success. But Recon can also (with a little training) be devastating at medium range. And their gadgets are great for spotting enemies and defending choke points. 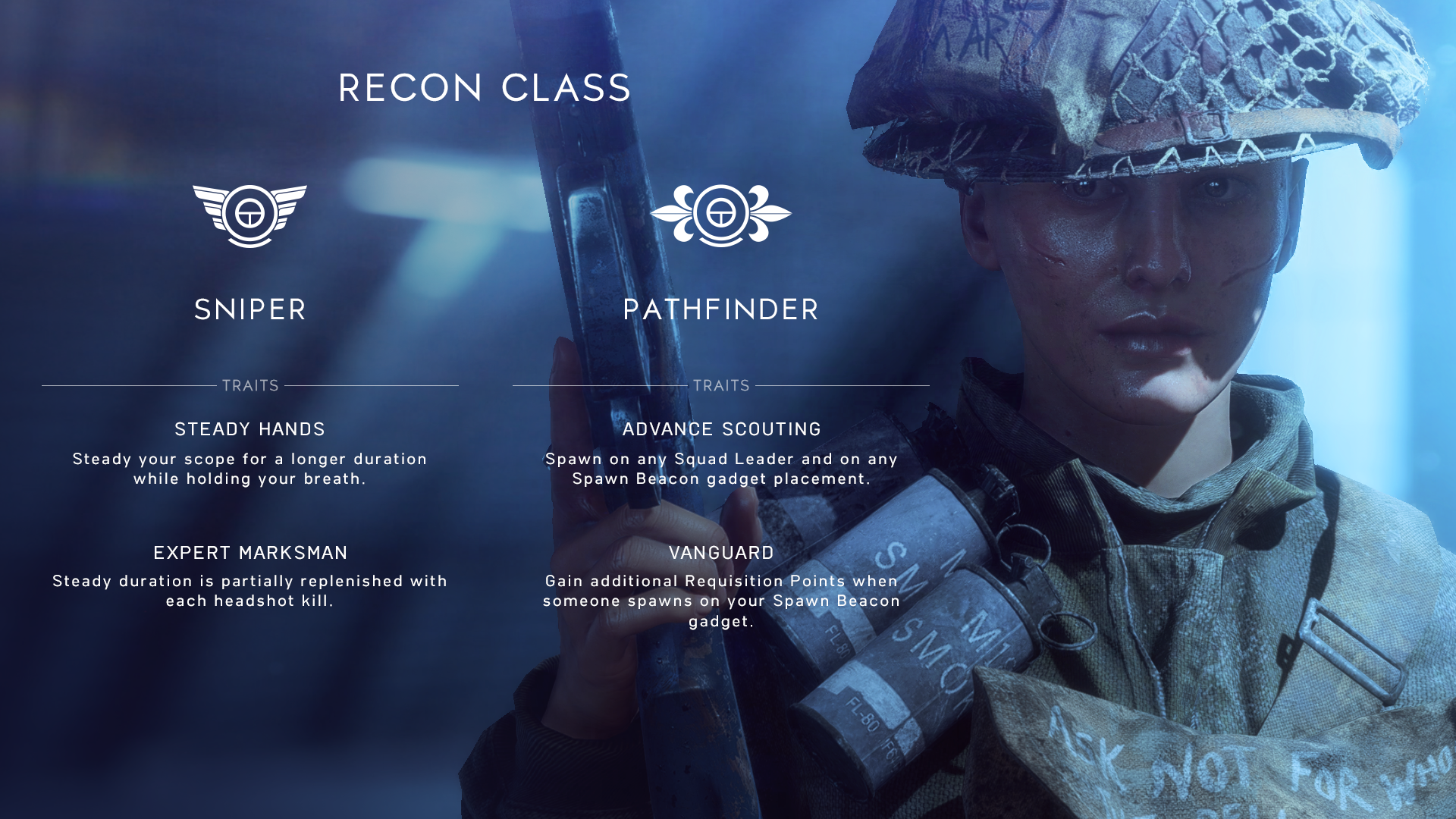 Again, you’ll get to choose from two Combat Roles for this Class. One is equipped at launch as a default and the other you’ll need to unlock during your Battlefield V career (with more available later). Choose the Combat Role and associated loadout that best suits your playstyle – you can always change them if you need to.

This default Combat Role helps you stay scoped-in on your target (or targets) even longer, giving you a perfect chance for a silent but deadly streak. Each headshot slightly extends the duration of your steadying breath, helping you keep your remaining enemies right in the crosshairs.

This unlockable Combat Role takes you much closer to the action, helping you lead your squad to the fight even when battle shifts locations. Spawn on any Squad Leader on your team (not just your own), get the intel, and deploy a Spawn Beacon to bring the rest of your squad running. Create a new route, overrun an objective, or (with a little luck) deploy behind enemy lines to gain the upper hand.

If you live by the motto “No man left behind,” and like a more cautious and thoughtful playstyle, this Class might fit you like a (rubber) glove. Medics keep their squad alive and in the fight with rapid revives and health-replenishing Medical Pouches. But that doesn’t mean they can’t deal out some serious damage of their own with their close- to medium-range weapons.

When you’re dashing to help out a fallen comrade, you need a weapon that’ll help keep you both alive long enough to complete your heal or revive, and the close-quarter SMG fits the bill perfectly. Need to reach a wounded teammate out in the open? The Smoke Grenade Launcher will give you the soft cover you need to get the job done.

Here are the weapons and gadgets available to this Class.

You’ll start with two Combat Roles, though more will become available later. One comes equipped at launch as a default and the other you’ll unlock by playing this Class. It’s important to choose the right Combat Role and associated loadout to suit your playstyle – but you can always switch them as situations on the ground change.

This default Combat Role comes in very handy when the tide of battle turns against you and your teammates. Spot your buddies as they begin to fall and make a mad dash for each one, handing out as many Medical Pouches as you can. Not only will they praise you as a courageous healthcare practitioner, but you’ll also score additional Requisition Points, letting your team call in more Reinforcements faster.

If you’re ready to be a bit more of a risk taker, this unlockable Combat Role may be perfect for you. The lower your Health, the faster you’ll sprint, either into the thick of the fight or as far away as you can get. All the while dispensing healing and revives to friends and a quick end to your enemies in melee combat.

Remember, Battlefield V is still in development, and all game features may be subject to change.

Battlefield V is now available for pre-order on the Microsoft Store. Stay tuned to Xbox Wire for the latest news and information for all things Xbox.