For over five years now, Awesome Games Studio has been busy creating an action-platformer game with rogue-lite elements that takes place inside a comic book world. The main design goal was to make a title that brings you a feeling of being an unstoppable action hero. A feeling somewhat similar to the games of old, which I enjoyed in my childhood and believe many of you are familiar with.

Titles like Contra and Metal Slug both come to mind. Both of them were an inspiration for Fury Unleashed, in terms of gameplay as well as the concept. In our game, there exists a great evil that threatens the Earth, be it ancient gods or alien invasions, and there is also a hero. You are a walking death machine in a body of your choosing; a human, an undead, or maybe a robot. The classic gameplay of old-school platform-shooters is contained and modernized in Fury Unleashed.

There are no lives nor continues here. Instead, you always start from the beginning of the comic book of your choice. The power-ups you get often stay with you through the entirety of the run, but there is also a skill tree, which lets you develop the hero even further. If I had to say, the most important design point is the combo system. This time, it’s not about defeating your opponent in a carefully estimated chain of kicks and punches.

Fury Unleashed‘s combo system is all about feeling like an action hero, plowing through the opposition that stands — or floats — in your way. Keeping up with the timer grants you different boons for your hero. For example, you are gaining shields that block the incoming damage, not breaking the combo streak, as long as you stay vigilant and active. I adore how with enough time and patience, it’s possible to clear the whole game from start to finish on a single combo streak! It’s not even a theory, as it was done a few times already, making it a nice treat for speedrunners around the world.

As you might or might not already have guessed if you are familiar with Comix Zone, that game was also an inspiration for our project. To be exact, our artist, who is also one of the main designers, is a big fan of comic books and thought of a game, that takes place inside different comics in a specially made universe. The previously mentioned game was a proof that the concept could translate into a video game, so it was a great help moving forward with the project.

Games like Spelunky and Rogue Legacy were other inspirations for us. We believe those titles revolutionized the rogue-genre, and as such, they were important from the start, as our role models of sorts. Fury Unleashed, in its default game mode, is a rogue-lite in which every run is different. Procedural generation exists within most of the game’s elements, so even when you think, that you’ve seen everything, there is a new surprise waiting at every corner.

Another inspiration of ours that came much later in the game’s production cycle was Dead Cells. Fury Unleashed‘s design went many ways in different directions than the aforementioned title, forfeiting the metroidvania model by pursuing the more-classic genres. Nevertheless, there were many elements, that both I and the rest of the team found out to be good lessons to learn from. Those resulted in improvements in aspects like interface readability, player movement, and general aesthetics of the game.

I always find it incredible at how the games that I and the others played and have such good memories with were seeds for our project to grow and bloom into something, we also love to play! As the developers, it would be the greatest reward for us, if one day someone would make an awesome title, which would list Fury Unleashed in its inspirations, as we list the games of our youth.

You can download the free trial of Fury Unleashed right now, and we also hope to see you inside one of the ever-changing pages of the comic books on May 8! 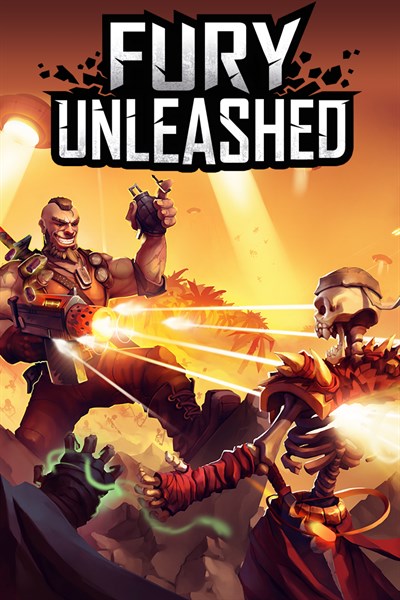 ☆☆☆☆☆
★★★★★
$19.99
Pre-order
Xbox One X Enhanced
Free Trial
Fury Unleashed is a combo-driven rougelite action platformer – each kill you make increases your combo. Hit certain thresholds and your damage resistance and healing powers will kick in! It's a game you can even beat in one ultimate combo. Are you up to the task? ABOUT FURY UNLEASHED Fury Unleashed was created by combining inspiration from modern roguelite platformers, like Dead Cells and Rogue Legacy, with nostalgic memories of old-school platformers, like Contra and Metal Slug. We have spent five years polishing our creation to make sure that your experience with the game will be as memorable as the aforementioned titles and we wholeheartedly believe that you won't be disappointed. MAIN FEATURES • Ever-changing comic book – Explore the pages of a living comic book where ink is your most valuable resource and each room is a comic panel. Find out why is John Kowalsky, creator of acclaimed Fury Unleashed series, having a creativity crisis and see if you can help him deal with it. • Gameplay-impacting combo system – Kill enemies quickly enough to unleash your fury and rip through everything in your way without getting injured. Learn to play flawlessly and beat the entire game in one, epic combo! • Game customization options – Choose either challenging Hard mode, which will put your skills to the test – or Easy mode, where you can adjust the difficulty parameters any way you want. Beat the Hard mode to unlock access to even harder Incredible and Legendary modes. Disable blood and gore if you don't like it, or if there are young children around. Go solo or bring in a friend for a local co-op session. • Choose your hero's skills to match your playstyle and modify their appearance to your liking! • Roguelite with soft permadeath – Discover worlds created by a mix of hand-designed levels and procedural generation algorithms. Choose the best items to assist you in your playthrough and unlock permanent upgrades when you'll die for your subsequent runs. • Ravishing environments – Play through the pages of visually distinctive comic books and dive into the creator's sketchbook. Master each enemy's behavior patterns and overcome a total of 40 bosses. All that accompanied by epic soundtrack composed by Adam Skorupa and Krzysztof Wierzynkiewicz, the creators of music for The Witcher, Bulletstorm and Shadow Warrior.