After finding a vintage Apollo microwave detector at a car boot sale, and realising the display hole in the top was roughly the same size as a small Adafruit screen, he saw the potential to breath new life into its tired exterior. And resurrected it as a thermal camera! 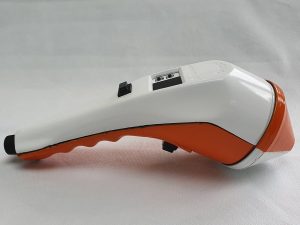 Right up top – the finished product!

Martin assumes it would have been used to test microwave levels in some kind of industrial setting, given microwave ovens were a rarity when it was produced. 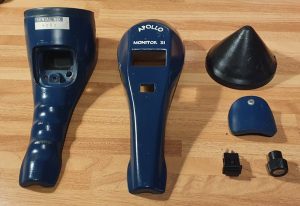 Old components stripped and ready for a refit

Anyhow, a fair bit of the original case needed to be hacked at or sawn off to make sure all the new components could fit inside.  A Raspberry Pi Zero provides the brains of the piece. Martin chose this because he wanted to run the scipy python module to perform bicubic interpolation on the captured data, making the captured images look bigger and better. The thermal sensor is an Adafruit AMG8833IR Thermal Camera Breakout, which uses an 8×8 array of sensors to create the heat image. 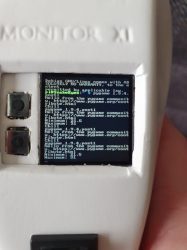 The tiny but readable display screen

The results are displayed in real time on a bright 1.3″ TFT display. Power comes from a cylindrical USB battery pack concealed in the hand grip, which is recharged by opening up the nose cone and plugging in a USB lead. Just three Python scripts control the menu logic, sensor, and Adafruit.io integration, with the display handled by PyGame.

It gets better: with the click of a button, a snapshot of whatever the thermal camera is looking at is taken and then uploaded to an Adafruit dashboard for you to look at or share later. 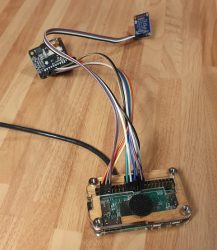 Sensor and screen wired up

Martin’s original post is incredibly detailed, walking you through the teardown of the original piece, the wiring, how to tweak all the code and, of course, how he went about giving it that fabulous BB-8 orange-and-white makeover. He recorded the entire process in this 24-minute opus:

This vintage Apollo microwave detector now has a shiny new purpose as a thermal camera, powered by a Raspberry Pi Zero with an Adafruit thermal camera sensor…

But what can you actually do with it? Martin’s suggestions range from checking your beer is cold enough before opening it, to testing your washing machine temperature mid-cycle. If you watch his video, you’ll see he’s also partial to monitoring cat tummy temperatures. His kid doesn’t like having his forehead Apollo Pi’d though.

Check out more of Martin’s projects on hackster.io.