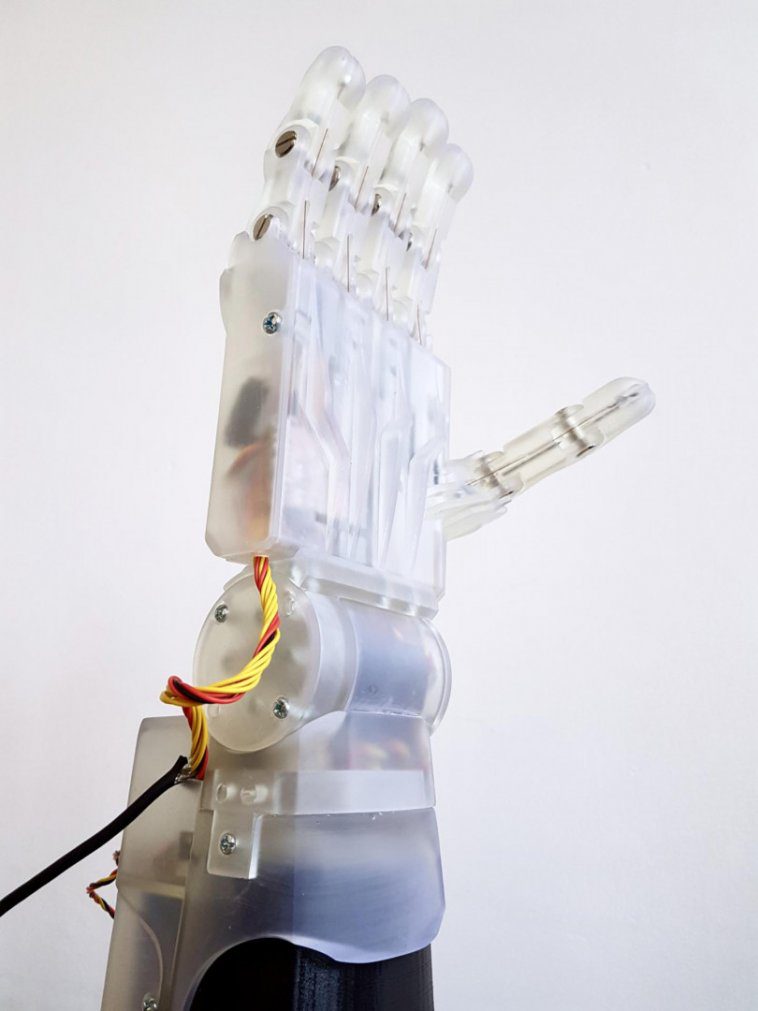 Researchers from the University of Manchester have developed an extremely affordable 3D printed robotic prosthetic hand. The assistive device enables groundbreaking functionality for amputees, and can be fully customized for the user via an Android app.

A team of designers from the University of Manchester have recently created a robotic hand prosthetic with 3D printing technology. The development could potentially slash production costs for assistive devices, offering a more affordable alternative for amputees.

This new prosthetic can be seen as more than just a cheap alternative, but also as a functional improvement over traditional devices. The joints of the prosthetic hand are fully posable, meaning that each individual finger and thumb can be moved independently. In the real world, the 3D printed hand would provide amputees with an opportunity to handle everyday tasks such as picking up items, using a knife and fork, clicking a mouse, or even playing rock-paper-scissors.

Usually, these expanded functionalities do not come without a hefty price. However, that’s where the prototype really stands out as a groundbreaking device. The engineers from University of Manchester built the hand for just around £307 ($433 USD). On top of that, the creators firmly believe that the production cost can be reduced further. To give you some context, advanced prosthetics like this one usually come with exorbitant price tags, costing anywhere in the range of £25,000 ($35,000 USD) to £60,000 ($85,000).

The team 3D printed the robotic prosthetic using stereolithography (SLA) 3D printing. The technique uses resin material, which is solidified into a 3D model using a high-powered laser. The researchers also plan to test out Fused Deposition Modeling (FDM) 3D printing, which could bring the price down even lower.

The UK’s National Health Service (NHS) estimates that there are around 6,000 limb amputations carried out each year in the country. Furthermore, whilst non-robotic limbs are available for cosmetic purpose, robotic ones have the power to transform lives and restore functionality to the user.

But the University of Manchester researchers want to combine functionality and aesthetics, producing a prosthetic that amputees can wear proudly.

“Not only do we want to make it affordable, we want people to actually like the look of it and not be ashamed or embarrassed of using or wearing it. Some traditional prosthetics can both look and feel cumbersome or, those that don’t, are extremely expensive. We think our design really can make a difference and we will be looking to commercialise the project in the future,” said Alex Agboola-Dobson, a Mechanical Engineering Master at the University of Manchester.

And, if that isn’t interesting enough, the prototype also includes a Bluetooth connection and also comes with its own Android app. This enables wearers to control the robotics via muscle sensors on the arm. Additionally, the extent of the prosthetic hand’s functionality is fully customizable through the Android app.

Recently, the design of the prosthetic hand won an award for the “Best New Development” in the Digital Innovation Challenge at the recent Industry 4.0 Summit and Factories of the Future Expo.

License: The text of „Researchers 3D Print Functional Robotic Prosthetic Hand at a Fraction of the Cost“ by All3DP is licensed under a Creative Commons Attribution 4.0 International License.