Welcome to the world of high speeds, colorful tracks, and wicked stunts. The stunt driving game that won the hearts of thousands of players around the globe is finally on Xbox One and Xbox Serires X|S —Rekt! High Octanes Stunts is here!

As a child, I used to love games you can just sink your teeth in. Games I could play for hours, just trying to beat that one level that eludes me, to finish that one challenge, to beat my friend’s impossible high score. Someone must’ve heard my prayers because I am now proud to publish Rekt!, which is exactly that type of a game! Inspired by timeless classics such as Rush and Tony Hawk’s Pro Skater, Rekt! brings limitless hours of fun.

For weeks after work, I’d load up the game at home and the sheer smoothness with which you can perform the tricks kept me from putting down the controller. And that’s the thing: while trying to complete the challenges on each map was my main objective, it was genuinely fun to just drive around and experience the flow of chaining the tricks together.

And chain the tricks I did! Competing on the leaderboards scratches that competitive itch that many of us have. But obviously, that’s not all there is. Besides the challenges that you can complete in each level, Rekt! also comes with a 4-player local multiplayer mode that lets you stunt on your friends.

You can compete in 4 different game modes, one of them is simply trying to style on them and get the highest score, a racing mode called Checkpoint, a classic capture the crown mode, and finally Virus, which is basically a zombie mode with cars. But remember, if you get wrecked, you can always come back to practice mode, and train to show them who’s boss next time. Get Rekt! High Octane Stunts today on the Xbox Store for Xbox One and Xbox Series X|S. 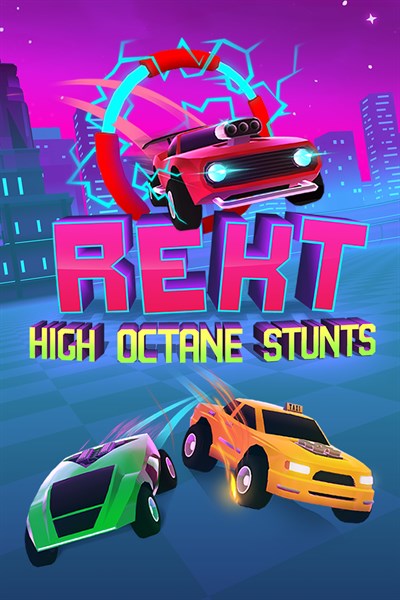 ☆☆☆☆☆ 3
★★★★★
$5.99
Get it now
REKT! is a stunt, driving game inspired by the eternal classics like Rush and Tony Hawk's Pro Skater series. In quick gameplay sessions, you will complete various challenges to unlock cars, arenas, and customizations. Do outstanding tricks and stunts to get the highest scores and face other players – rule the leaderboard! The physics model in REKT makes performing tricks incredibly smooth and easy but don’t get too comfortable – it's easy to learn but hard to master. Over 170 000 active players and GROWING. MASTER ALL TRICKS! Take on the challenge and master the most awesome stunts: aerial flips, barrel rolls, loops, grinds, drifting and much more – combine them all and break your best scores!! CHALLENGES! Every time you enter the arena you will be given a set of challenges. Many variables can increase or decrease their difficulty creating an infinite amount of objectives, that will attract even the most seasoned players. Endless tasks include checkpoint races exclusively designed for different arenas. SOLO RIDE! Practice your stunts, unlock various cars and discover arenas in 2 singleplayer game modes: HIGH SCORE: The main game mode, inspired by the old-school arcades, will allow you to take on the challenge of the global leaderboard – remember the time is running, although there are ways to extend it. PRACTICE: Practice makes perfect, in this game mode, time does not matter, train as much as you wish – get prepared to #GETREKT MULTI RIDE! Face the opponents in a local competitive mode (up to 4 players) and battle them on the way to the victory. SCORE – challenge your competitors and get the highest score. VIRUS – spread the infection by crashing into other players or avoid being infected – last car standing wins! CHECKPOINT – first to hit a checkpoint gets a point – collect 5 points to win the race. CAPTURE THE CROWN – you have 90 seconds to defend the crown – don’t let others take it over – or you won’t reign supreme in the arena.

Related:
How to Quickly Escape the Gutwhale
Experience Shadow and Sun in the Latest Paladins Update
The McLaren 570S is Coming Back to Rocket League