All across the UK, you’ll find train departure boards on station platforms that look like this:

They’ve looked this way for as long as I can remember (before they were digital dot-matrix displays, they were made from those flappy bits of plastic with letters of the alphabet and numbers printed on them, which whirled round like a Rolodex; they still look very similar). If you’re a frequent train traveller in the UK, you probably have a weird emotional response to seeing one of these. Mine is largely one of panic about being late.

Some people have a more…benign relationship with trains than I do, like Chris Crocker-White, who has adapted a build tweeted by Chris Hutchinson to make a miniature departure board for his desk. Here’s the tweet that started it all:

Pretty hyped about my most recent @Raspberry_Pi project – a realistic, real-time, train departure board I’ve open sourced the software over at: https://t.co/vGQzagsSpi Next step: find a case and make it a permanent fixture! https://t.co/HEXgzdH8TS

Chris C-W’s build is similar, but has a couple of very neat upgrades, including some back-end software work (his build runs in Docker on balenaCloud, to make configuration easier), and some work on the display, which he’s tweaked to use 1:1 pixel mapping of the fonts and avoid any scaling, so the tiny board looks more like the dot-matrix LED displays you’ll see when you visit the station. You can see the difference in the image below:

Chris seems to be using his board as a piece of desktop furniture, where it looks terrific, but model train or narrow-gauge enthusiasts should be all over this project too; it’s a lovely way to inject some realism into a miniature setup. You can find a very complete guide to making your own here. 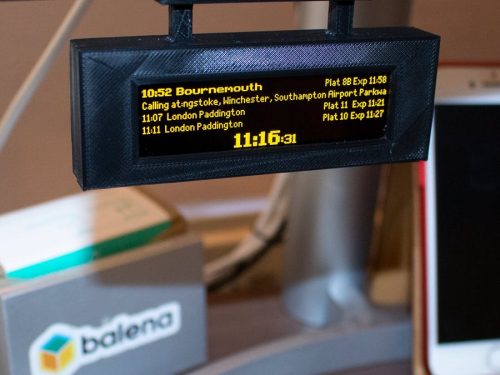 Now, if you’ll excuse me, I have a train to catch.