Hi everyone! Last week we shared part one of The Sinking City hero origin story and we heard you liked it. If you missed it, you can still read it here.

In The Sinking City, you play as Charles Reed, a 1920s private investigator tortured by his past and seeking to salvation while exploring a strange flooded city. We finally could make sense of Charles’s scattered notes, so without further ado, please enjoy the second part of our The Sinking City short origin story!

It happened again last night. I woke up next to this flooded narrow hole in the ground, a hundred meters away from the USS Cyclops debris… and the decaying bodies of my friends. Judging by the dirt under my nails, I tried to dig my way into it. What’s so important down there, I wonder?

That hole was the first thing I saw after I was washed ashore this god-forsaken island. I think it’s been two weeks, and I haven’t seen a single soul since then, well, living soul anyway. I buried some of my crewmates, the ones I managed to carry to their improvised graves anyway… I haven’t eaten anything aside from the rotten shellfish I found on the seashore when I woke up. I can barely move, but strangely enough, it seems like I magically gain a lot of strength at night if I’m able to sleepwalk all the way across the island from my comfy cave to that stinking pit.

That hole is not the only foul thing here. This whole place smells like death, there’s something in the air that I cannot escape. I carry the gun I found on one of the bodies, but even though there are bullets in the clip, I have no use for it. It’s not like I can go hunting for food. The whole place is dead. It’s been three more days. I’m pretty desperate. Have to do something, because otherwise I’ll just starve to death. I’m going in that hole. What’s the point of being a Navy diver if I can’t dive in a hole in the ground?

I crawled into the pit. The water was lukewarm and thick like blood or oil. I held my breath and dived, trying to push my body down as fast as I could. Who knows how deep this is, but I don’t think I’ll die here. I survived the shipwreck, ended up on this island, with this hole calling out to my sleeping self. It’s all happening for a reason, and I doubt that reason is for me to drown in this cesspool. Wouldn’t be poetic.

When I finally reached the bottom, I saw a glimpse of light ahead. I rushed toward it, and emerged into what seemed to be an underground cave. Trying to catch my breath, I looked around. Something caught my attention, the same unnatural ruins that I saw in my dreams on the Cyclops. Now that I can see them clearly, they looks like some sort of a lair, with two diagonal rocks facing each other. I want to touch them.

Agonizing pain shot through my palm the moment I land it on one of the rocks. They lit up, emitting strange glowing into the air, yellowish marks started to appear on them. They seemed like a gate to another dimension, it was like someone or something was about to come through it. I looked up and suddenly saw the skies – was I not in a cave this whole time?

I caught a glimpse of a slimy black worm burrowing into my hand. I tried to shake it off, but it was gone in a moment. Sudden clarity came upon me, I was on my knees staring at the gates, finally I saw an enormous shadow in it… No, there was nothing. 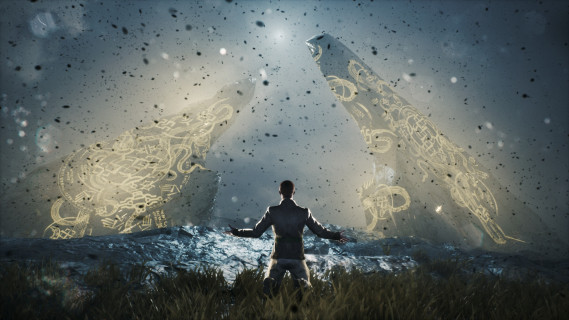 “Wake him up!” a voice penetrated the silence, their hands were shaking my restless body. When I opened my eyes I saw a few men standing around me, military, judging by their uniforms. When they were carrying me to their boat, I looked around. I saw a dark silhouette, pointing in the direction of the flooded hole. I knew I was the only one who saw it. “It’s okay”, I thought. “I know what I saw. I know there’s something out there, and I will find it”.

“Sir”, I said and one of the soldiers looked at me. “Get the bodies on the beach, please! Their families must learn what happened to them”.

“Bodies” I repeated suddenly becoming annoyed. “You must have seen the debris of my ship, and the rotting corpses too. Ring a bell?”

“Look, pal, I have no idea what you are on about. There’s no bodies here, no debris, no nothing. You seeing things or something?”

The end. Well, the end of that story, which marks the beginning of The Sinking City, our adventure and investigation game inspired by the works of H.P. Lovecraft. Play as Charles W. Reed, private investigator, to uncover the truth of what possesses the half-submerged city of Oakmont, right now on Xbox One!

The Sinking City is available now on the Microsoft Store for Xbox One. Click here for purchase details.