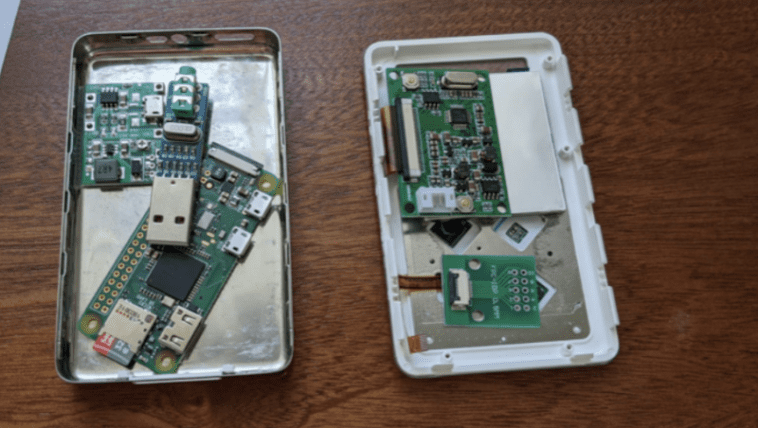 Recreating Apple’s iconic iPod Classic as a Spotify player may seem like sacrilege but it works surprisingly well, finds Rosie Hattersley. Check out the latest issue of The MagPi magazine (pg 8 – 12) for a tutorial to follow if you’d like to create your own.

When the original iPod was launched, the idea of using it to run anything other than iTunes seemed almost blasphemous. The hardware remains a classic, but our loyalties are elsewhere with music services these days. If you still love the iPod but aren’t wedded to Apple Music, Guy Dupont’s Spotify hack makes a lot of sense. “It’s empowering as a consumer to be able to make things work for me – no compromises,” he says. His iPod Classic Spotify player project cost around $130, but you could cut costs with a different streaming option.

“I wanted to explore what Apple’s (amazing) original iPod user experience would feel like in a world where we have instant access to tens of millions of songs. And, frankly, it was really fun to take products from two competitors and make them interact in an unnatural way.”

Guy’s career spans mobile phone app development, software engineering, and time in recording studios in Boston as an audio engineer, so a music tech hack makes sense. He first used Raspberry Pi for its static IP so he could log in remotely to his home network, and later as a means of monitoring his home during a renovation project. Guy likes using Raspberry Pi when planning a specific task because he can “program [it] to do one thing really well… and then I can leave it somewhere forever”, in complete contrast to his day job.

Guy seems amazed at having created a Spotify streaming client that lives inside, and can be controlled by, an old iPod case from 2004. He even recreated the iPod’s user interface in software, right down to the font. A ten-year-old article about the click wheel provided some invaluable functionality insights and allowed him to write code to control it in C. Guy was also delighted to discover an Adafruit display that’s the right size for the case, doesn’t expose the bezels, and uses composite video input so he could drive it directly from Raspberry Pi’s composite out pins, using just two wires. “If you’re not looking too closely, it’s not immediately obvious that the device was physically modified,” he grins.

Guy’s retro iPod features a Raspberry Pi Zero W. “I’m not sure there’s another single-board computer this powerful that would have fit in this case, let alone one that’s so affordable and readily available,” he comments. “Raspberry Pi did a miraculous amount of work in this project.” The user interface is a Python app, while Raspberry Pi streams music from Spotify via Raspotify, reads user input from the iPod’s click wheel, and drives a haptic motor – all at once.

Most of the hardware for the project came from Guy’s local electronics store, which has a good line in Raspberry Pi and Adafruit components. He had a couple of attempts to get the right size of haptic motor, but most things came together fairly easily after a bit of online research. Help, when he needed it, was freely given by the Raspberry Pi community, which Guy describes as “incredible”.

Part of the fun of this project was getting the iPod to run a non-Apple streaming service, so he’d also love to see versions of the iPod project using different media players. You can follow his instructions on GitHub.

Next, Guy intends to add a DAC (digital to analogue converter) for the headphone jack, but Bluetooth works for now, even connecting from inside his jacket pocket, and he plans to get an external USB DAC in time.