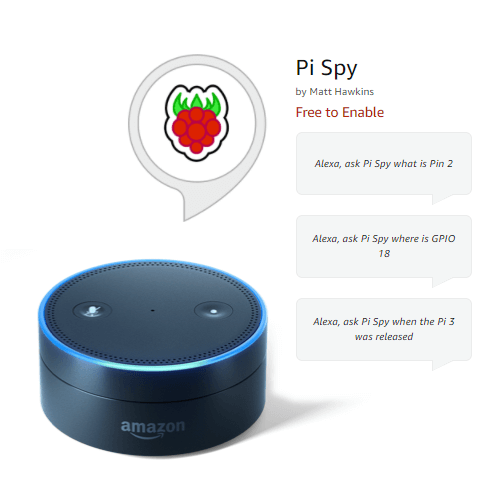 The Alexa system uses Skills to provide voice-activated functionality, and it allows you to create new Skills to add extra features. With the Pi Spy Skill, you can ask Alexa what function each pin on the Raspberry Pi’s GPIO header provides, for example by using the phrase “Alexa, ask Pi Spy what is Pin 2.” In response to a phrase such as “Alexa, ask Pi Spy where is GPIO 8”, Alexa can now also tell you on which pin you can find a specific GPIO reference number.

This information is already available in various forms, but I thought it would be useful to retrieve it when I was busy soldering or building circuits and had no hands free.

There is a learning curve to creating a new Skill, and in some regards it was similar to mobile app development.

A Skill consists of two parts: the first is created within the Amazon Developer Console and defines the structure of the voice commands Alexa should recognise. The second part is a webservice that can receive data extracted from the voice commands and provide a response back to the device. You can create the webservice on a webserver, internet-connected device, or cloud service.

I decided to use Amazon’s AWS Lambda service. Once set up, this allows you to write code without having to worry about the server it is running on. It also supports Python, so it fit in nicely with most of my other projects.

To get started, I logged into the Amazon Developer Console with my personal Amazon account and navigated to the Alexa section. I created a new Skill named Pi Spy. Within a Skill, you define an Intent Schema and some Sample Utterances. The schema defines individual intents, and the utterances define how these are invoked by the user.

Here is how my ExaminePin intent is defined in the schema:

Example utterances then attempt to capture the different phrases the user might speak to their device.

Whenever Alexa matches a spoken phrase to an utterance, it passes the name of the intent and the variable PinID to the webservice.

In the test section, you can check what JSON data will be generated and passed to your webservice in response to specific phrases. This allows you to verify that the webservices’ responses are correct. 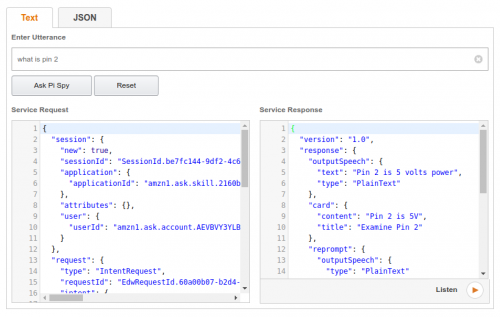 Over on the AWS Services site, I created a Lambda function based on one of the provided examples to receive the incoming requests. Here is the section of that code which deals with the ExaminePin intent: 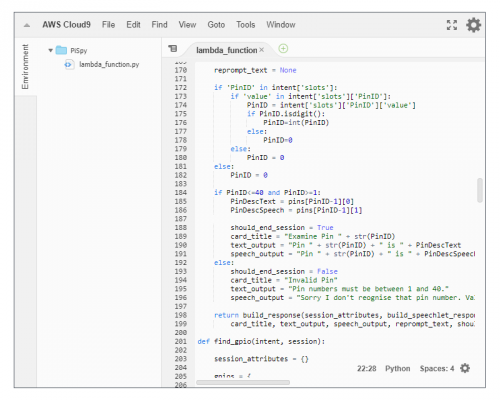 For this intent, I used a Python dictionary to match the incoming pin number to its description. Another Python function deals with the GPIO queries. A URL to this Lambda function was added to the Skill as its ‘endpoint’.

As with the Skill, the Python code can be tested to iron out any syntax errors or logic problems.

With suitable configuration, it would be possible to create the webservice on a Pi, and that is something I’m currently working on. This approach is particularly interesting, as the Pi can then be used to control local hardware devices such as cameras, lights, or pet feeders.

My Alexa Skill is currently only available to UK users. I’m hoping Amazon will choose to copy it to the US service, but I think that is down to its perceived popularity, or it may be done in bulk based on release date. In the next update, I’ll be adding an American English version to help speed up this process.