The newest Paladins update features a Battle Pass powered by the energy of the cosmos itself! The age of Darkness comes to an end, banished to the horizon by the cleansing light of Radiant Stars! Called forth from the heavens, the Radiant Stars have sworn an oath to stand for all that is good and righteous in the galaxy – and now you can join their forces!

The highlight of the latest update is four amazing Radiant Stars skins. Stellar Protector Io defends the heavens while Stellar Sentinel Inara patrols the celestial domain to enforce peace and justice. Stellar Sorceress Imani wields mystical cosmic power, charging into battle with healing support from Stellar Mender Seris. And unlocking these four amazing stellar skins is just the beginning of a cosmic adventure which will allow players to unlock seven additional variants for each skin. A total of 32 skins await you in the Radiant Stars Battle Pass!

As if over a hundred levels of cosmic content weren’t enough, we’re also premiering an all new way to earn free Paladins content just for playing! The Radiant Stars update introduces the new Bounty system, where players can earn Bounty Coins for completing daily quests. Bounty Coins can be redeemed in the Bounty Store for a rotating selection of Champion skins. Complete quests, earn coins, and redeem them for skins – it’s just that easy!

This patch also sees the introduction of a whole slew of new bug fixes and balance changes. As Paladins enters the second half of 2020, we are firmly committed to our goal of making this the Best Year Ever for Paladins! Whether you’re a returning player who is looking to grab the latest Paladins content or a new Champion just playing for the first time, there has never been a better time to jump into Paladins and start playing for free! 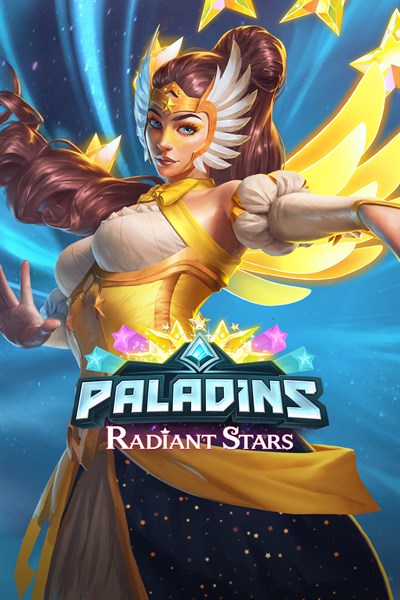 ☆☆☆☆☆ 636
★★★★★
Get it now
Xbox One X Enhanced
Enter a fantasy world of ancient technology in Paladins, a team-based shooter with strategy elements and deep character customization. Through a unique collectible card system, players can amplify and augment a character’s core set of abilities to play exactly how they want to play.

Related:
Journey Through the Wastes of Hell in Neverwinter: Avernus
Lost Wing: Speed, Action, and High Scores Come to Xbox One Today
Ashen Lords Land on the Sea of Thieves in July’s Free Ashen Winds Update