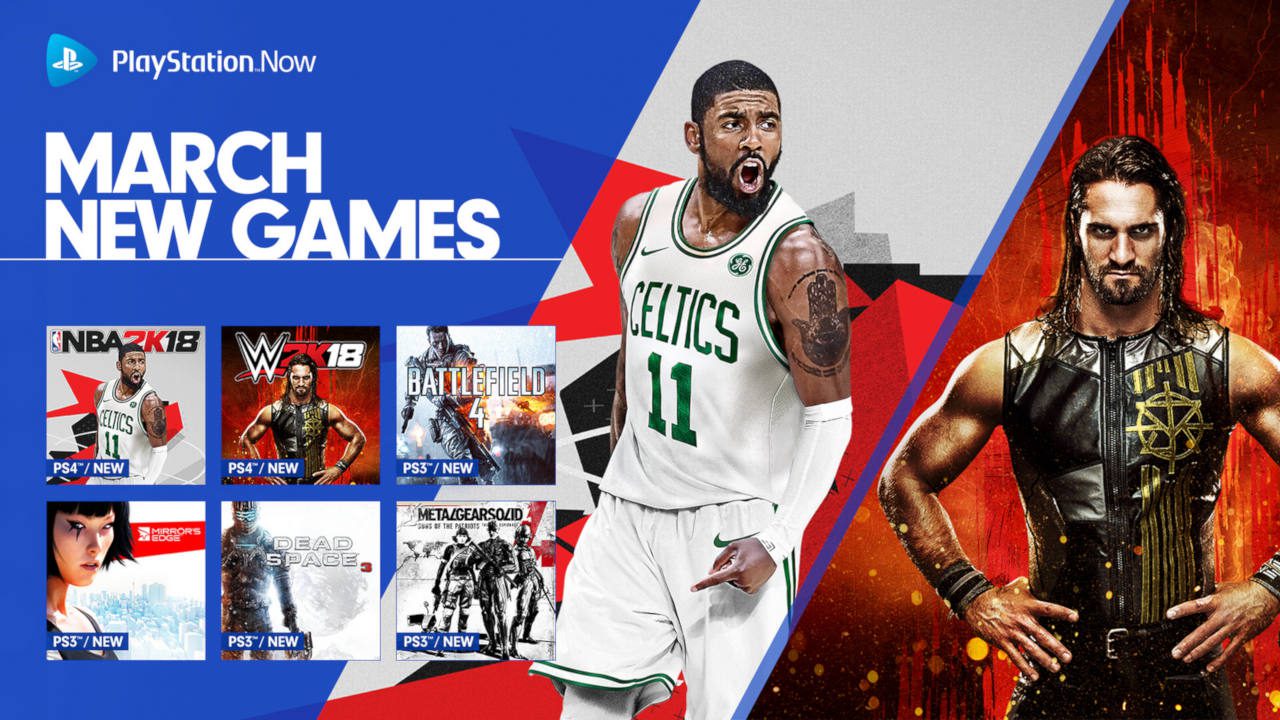 Hello, PlayStation Now fans! Spring is officially here, and today we’re adding a dozen new games to the PlayStation Now library of more than 750 games in all, including hits from 2K Games, EA, and Konami. Check out NBA 2K18, WWE 2K18, Battlefield 4, and Metal Gear Solid 4: Guns of the Patriot, and more, available starting today!

Run the neighborhood with NBA 2K18 for PS4 (available for download or stream), featuring collectible cards, a new motion system for improved animation, special guest commentary from Kobe Bryant and Kevin Garnett, as well as All-Time franchise rosters and 62 of the NBA’s greatest teams from the past. Build your career in NBA games, hit the courts in The Playground, join the Pro-Am circuit, explore the open neighborhood setting, and much more.

If wrestling is more your style, check out WWE 2K18 for PS4 (download or stream). With new eight-man matches, a new and improved rendering engine, the ability to build your own WWE superstar in MyCareer and fight your way to WrestleMania, and the competitive online Road to Glory mode, WWE 2K18 has everything a wrestling fan could ask for.

We’ve also got three of EA’s biggest PS3 franchises available to stream starting today. Experience the intense and cinematic Battlefield 4, journey across space and discover the source of the Necromorph outbreak in the terrifying two-player co-op Dead Space 3, and jump from dizzying heights in the stylized and fast-paced Mirror’s Edge.

In Konami’s epic Metal Gear Solid 4: Guns of the Patriots, become a battle-weary Solid Snake and travel through the Middle East, South America, and Eastern Europe in a battle-scarred future where huge conglomerates employ mercenary armies in a struggle for supremacy.

Here is the full list of the twelve games joining PS Now this month to download (PS4 and PS2 games) and stream (all games):

Here are the most played PS Now games during the month of February:

If you haven’t tried PlayStation Now yet, now’s the perfect time to give it a spin with the seven-day free trial for PS4 and PC. (Terms apply. New Subscribers only. Credit card required. See here for details.)