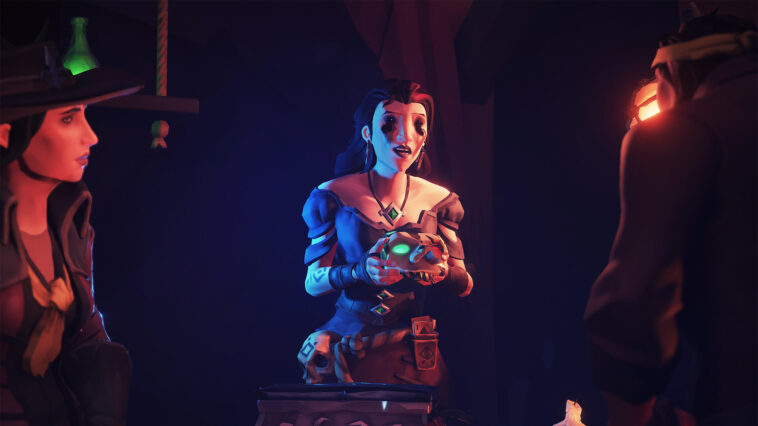 The festive season has come and gone, but while pirates across the waves were busy celebrating Grogmanay, the Order of Souls were hard at work. Hoping to cure Tasha the tavern keeper of a skeletal curse that’s consuming her, Madame Olivia has now recovered memories of Captain Briggsy – the notorious rogue who once searched far and wide for the rumoured restorative that would free her from her own fleshless fate.

Memories of the Mask

Sea of Thieves’ previous Adventure, ‘The Rogue’s Legacy’, tasked pirates with recovering keepsakes hidden by Briggsy long ago, intended to train Tasha in pirate practices as she went about retrieving them (if you need to learn more about this quest, our latest Adventures Ahead article can fill in the blanks). Three of these gifts were successfully delivered to Madame Olivia at Plunder Outpost, but that was only the beginning of the story…

All too aware how dangerous it would be to place a Skeleton Lord’s spirit back into their waiting skull, Madame Olivia has accomplished an equally tricky task, imbuing Briggsy’s distinctive mask with the memories of its former owner. How close was Briggsy to locating the cure she so desperately sought? The only way to find out is for pirates to take up the mask, learn the truth from Briggsy herself and journey to The Wilds in her wake.

Inquisitive crews will soon discover that Briggsy’s mask confers more than one advantage. Its jewelled eye is no mere gemstone; rather, it houses Ancient knowledge of secret starfields, each very different from the night sky to which pirates have become accustomed. When considered correctly, these constellations reveal a long-forgotten tale of duty and sacrifice that set Briggsy on her path to the cure, though all may not be quite as it seems…

Picking up the quest that Briggsy began so long ago is a considerable undertaking. Cunning and curiosity will be needed in equal measure if Tasha is to be saved, especially when The Wilds continue to bloom with strange, lush patches that suggest powerful forces are at work behind the scenes. To start your journey into ‘The Secret Wilds’, begin the Adventure by speaking with Larinna outside the tavern at any time between now and February 2.

Elsewhere on the waves, the Battle for the Sea of Thieves continues to rage between the Guardians of Fortune and the Servants of the Flame. The team at Rare have been hard at work improving the PvP matchmaking feature set based on player feedback, with the aim of allowing Faction crews to seek out combat much more swiftly. As detailed in the latest release notes, today’s content update not only delivers a new Adventure but includes a number of enhancements to these on-demand ship encounters, including same-Faction battles designed to boost the pool of viable opponents and get battle-hungry crews into the fray with a minimum of waiting.

New to Sea of Thieves? Find out about the latest free content updates on our What’s New page, get familiar with Who’s Who or pick up some gameplay tips from our Pirate Academy, which provides invaluable information on topics ranging from sailing to swordplay as you prepare for your maiden voyage. Learn more about Sea of Thieves here, or join the ongoing adventure at www.seaofthieves.com where you can embark on an epic journey with one of gaming’s most welcoming communities!

☆☆☆☆☆986
★★★★★
$39.99 $31.99
Xbox One X Enhanced
PC Game Pass
Xbox Game Pass
Xbox Live Gold membership required to play on Xbox One; sold separately. ========= About the game
Sea of Thieves offers the essential pirate experience, from sailing and fighting to exploring and looting – everything you need to live the pirate life and become a legend in your own right. With no set roles, you have complete freedom to approach the world, and other players, however you choose. Whether you’re voyaging as a group or sailing solo, you’re bound to encounter other crews in this shared world adventure – but will they be friends or foes, and how will you respond? A vast open world
Explore a vast open world filled with unspoiled islands, sunken ships and mysterious artefacts. Take on quests to hunt for lost treasure, seek out cursed Skeleton Captains or gather valuable cargo for the Trading Companies. Go hunting and fishing or choose from hundreds of optional goals and side-quests. Unforgettable stories
Play through the Tall Tales to experience Sea of Thieves’ unique take on a story-driven campaign. With 11 tales to play through across two epic storylines, these immersive and cinematic quests provide around 30 hours of the ultimate pirate fantasy. Become Legend On your journey to become a Pirate Legend you’ll amass loot, build a reputation and define a unique personal style with your hard-earned rewards. Adventurer. Explorer. Conqueror. What will your legend be? A game that’s always growing
With five major expansions and almost a year’s worth of monthly updates, Sea of Thieves is a service-based game that is continually growing and evolving. Check back each month to see what new content has been added.