The desert sands are shifting, buffeted about by winds swept down from another age. What treasures will be uncovered? Well, if you’re a Paladins player, the answer is an entire Battle Pass full of Egyptian-themed content! The Sands of Myth Battle Pass has arrived in Paladins’ newest update featuring new skins for Tiberius, Raum, Ying, and Maeve, not to mention over 100 other rewards! This update also includes a rework of our Frog Isle map, the introduction of our new Death Card and Commendation system, and a whole lot more. Let’s dive in to discuss what makes us so excited about this update!

Ancient Egypt was a land of untold mystery and unmatched beauty. Our Sands of Myth update hopes to capture some of that beauty and mystery with a slew of content inspired by ancient Egypt. Tomb Keeper Tiberius protects the burial grounds of the Pharaoh from trespassers with his martial prowess, while Crypt Guardian Raum does the same with his terrifying, undead visage. Who would dare to intrude upon the resting place of the Pharaohs with these vicious protectors? Probably Emerald Bandit Maeve, who knows no fear when the promise of untold riches is involved! Rounding out the Champion skins is Divine Daughter Ying, who harnesses the power of her hieroglyph-bedecked mirror to give praise to the gods of the Nile. Whether you’re a regular Howard Carter or just a fan of Brendan Fraser in The Mummy, we think you’ll enjoy these amazing skins.

But this update isn’t just about one of the greatest empires that has ever ruled the face of the earth. It’s also about frogs. Yes, you heard that right – we’ve given the Frog Isle Map a huge cosmetic overhaul, most notably to add approximately 700% more frogs. Just look at the below screenshot – can you believe all these frogs?! We told Alex, our level designer, that he may have been overdoing it on the frogs, and he responded by just adding more frogs. We’ve got frog statutes, frog murals, frogs with waterfalls coming out of their mouths – it’s frogs all the way down! And it’s playable right now in the Siege queue!

A few other changes in this update we’d like to share, if you haven’t already wandered off to play the new Frog Isle map: Death Cards and Commendations. First, Death Cards. In an attempt to streamline the match flow of Paladins, this update sees the Killcam system replaced with the new Death Card system. Death Cards are simple: any time a player is eliminated during a match, they will see a Death Card from the player that killed them. Think of it as a calling card to remind your enemies who the real MVP is. Death Cards can be earned in Battle Passes (starting with the Pepper Death Card in Sands of Myth!) or purchased in the Shop. Similarly, we have replaced the Top Play feature with the new Commendation system. This new system will allow you to reward your teammates with commendations after each match, and to be recognized in kind for your contribution to your team. Earning commendations will also earn you rewards over time, so the best team players will have a chance to show off how they have been recognized for their team work (which, from what we’ve been told, makes the dream work).

As usual, the Sands of Myth update also features a huge collection of balance changes and bug fixes. We hope to see you in the Realm in Sands of Myth, available right now on Xbox One! 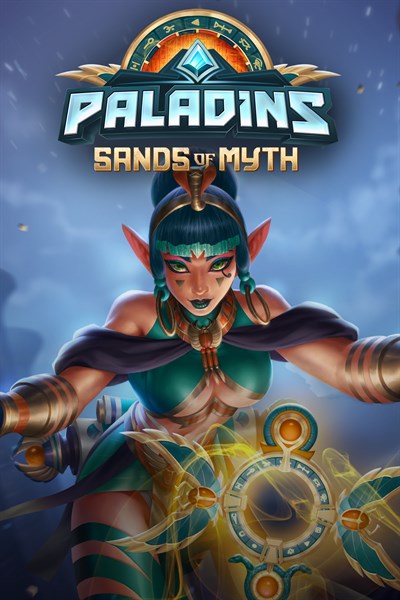 ☆☆☆☆☆ 608
★★★★★
Get it now
Xbox One X Enhanced
Enter a fantasy world of ancient technology in Paladins, a team-based shooter with strategy elements and deep character customization. Through a unique collectible card system, players can amplify and augment a character’s core set of abilities to play exactly how they want to play.