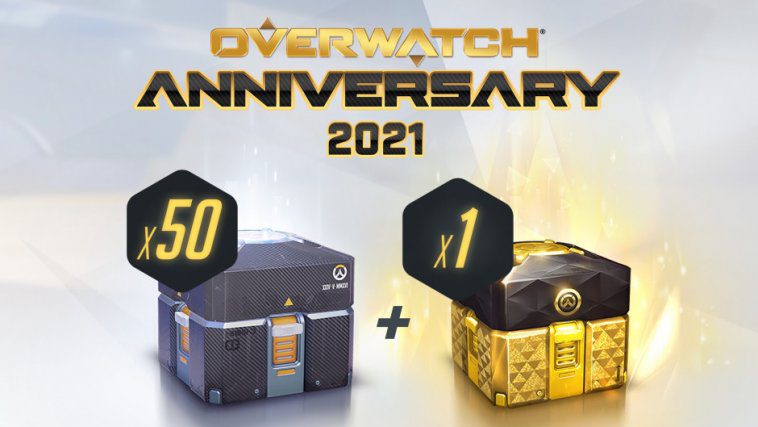 Group up and party on the payload during the annual Overwatch Anniversary event on Xbox One and Xbox Series X|S. Overwatch is bringing back fan-favorite brawls and packing Anniversary Loot Boxes with commemorative items from the past and five new legendary skins!

With the launch of the Overwatch Anniversary event, players will also find a new way to earn weekly rewards. Play games in Quick Play, Competitive Play, or the Arcade to unlock sprays, player icons, and stylish skins like Cybermedic Ana, Bird of Paradise Echo, and 8 Ball Wrecking Ball. Wins count as two games. Each week brings new rewards to earn!

As part of the Overwatch’s Anniversary celebration, they’re unlocking the brawl vault, giving you the chance to dive back into your favorite modes from earlier seasonal events. Check out the schedule below to see when your favorite brawls will be back (regional times may vary).

In addition to earning Anniversary Loot Boxes by purchasing them in the shop, unlock one Legendary Loot Box just for logging in. But don’t wait too long – claim these Loot Boxes before the party’s over on June 8!

☆☆☆☆☆ 517
★★★★★
$59.99
Get it now
Online multiplayer only. Requires Xbox Live Gold, sold separately. Join the fight for the future in the Game Awards’ winner of “Best Ongoing Game.” Take your place in the world of Overwatch and choose your hero from a diverse cast of soldiers, scientists, adventurers, and oddities. Bend time, defy physics, and unleash a dizzying array of extraordinary powers and weapons. Engage your enemies in iconic locations from around the globe in the ultimate team-based shooter. This download includes: • The full game • 5 Legendary Hero Skins • 5 Epic Hero Skins • 5 Origin Hero Skins • And more!