The end of November is full of events in World of Warships: Legends and World of Tanks! World of Warships: Legends is featuring the Japanese Navy this month, adding a new cast of destroyers and two campaigns, plus a pair of new Legendary tier ships. Over on the shore, this is your last chance to claim one of the rarest and most coveted Black Edition tanks available in World of Tanks with the Back in Black Challenge!

Ready to claim your Black Edition tank in World of Tanks? The Back in Black Challenge is easy – simply complete a series of goals to claim Silver, Premium Time, and season points and at the end select your ultimate prize: one of three must have Black Edition Tanks! The Black Edition T-34-3 is best suited to devastating brawls, while the Black Edition STA-2 enjoys harrying the enemy flank, and the Black Edition AMX CDC delivers destruction from afar. Incredible XP earn rates make any of these tanks a must have in the elite tank commander’s garage. While you’re claiming your free Black Edition tank, stop in the store and celebrate Black Friday with some of the best deals of the year on tanks, premium time and more.

Back on the high seas, a new line of Japanese destroyers joins the waters in World of Warships: Legends, bringing some alternatives to the tried and true Japanese torpedo boats. Coming out of the gate fully released, the Minekaze, Hatsuharu, Shiratsuyu, and Akizuki join the high seas, carrying more capable main battery guns than their torpedo focused counterparts. The Tier VII Akizuki at the top of the line mounts eight superb Japanese 100mm guns, sporting a high rate of fire and nimble turrets! Though these ships are suited for gunnery duels, they still carry a few powerful torpedoes for tricky situations.

Time is running out to finish the Yasen Butai Leader campaign, but there is still time left! The Tier VII Japanese large cruiser Azuma is waiting at the end, ready to engage in some long-range warfare. Designed to take the place of a Kongo-class battleship as leader of the Yasen Butai, or “Night Battle Force,” the Azuma mounts nine excellent 310mm guns and decent protection. Her powerful high-explosive shells and large health pool is perfect for battling it out at a distance. On December 7th, a short campaign begins: “Tokyo Express.” This event features Japanese destroyer commander Raizō Tanaka alongside the usual rewards, giving you a captain to pair with the new destroyers. Be sure to get Admiralty backing in order to get all of the campaign rewards!

Two powerful Legendary tier destroyers join the update—Shimakaze and Khabarovsk. Available through Bureau research, these ships are a long-term goal that is helped along by logging in daily and boosting them with your roster of commanders and ships. These ships are the pinnacle of their nation’s destroyer trees, with Shimakaze carrying fifteen powerful torpedoes and Khabarovsk featuring absurd speed and punchy 130mm guns.

The November update also came with some gameplay improvements, especially for Battleship secondary armaments. Every battleship will get an option to mount the new Enhanced Secondary Targeting consumable, which greatly improves the accuracy of the secondary armament for a short time—shredding smaller enemies within range.

Black Friday is just around the corner, and four new Black Fleet ships are set to arrive for the occasion: Mutsu B, Indianapolis B, Atago B, and Blyskawica B! This is the first reappearance of the Blyskawica in over a year, along with her unique commander Jerzy Świrski. These exclusive ships are only here for a short time, and the Atago B is only available in the new Black Friday containers as a rare item.

At Wargaming, we’re extremely thankful for our players and this month we’re thrilled to show you our appreciation with this incredible content and exclusive sales in both World of Tanks and World of Warships: Legends! We’ll see you on the battlefield and on the high seas! 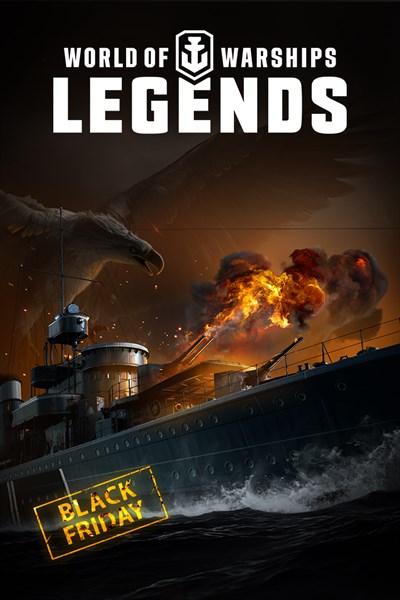 Related:
David Beckham is Back in FIFA 21
This Week on Xbox: November 20, 2020
The 2020 GT World Challenge Pack DLC Races to Assetto Corsa Competizione This Winter