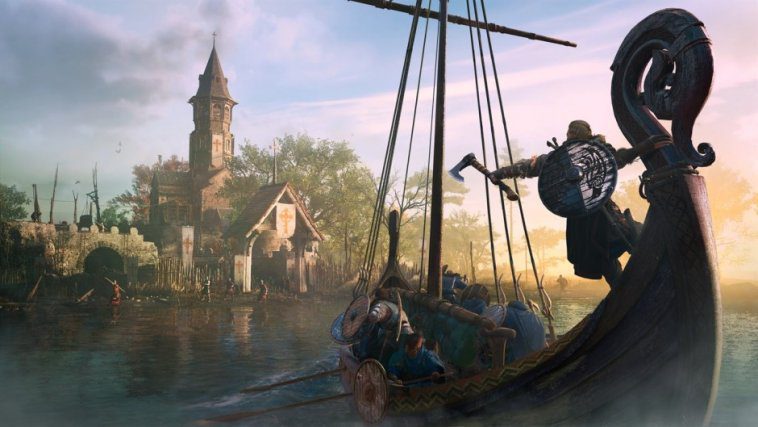 Welcome to Next Week on Xbox, where we cover all the new games coming soon to Xbox One, Xbox Series X|S, and Windows 10 PC as well as upcoming Xbox Game Pass for Console and PC titles and soon-to-be released ID@Xbox games! You can get more details on the games below and click their profiles for pre-order details where available (release dates are subject to change). Jump in!

In Assassin’s Creed Valhalla, become Eivor, a legendary Viking raider on a quest for glory. Explore a dynamic and beautiful open world set against the brutal backdrop of England’s Dark Ages. Raid your enemies, grow your settlement, and build your political power in the quest to earn a place among the gods in Valhalla.

A lightning-fast, fusion of the FPS and action genres, created by one-man development studio FYQD using Unreal Engine. Combine a wide variety of skills and abilities to unleash dazzling combo attacks. SRO (Supernatural Science Research Organization) agent Shelia’s adventure is about to begin. This game depicts the maiden adventure of Shelia in the year 2020.

A new power is born out of the ancient Pyramid Ship above Europa’s frozen frontier, and a dark empire has risen beneath. In Destiny 2: Beyond Light, join your fellow Guardians and bring down the empire at any cost – even if it means wielding the Darkness itself.

Enlisted is a squad-based first person MMO shooter covering key battles from World War II. The game carefully recreates weapons, military vehicles, and the atmosphere of that era, while demonstrating massive clashes of numerous soldiers, tanks, and aircraft with artillery and naval support.

Wield your Soulflame, unleash extraordinary powers, and dive into the touching story of two kindred spirits. Guide the child-like soul Ki on a journey through the beautiful and haunting afterlife in this unique 2D puzzle platformer.

The Falconeer is an open-world air combat game, featuring frenetic aerial dogfights and deep exploration of the mysterious open-world of The Great Ursee. Generations of poisonous decisions and treason swirl in the deep, as factions clash in a fight to preserve the past or flee its terrible consequences.

Build your deck, control the space, and use the environment to defeat your enemies. With an evolving roster of abilities, you must train new cards, upgrade existing ones, and find the perfect combinations to defeat your opponents and bring down criminal organizations across the world.

From the creators of Rock Band and Dance Central comes Fuser – a nonstop virtual music festival where you control the music. Combine elements of the world’s most popular songs to create your own sound or partner with friends on epic collaborations, then share your amazing mixes and headlining performances with the world.

Gears Tactics is the fast-paced, turn-based strategy game from one of the most-acclaimed video game franchises – Gears of War. Outnumbered and fighting for survival, recruit and command your squad to hunt down an evil mastermind who makes monsters.

Become a skilled drone racing pilot in Liftoff: Drone Racing! The game challenges you to start a fast paced from backyard to pro track drone racing pilot career, either solo or together with others in the online multiplayer mode.

The year is 2084. In a dark cyberpunk world shattered by plagues and wars, become a neural police detective and hack into the jagged minds of others. Make use of anything they felt, thought, or remembered to solve the case and catch the elusive killer. Observer: System Redux is the definitive vision of the award-winning cyberpunk thriller, rebuilt and augmented for the next generation.

Welcome to a new era in coaster park simulation! Bring your ideas to life with easy-to-use tools, manage all aspects of your expanding empire, and harness the world’s best creations from an endlessly creative community in the Frontier Workshop.

Are you ready for the world’s most extreme water slide adventure? Play with 20+ of the world’s biggest social media stars and blast into an adventure of a lifetime! Choose from favorite star, jump onto the ride of your choice and race head-first down some of the wildest water slides!

Tetris Effect: Connected is the original game with all-new co-op and competitive online and local multiplayer modes! This is Tetris like you’ve never seen it, or heard it, or felt it before — an incredibly addictive, unique, and breathtakingly gorgeous reinvention of one of the most popular puzzle games of all time.

XIII is a remake of the cult first-person action game that was initially released in 2003. You play as “XIII”, a man without an identity, in a solo campaign with numerous twists and turns. Inspired by the eponymous graphic novel, the game features a completely reinvented and unique cel-shading design.

Yakuza: Like a Dragon (Console and PC) – November 10 – Optimized for Xbox Series X|S

Become Ichiban Kasuga, a low-ranking yakuza grunt left on the brink of death by the man he trusted most. Take up your legendary bat and get ready to crack some underworld skulls in dynamic RPG combat set against the backdrop of modern-day Japan in Yakuza: Like a Dragon.

50 Years is a fast-paced alternative to the bigger, longer turn-based strategy games where you can win or lose a game in a single evening.

Smarter than regular sokoban! Explore abilities of your drones to place crates on their places. And it isn’t so easy as you think. Step by step learn the rules of dark cybernetic world to solve 100+ unique challenges!

Begin the emotional journey and start as a small spark of life. Move out of the depths into the bright and peaceful place of grown species. Immerse yourself in the atmospheric surroundings from the beginnings of life, and the beautiful soundtrack to complement your experience.

Take on the role of Vera Blanc, a young woman with an extraordinary power: the ability to read other people’s minds! Gameplay is like that of a visual novel, adventure game with two endings for the mystery and a collection of challenging minigames.

In a world now dominated by zombies, you are a survivor scavenging for resources. Travelling across huge open-world maps, facing hostile surroundings, and surviving a zombie outbreak, all of which you could take on with up to 23 friends or other players. Form alliances or fight against other players. Your final goal is to remain among the living, to stay unturned.

Beat Me! is a physics-based multiplayer game for up to 6 players. Play with comical fantasy characters in a wide variety of fun and surprising environments. Challenge your friends locally or beat others over the internet!

Bouncy Bob 2 is a party game where you bounce, shoot, and fight your opponents in various games modes.

The iconic Black Ops series is back with Call of Duty: Black Ops Cold War – the direct sequel to the original and fan-favorite Call of Duty: Black Ops. Come face-to-face with historical figures and hard truths, as you battle around the globe through iconic locales like East Berlin, Vietnam, Turkey, Soviet KGB headquarters, and more in the early 1980s.

Inkland is a hand-drawn unusual world. Reveal the secret of the Mysterious Tower in this old-school role-playing game with a first-person perspective, real-time combat, and grid-based movement.

Exit the Gungeon is a small, arcade-style, spin-off ‘dungeon climber’ that immediately follows the adventures of the misfit Gungeoneers attempting to survive a series of increasingly dangerous elevators and countless waves of enemies.

Experience the music of Kingdom Hearts like never before! Melody of Memory features 20+ characters, 140+ music tracks, and online VS multiplayer mode. Play as familiar faces from the Kingdom Hearts series, including Disney guest characters who will appear to lend you a hand as you explore the music and memories from the classic series!

Gear up for thrilling snow sports, relax in natural hot springs, and design your Japanese-inspired home in The Sims 4 Snowy Escape Expansion Pack! Discover new ways to adventure—from sledding and snowboarding to hot pot and hikes, there’s something to match every lifestyle. Preorder now to plan your escape! Requires The Sims 4 and all game updates to play.

Related:
This Week on Xbox: November 6, 2020
Reignite the Chase in Need for Speed Hot Pursuit Remastered, Available Now on Xbox One
Meet Luke Preece – The Man Behind the New Gears Tactics Poster