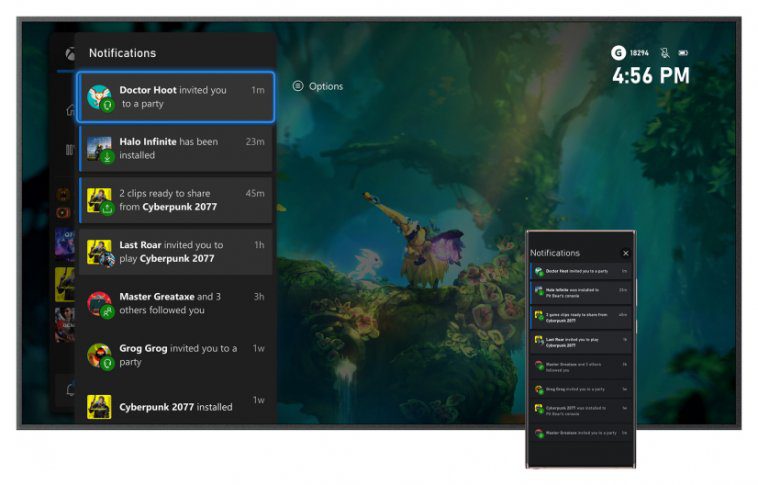 Last month Chris Novak, Head of Xbox Research and Design, shared our vision of a unified Xbox experience across devices that puts gamers at the center, enabling them to stay connected to their games, friends and communities, which will come to fruition with the release of Xbox Series X|S this November. As part of this vision, the Xbox team has been hard at work continuing to iterate on new experiences based on your feedback. Today, we’re excited to share another update laddering up to our vision of delivering you a unified Xbox experience – an all new Xbox app (Beta) on mobile is now available on Android phones and tablets.

The new Xbox app (Beta) has been rewritten from the ground up making it easier for all gamers to stay connected to your friends, games and fun at home or on the go, no matter what device they prefer to play on. Your friends and parties can stay with you via voice and text chat, even if they’re on console or PC. A new, unified notification inbox means you will now receive and be able to clear your notifications for new party invites, messages, and more right on your phone.  The new share feature makes it easier to share game clips and screenshots from your console to your favorite gaming and social networks. Lastly, we’re unlocking Xbox remote play, formally known as Xbox Console Streaming (Preview) for all gamers in the new Xbox app (Beta)—you no longer need to be an Xbox Insider to play games installed to your console on your phone. The free Xbox app (beta) is available for you to check out today and keeps in you the game—wherever you like to play.

With the new Xbox app (Beta), you can receive notifications for parties, chats, new friends and followers, captures that are ready to share, and more.  Once you clear your notifications on any device, your Xbox notifications will be updated across your Xbox accounts, no matter where you play next.

Xbox Party & Chat on the go

With the new Xbox app (Beta), your gaming friends are just a tap away while at home or on-the-go. Use the onscreen keyboard from your phone or tablet to send a quick message, or you can setup or join an Xbox party on your phone.  Party up with your friends, no matter which device they have. Chat with friends on Xbox Series X|S at launch this November, or on Xbox One, and Windows 10 PCs.  Built-in voice chat couldn’t be easier when using your favorite Bluetooth headset that you’ve already paired with your phone. With the new Xbox app (Beta), it’s easier to stay connected to your friends no matter where you are.

Not only does the new Xbox Wireless Controller have a share button built in so you can capture your best gaming moment with the press of a button, we’ve also built a new sharing experience to make it easier than ever to share your game clips and screenshots with friends from your mobile phone.

Use the Xbox Wireless Controller to capture your best gaming moments.  Press once for a screenshot, hold to record a game clip, or double tap to open your capture library.  With the Xbox Accessories app on console, you have the option to swap how the Share button maps to capturing screen shot, game clips, and opening the media library.  Then, share via your console, or with the new Xbox app (Beta).

The Xbox app (Beta) will let you know when you capture is done uploading and ready to share, and your favorite gaming moments will automatically be compiled in a library with the option to save directly to your phone. Use the new Xbox app (beta) to share quickly and easily.  The new Xbox app (beta) is already setup for sharing to popular social media networks like Instagram, WhatsApp, Snapchat and more.  It also gives the option to share directly with one or a small group of friends via messages.

Showcase your best gaming moments and awesome screenshots directly on your Profile. Game clips and screenshots shared to the Xbox community will be showcased in the new Highlights section designed for a mobile-first experience.

Check out what your friends are playing through their profile by sending a message or inviting to a party. Profiles are where you showcase your Xbox identity and allows you to quickly engage with anyone.

Stay connected to your console

This holiday, the console experience starts with the new Xbox app (Beta). You’ll use the Xbox app to get your new Xbox Series X or Series S set up for the first time. Use the mobile app to log in and select your settings while your console updates.  Using your phone to setup your console and account will save valuable time and get you ready to play faster than ever before. Once you’re set up, use the app to install any game to your console, manage your game library to free up space, or as a remote control.

If you love playing games, the new Xbox app (beta) is more useful than ever. We’re replacing the Console Streaming (Preview) with Xbox remote play in the new Xbox app (Beta).  We’ve removed the requirement of being an Xbox Insider so starting today all Xbox gamers can play games downloaded to their consoles straight to their phones or tablets.  With Xbox remote play, you can connect to your console and have access to Xbox One games already downloaded to your console including Xbox Game Pass titles.

In addition to remote play, changes to how you login go live for everyone today. You are now able to sign in on as many Xbox consoles or Xbox Apps as you want, all at the same time. Now you can use your Xbox console as much as you want for watching movies, using apps, chatting with friends, and more. When it comes to games, you’ll be able to play on one device at a time so all your progress, achievements, and saves stay up to date and synced whichever device you choose to play on. Access to your library has never been easier.

The new Xbox app (Beta) makes searching for games and people easier than ever. Search results have been unified in one easy-to-find location, making the app the go-to place to find what you’re looking for on Xbox. Quickly type a game title or gamertag and see search results in real time – plus, search for ‘Set up a console’ to easily start the setup process for your new console.

The new Xbox app (beta) is coming to all Xbox supported markets, and gamers are invited to download and check it out beginning today. You can download the app from the Google Play Store. Please send us your feedback and let us know what you think.

Related:
This Week on Xbox: September 18, 2020
Ascend into Neverwinter’s Newest Update, The Redeemed Citadel
8 Tips You Should Know Before Jumping into Necromunda: Underhive Wars