Mulan, the Ascendant Warrior, becomes immortal in the new Smite update, available now on Xbox One! Marking a first for Smite, Mulan is not a Goddess, or even a mythical figure like Arthur or Merlin – she is our first playable character based in history, inspired by a real historical figure who has been deified to an immortal within the Smite story.

Hua Mulan is a well known legendary figure who heroically took her father’s place in the army of China. Disguising herself as a man, she worked relentlessly to rise through the ranks, maintaining this pretense for 12 years. She fought well against the enemies of China, attaining rank and the loyalty of her fellow soldiers by fearlessly leading them into the thickest frays of battle. At the end of twelve years of service, she was offered a high rank, but turned it down in favor of returning home to her family.

Her duty complete, Mulan returned home to live out her days with the family whose land and lives she protected so valiantly in the army. But that was not the end of the end of her story… or her fight. For now, a new danger threatens her land, and Hua Mulan must once more take up her weapons in defense of her home.

Mulan’s inherent skill as a fighter was honed with over a decade of intense training and battlefield experience. Not content to master a single weapon in her army’s arsenal, she would go on to perfect her skill with the sword, spear, and longbow. In Smite, Mulan wields all three of these weapons in combat to deadly effect, allowing her to strike her enemies at multiple ranges. Each match with Mulan will effectively retrace her journey to becoming a legend, as using her weapons will allow her to Master them, unlocking improved stats and additional effects for her weapons in the process. All of these weapons combine in her appropriately named Divine Mastery ultimate ability, wherein she uses all three weapons in quick succession to deal truly devastating damage to her opponents!

As always, there’s a ton more great content in this new update like the new Iron Conqueror Hera skin in the Jade Corruption Event, and the community requested Dunk-Father Odin skin in the all-new esports and Live Hub. You can even get Dunk-Father Odin for free, just by watching Smite Pro League matches and picking the winners with our new in-game match voting!

Thanks for checking out what’s new in our
Ascendant Warrior Update and we hope that you love Mulan as much as we
do! 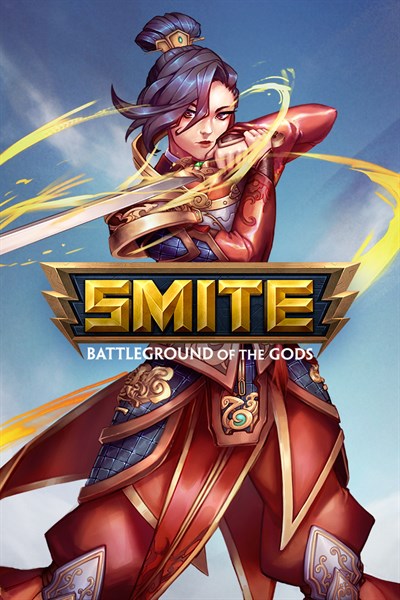 ☆☆☆☆☆ 1310
★★★★★
Get it now
Xbox One X Enhanced
Enter the Battleground of the Gods Join 35+ million players in SMITE, the world’s most popular action multiplayer online battle arena. Become a legend of myth, enter the Battleground of the Gods, and play FREE now! 100+ Gods Unleash each deity’s unique strategies, legendary weapons, and earth-shattering powers. Rain lightning down upon your foes as Zeus, assassinate from the shadows as Loki, or transform and trick your foes as the Monkey King, Sun Wukong. Which God will you choose? Unique Perspective Unlike other MOBAs, SMITE puts you directly onto the battlefield with a third-person action viewpoint. From blind-side ambushes to aimed shots, a new pantheon of strategic possibilities awaits. Become Godlike Never played a battle arena before? Don’t worry. Auto-buy, auto-level, and the deathmatch-like Arena mode let you jump right into divine MOBA action. Aspiring pro? Top the ladders, join a competitive team, and you too could be playing at the SMITE World Championship.