New Modes of Survival in Remnant: From the Ashes | Blogdot.tv

The Remnant: From the Ashes – Swamps of Corsus DLC introduces a brand-new way to play Remnant: From the Ashes – Survival Mode! The goal is simple; how long can you survive in one life? Survival Mode streamlines progression and puts the emphasis on player skill, build creativity, and smart decision-making. Knowledge of Remnant’s brutal bosses is a must, but balancing time and exploration are also critical for survival.

In Survival Mode, players start with nothing but a Repeater Pistol, a few consumables, and a handful of scrap. They are then thrust into a completely randomized and endless experience that only ends upon death.

In the main room of Remnant’s dimensional Labyrinth, is a corrupted World Stone that will seem familiar – but now shines with an eerie glow. Players will also see several obelisk vendors, which sell random items to help them on their journey. Players can choose to spend their starting scrap to purchase any available gear or consumables – or save it for the next time they come across the vendor with the hopes that more desirable and impactful choices will become available.

Upon activating the Corrupted World Stone, players are whisked away to one of Remnant’s diverse worlds, at random. Players journey through the biome while searching for the entrance to the biome’s dungeon and then fight their way through that dungeon to battle the biome’s boss. Along the way, they gain EXP from kills to increase their player level, which automatically increases their damage, health, and stamina. Players must explore for resources, loot (guns, armor, trinkets, mods), and even stackable modifiers (Survivor Traits) which alter many gameplay elements and can stack to impressive levels.

However, this journey is not as simple as it sounds. Along the way, players will be fighting against the clock… a clock which gradually increases the difficulty… a clock which cannot be stopped. The longer players take to explore and get stronger, the harder the game becomes. As they defeat bosses, the clock is advanced, and the game becomes harder still! It is a true test of time… a true test of survival!

After defeating a boss, players head back to the Labyrinth with more resources. They can visit the vendors to see what new wares are available. Wise players will try to find synergies between looted and purchased items to give them the greatest chance at surviving. Once the purchase phase is done, players again travel through the corrupted World Stone to face another random biome. 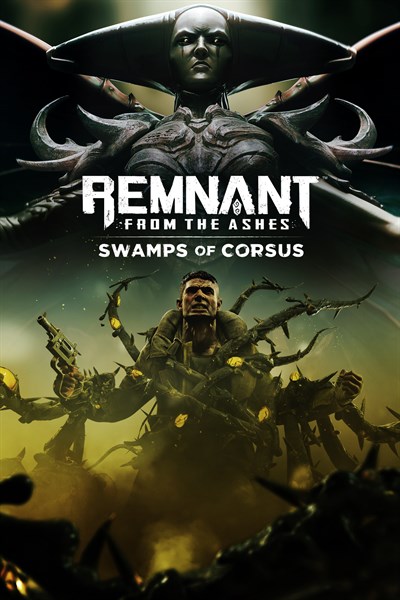 ☆☆☆☆☆ 18
★★★★★
$9.99
Get it now
Remnant: From the Ashes – Swamps of Corsus requires ownership of Remnant: From the Ashes to play. Begin your journey across the dangerous and corrupted worlds of Remnant: From the Ashes with a new mode and expanded map content in Swamps of Corsus. New Mode – Survival: Fight for your life in this new rogue-like game mode! Start off your adventure with nothing but a pistol, some scrap and the skin on your back. Travel randomly through corrupted World Stones to different biomes, scrap-up gear, fight insanely-difficult bosses and test your endurance on how long you can resist The Root’s influence. The Iskal Rise – The swamps of Corsus swarm with new content! Discover a new zone in Adventure Mode, fight new bosses, experience new stories, participate in new events, find new quests, and more. Lock & Load – Pick up new items, new armor and skins, new weapons, new mods and new traits. Armor Skins – By defeating bosses in Survival Mode, or the Hard and Nightmare difficulties in Campaign and Adventure Mode, earn Glowing Shards which you can use to purchase alternate armor skins for every piece of armor available in the game.

Related:
Find Out What’s New in June for Xbox Insiders
The Elder Scrolls Online: Greymoor Now Live on Xbox One
Destiny 2 Season of Arrivals: Looking to the Sky