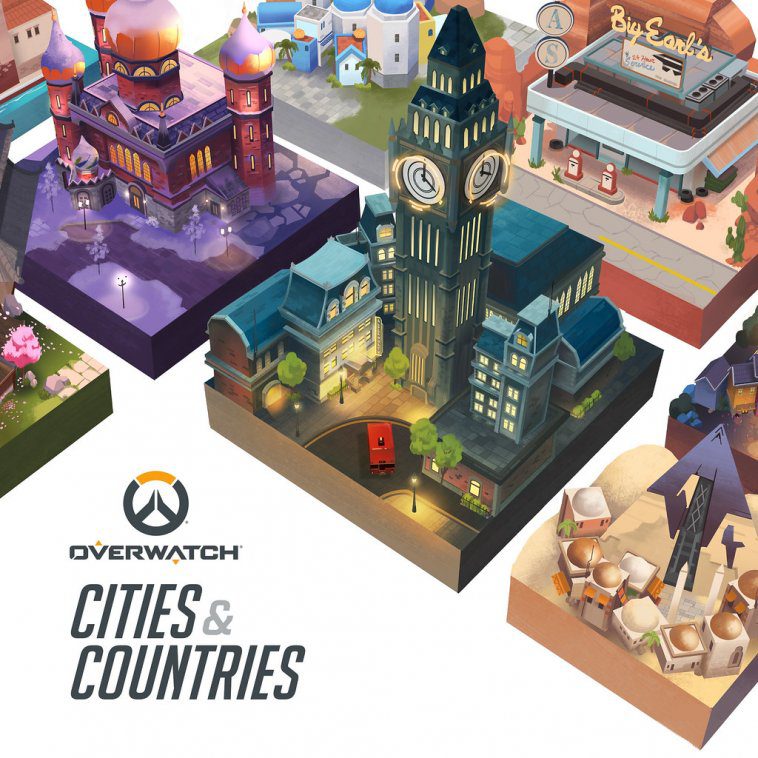 What is that melody? A new album of Overwatch music is live today, available now on Spotify, iTunes, Apple Music and Deezer. Entitled Overwatch: Cities & Countries, the collection of music features the regional themes of Overwatch maps and missions across the world.

In addition to the new album release, starting tomorrow until July 27, players will be able to earn limited-time rewards during the Sigma Maestro Challenge including the legendary Maestro Sigma skin in Overwatch.

In honor of the album release, we caught up with the composer team – Adam Burgess (Blizzard Composer) and Derek Duke (Blizzard Music Director), to talk about how this new musical project came to be.

Tell us about your respective musical backgrounds.

Adam Burgess: I have always had my feet in both the classical and contemporary worlds, and music was always very collaborative for me. I grew up playing in bands, and learning a lot of contemporary music, but at the same time, I was studying classical guitar, and teaching myself recording techniques and technology on my parents’ computer when it was available. Instrumental — especially orchestral — music always seemed scary, isolating and intimidating, and although I tried endlessly, I couldn’t write a good song to save my life. It wasn’t until my 20’s that I started to become serious about creating my own instrumental music, which I ended up loving to do more than anything I had tried before. I guess you can say that I failed my way into one of the best things that happened to me.

Derek Duke: I went through piano and theory lessons at an early age, then other instruments while growing up like guitar, trumpet, euphonium and some others though not too deeply.  I also studied dance for several years, which I certainly wouldn’t count out from being formative and related.  In high school I had the opportunity to student-conduct choir and was writing and arranging instrumental/orchestral music, while simultaneously pursuing early synthesizers. I was even experimenting with building my own, as well as dabbling in programming and computer control of them with the first-generation of home PCs.

During my education at CalArts, the opportunity to pursue world music alongside composition, while doubling my work, awoke a connection and keen interest in musics of the world, especially their vocal music traditions — enough so to warrant traveling to West Africa for recording/research and living in South India after my graduation to study music there more in depth.  By never favoring the most typical, standard or easy route and always looking for the new, interesting and adventurous path, it was always my hope, by those that have shared knowledge with me and all I’ve been exposed to that it’s helped to bring me a unique type of creativity.

What influences you when you compose music?

Derek Duke: Overwatch is constantly balancing the classic and iconic, while presenting a hopeful vision for the future. You see it in all aspects of the design, such as the artwork, the environment, and the different heroes and our stories. We really try to bring that mindset to the music. We get inspiration from all music, from classical to contemporary, experimental, and everything in between. It’s all music to us, and everything can be an influence. We will throw any two sounds together and see where things go. We don’t let boundaries of genre and instrumental tradition hinder us. That said, given OW’s setting among many real-world cities and countries, we pay attention to look for and use instruments with links to their regions in our musical explorations and creations.

How did you get started in gaming? Was there anything specific that led to it?

Adam Burgess: Gaming was mostly a social thing growing up. I have fond memories of visiting my friend’s houses and playing PC and console titles on weekends. It is still the thing that I love the most about games, a franchise like Overwatch, and the titles that Blizzard has created. I can’t say that there was a particular moment or title that made me want to pursue game music, it was more the intrigue of questions that I didn’t have answers to. Video games are often very interactive. They are not linear like film or television. I was always curious how the music changes depending on my actions as a player, what decisions I make, and where I take my character. Games have only gotten more intricate over time, and this creative decision making is something that continues to be an inspiration and driving force in my love for gaming, and game music.

Derek Duke: Serendipity.  At the particular time I got involved, early ‘90s, I was still involved in the academic world of composing. I was approached by a friend who I’d done an audio favor for back in college with a referral.  At that time, finding people that had knowledge of how to work with sound/music/audio in any interactive way or even in conjunction with a computer was pretty rare. It was really knowing how to deal with computers and audio file types etc. back then that got me in the door. Once I got that first job, the work just continued. For me though, it was a special kind of work. It fulfilled me in ways different from other “paying music gigs,” the interactivity possibilities, participating in game design and function, size etc. and working together with people on a project that to make something greater than the sum of its parts.

Then at one point I chanced upon the opportunity and won a very special gig, writing some music for a game called StarCraft from Blizzard Entertainment. Now I’m coming up on 20 years working on the most amazing video game franchises in the world.

What was your process when creating this album? Can you explain how you took one particular track from beginning to end?

Derek Duke: The album has slowly evolved over the past five years as more locations were added to the Overwatch universe and we now have the opportunity to share it with the community. We have always known that we wanted to give more of our music to the fans, and we thought that it was a strong concept to present all our location music as a cohesive soundtrack. The presented tracks are all extended versions of our in-game music, many times small suites are composed to create a bit more material for other related use, so there is a lot of new music for fans to experience on the album.

Derek Duke: One unique piece was Blizzard World, which lent itself to some cross-franchise music that we hadn’t had the opportunity to do before. It was also unique in that it is a totally fictional location (although one that we all wish existed). The second half of the piece combines numerous different classic themes from World of Warcraft into one short segment, where the themes layer on top of each other in interesting ways. If you listen closely and pick apart the different layers, you’ll hear calls to the World of Warcraft Main Title, A Call to Arms, Illidan, and Stormwind. But when you listen to it as a whole, it very much sounds like Overwatch. It’s like an easter egg for Blizzard fans. Once we recorded the orchestra and choir, it all came together in a way that we were really excited about.

How do you compose and produce tracks that reflect the uniqueness of the locations?

Derek Duke: Each location is different, and inspiration calls to you in different ways. We are influenced by so many things from the environmental artwork, to world history, traditional instruments, and modern pop culture. If we told you that a huge part of the Hollywood track was influenced by Taylor Swift and Nine Inch Nails, you probably wouldn’t believe us. You would likely never hear it, but it’s true. Sometimes an idea that can seem bizarre on the surface can send you down the right path if you are willing to chase it. The key for us is to have an open mind, and to be willing to experiment.

How do you approach blending the futuristic, fast-paced vibe of Overwatch with the vibes of culturally rich locations around the world?

Adam Burgess and Derek Duke: Everything we do, we try to present through the lens of what we think this would sound like in the Overwatch universe. We have a philosophy that our location music needs to sound like the Overwatch franchise before anything else. Overwatch is future-possible, uplifting and positive. Our location music is typically energetic, and functions in a way to load you into a match with energy and anticipation. You should feel excited to play by the moment you are selecting your hero. The key is injecting enough traditional flavor to make it interesting and unique, but the core goal remains that it should sound like Overwatch at the end of the day.

Do you have a favorite track from the album?

Derek Duke: These tracks are like memories for us, in that they’re attached to so many different moments, from different launches, to different BlizzCons. It’s hard to choose a favorite, and it’s honestly like a trip down memory lane to listen to this soundtrack. We hope that Overwatch fans will feel the same way.

Is there anything else you would like to add?

Derek Duke: It takes so many people involved in so many ways and on so many levels to help us bring the music for Overwatch to life; from other composers, the game team, our amazing producers, and sound designers, artists, game designers and creative leads, as well as our families, friends and others that support us in our daily lives. We all hope that you enjoy Overwatch: Cities & Countries as much as we have creating it. 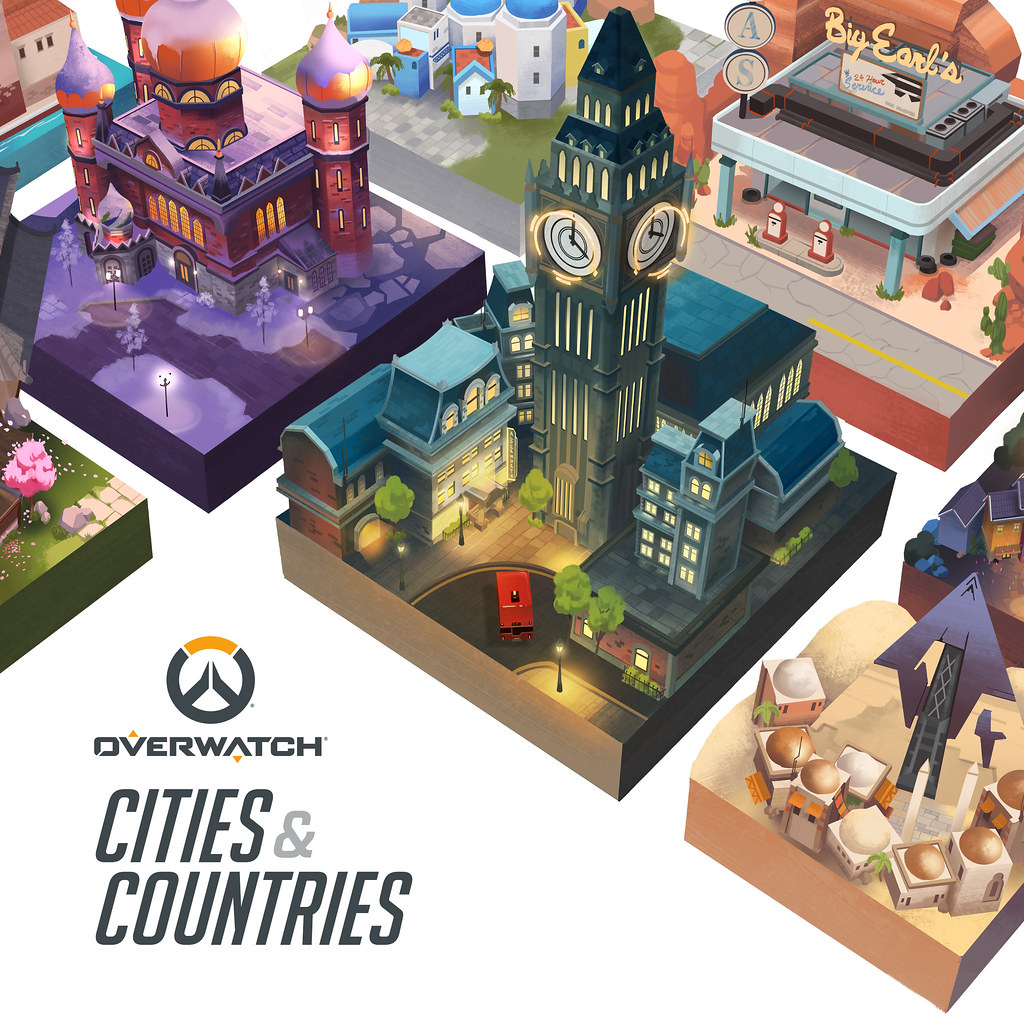