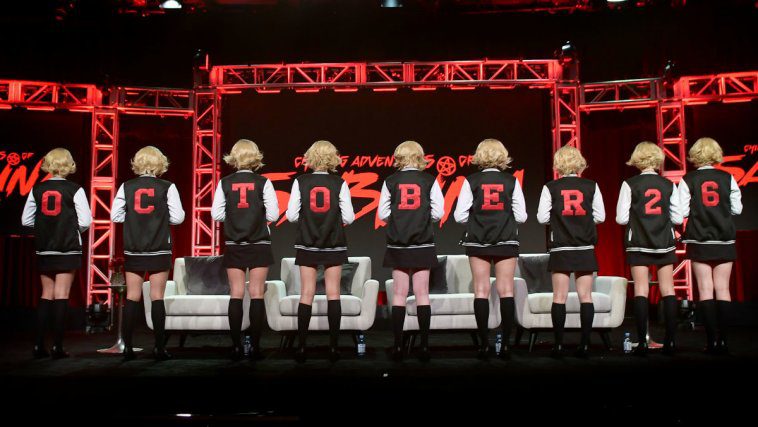 At long last, a premiere date has been revealed for The Chilling Adventures of Sabrina, the Riverdale sister series coming to Netflix. As revealed at the TCA press tour, the first season of Sabrina will bow on October 26, just in time for Halloween. The streaming service previously ordered two seasons.

The news was delivered by an army of blonde witches, handing out bloody red candied apples and chanting, „Something wicked this way comes,“ as the lights went out. Then the lights came back, the witches spun around, revealing the release date printed out on the backs of their high school varsity jackets.

Sadly, no footage of the series was shown during the surprise presentation. Given that the show will arrive in just a few months, though, that will likely change soon.

According to an official synopsis of Chilling Adventures, the series „imagines the origin and adventures of Sabrina the Teenage Witch as a dark coming-of-age story that traffics in horror, the occult and, of course, witchcraft. Tonally in the vein of Rosemary’s Baby and The Exorcist, this adaptation finds Sabrina wrestling to reconcile her dual nature–half-witch, half-mortal–while standing against the evil forces that threaten her, her family and the daylight world humans inhabit.“

The series comes from Riverdale showrunner Roberto Aguirre-Sacasa and stars Kiernan Shipka, Miranda Otto, Lucy Davis, Ross Lynch, and Michelle Gomez, among many others. While it’s expected to be set in the same universe, a crossover may not be so easy. While both shows hail from Warner Bros. TV, Riverdale and Sabrina are airing on different networks.

Of course, it’s always possible that somewhere down the line they can cross each other’s paths. In the meantime, get ready for the arrival of Sabrina Spellman and her bewitching friends on October 26.