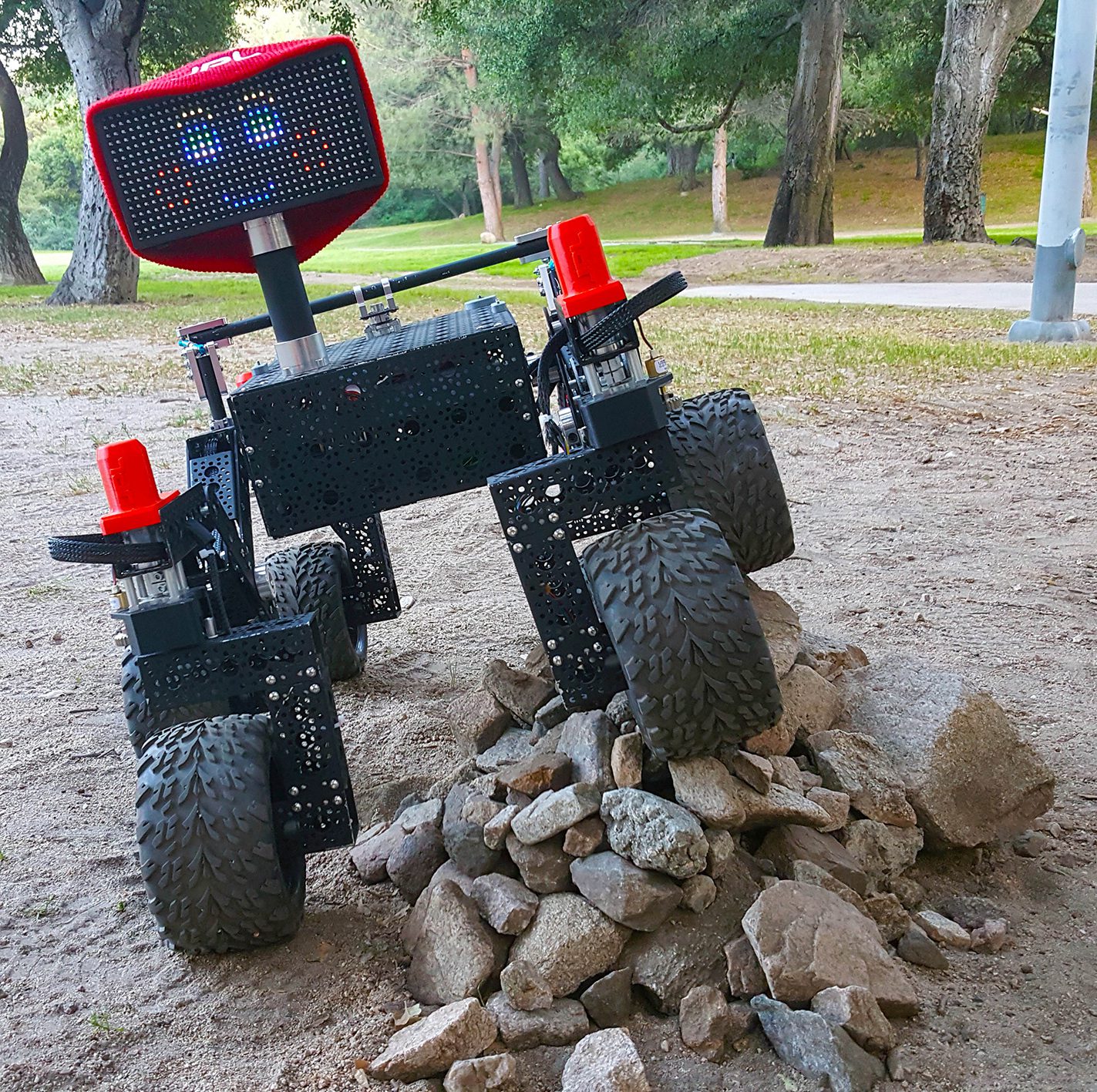 In the summer of 2018, engineers at NASA’s Jet Propulsion Laboratory built a mini planetary rover with the aim of letting students, hobbyists, and enthusiasts create one for themselves. It uses commercial off-the-shelf parts and has a Raspberry Pi as its brain. But despite costing about $5333 in total, the Open Source Rover Project has proven rather popular, including among people who actually work for the USA’s space agency.

One of those is Dr Jamie Molaro, a research scientist at the Planetary Science Institute. Her main focus is studying the surfaces of rocky and icy airless bodies such as comets, asteroids, and the moons orbiting Earth, Jupiter, and Saturn. So when she decided to create her mini-rover – which she dubbed PARSLEE, or Planetary Analog Remote Sensor and ‘Lil Electronic Explorer – she also sought to shake things up a little.

Constructing the robot itself was, she says, rather straightforward: the instructions were detailed and she was able to draw upon the help of others in a forum. Jamie also built the robot with her husband, a software engineer at Adobe. “My interest in the Open Source Rover Project was driven by my scientific background, but not my ability to build it”, she tells us, of what is essentially a miniature version of the Curiosity rover trundling over the surface of Mars. 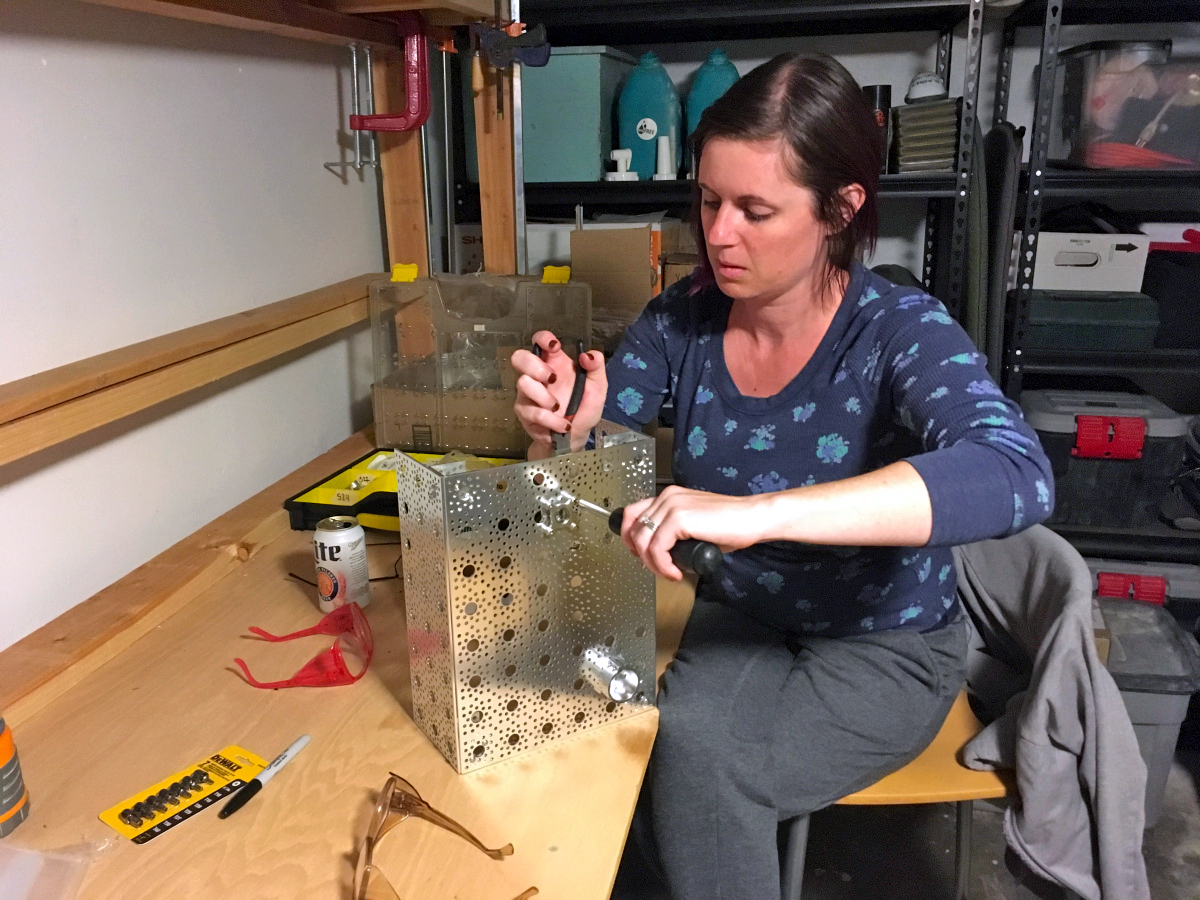 After building the rover wheel assembly, Jamie worked on the head assembly and then the main body itself

Jamie’s interest in science led to her considering the rover’s potential payload before the couple had even finished building it. She added a GoPro camera and a Kestrel 833, which measures temperature, pressure, elevation, wind speed, and humidity. In addition, she opted to use a Raspberry Shake seismometer – a device costing a few hundred dollars which comprises a device sensor, circuit board, and digitiser – with a Raspberry Pi board and a preprogrammed microSD card. 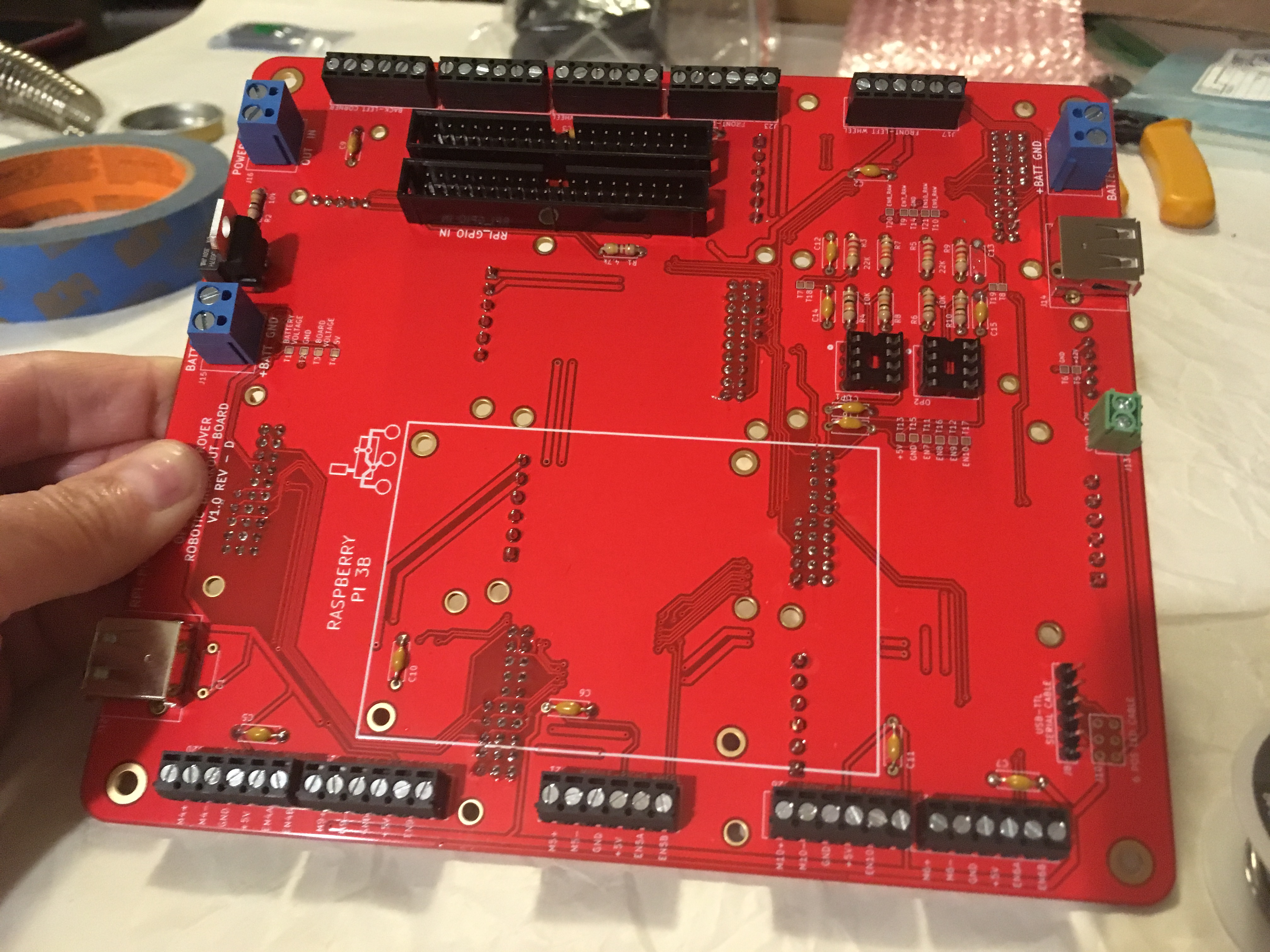 With the electronics assembly complete, Jamie and her husband could get on with integrating PARSLEE’s parts

The sensor records activity, converts the analogue signals to digital, and allows the recorded data to be read on Raspberry Shake servers. Jamie hopes to use PARSLEE to study the kinds of processes active at the surface of other planets. A seismometer helps us understand our physical environment in a very different way than images from a camera, she says.

To that end, with funding, Jamie would like to heat and cool boulders and soils in the lab and in the field and analyse their seismic signature. Thermally driven shallow moonquakes were recorded by instruments used by the Apollo astronauts, she says. “We believe these quakes may reflect signals from a thermal fracturing process that breaks down lunar boulders, or from the boulders and surrounding soil shifting and settling as it changes temperature throughout the day. We can do experiments on Earth that mimic this process and use what we learn to help us understand the lunar seismic data.” 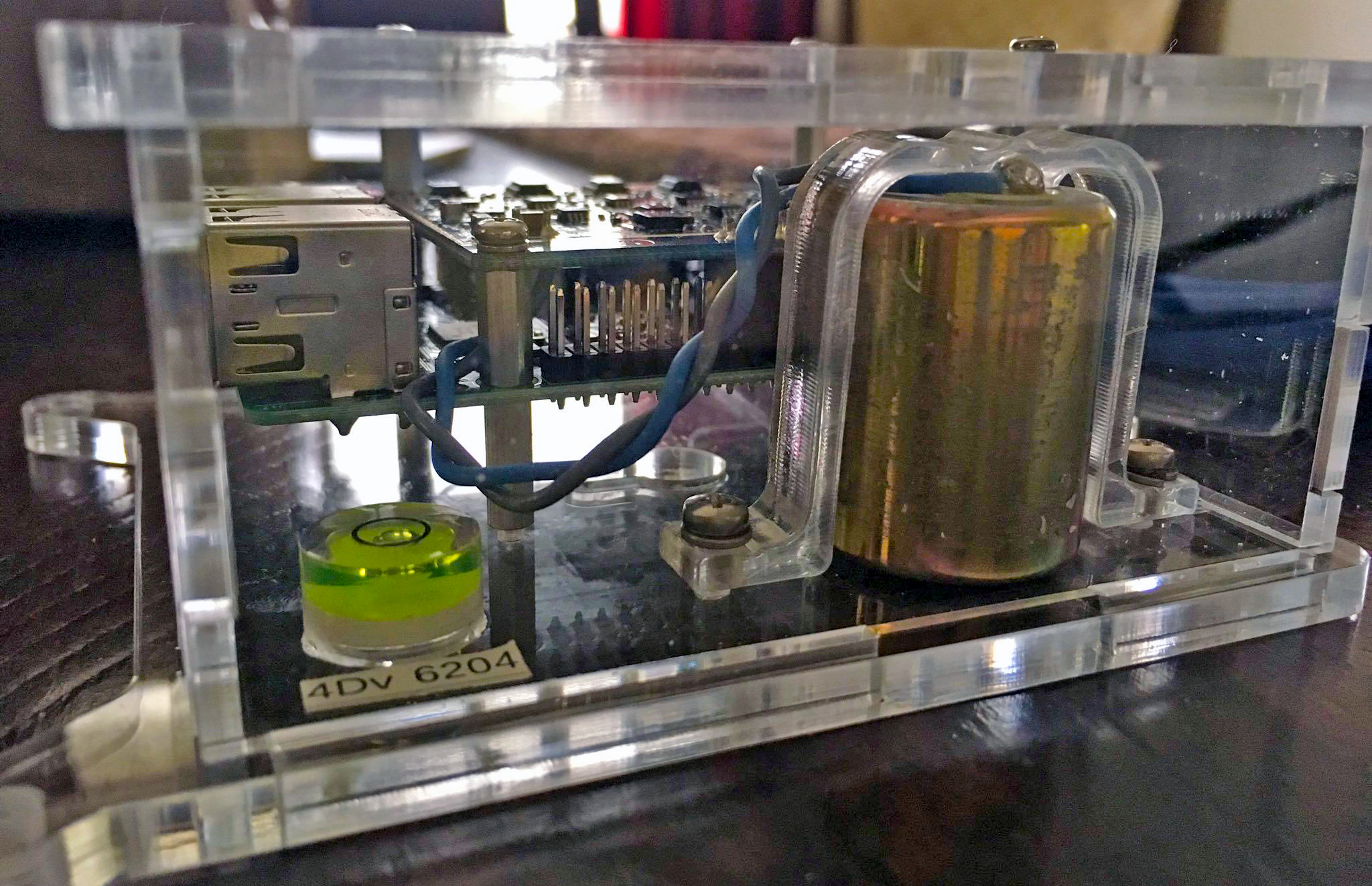 A Raspberry Pi processes the data recorded from the sensor and powers the whole device, with the whole unit forming a payload on PARSLEE

Jamie is also toying with optimum locations for the Shake-fitted rover. The best planetary analogue environments are usually deserts, due to the lack of moisture and low vegetation, she reveals. Places like dry lake beds, lava flows, and sand dunes all provide good challenges in terms of testing the rover’s ability to manoeuvre and collect data, as well as to try out technology being developed with and for it. One thing’s for sure, it is set to travel and potentially make a scientific breakthrough: anyone can use the rover for DIY science experiments.

This article is from the brand-new issue of The MagPi, the official Raspberry Pi magazine. Buy it from all good newsagents, subscribe to pay less per issue and support our work, or download the free PDF to give it a try first. 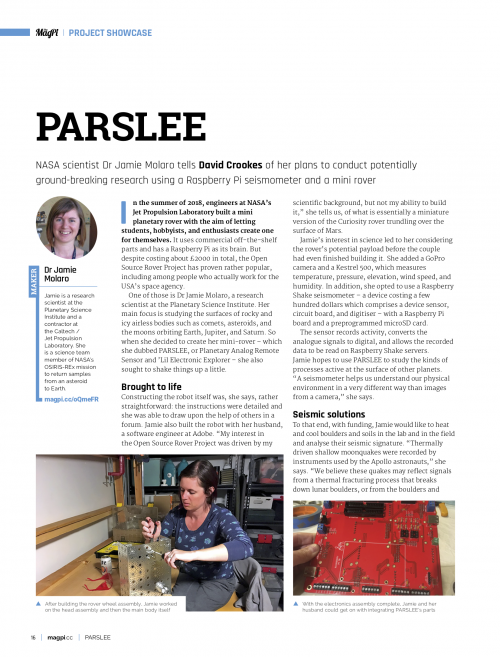 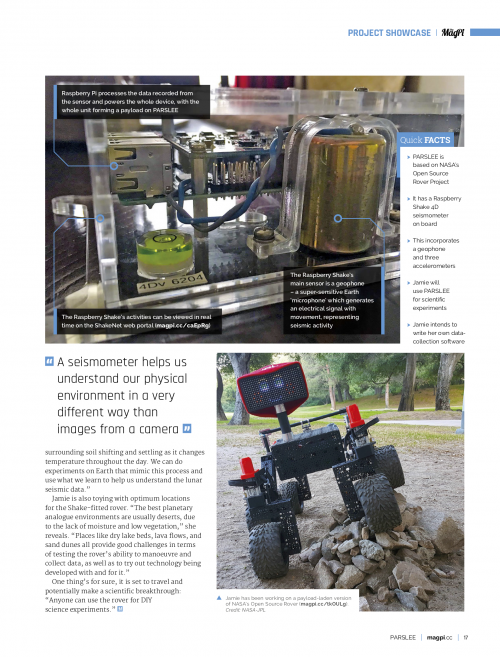