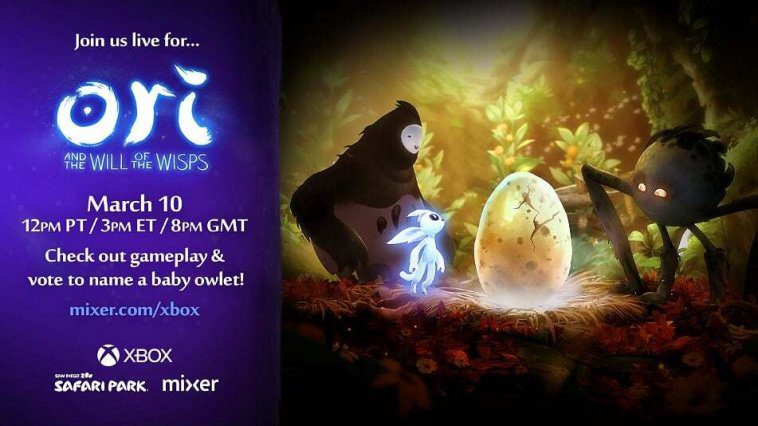 Xbox and the San Diego Zoo Safari Park are teaming up to ring in something magical that we’re pretty excited by. To celebrate the worldwide launch of Ori and the Will of the Wisps on March 11, on Xbox One, Windows 10 PC and with Xbox Game Pass, we’re bringing you a special livestream event. Maybe the most exciting part is that you, and the entire community, can help pick the name of one of the Safari Park’s soon-to-hatch, burrowing owls. Tune in on Tuesday, March 10 at 12:00 p.m. PT for the 2-hour live show on mixer.com/xbox, broadcast from the world-famous San Diego Zoo Safari Park in California.

In Ori and the Will of the Wisps, the little spirit Ori embraces and welcomes Ku, a young owl who is born into Ori’s adoptive family, and now you can help us name the San Diego Zoo Safari Park’s next owlet during the live show. Then, you can watch with anticipation in the coming weeks as hatching day approaches through the exclusive Mixer Burrowing Owl Cam pop-up channel. Our friends at the Safari Park have helped us narrow down the list of potential names to Ku, Kuro, Shriek and Ori, inspired by Ori’s magical world. But you don’t have to wait until the special event to begin voting! Go to twitter.com/xbox to vote for your favorite name today.

Packed with special
guests – like Mixer star Ewok, who will show us the ropes as she plays the Ori
and the Will of the Wisps live inside the Park – Wildlife Care Specialist talks,
gameplay, giveaways and the San Diego Zoo Safari Park’s very own burrowing owls
with their soon-to-hatch egg, this is a special event you won’t want to miss! During
the live show, you can also engage with Ori and the Will of the Wisps
and the Safari Park’s burrowing owls with exclusive stickers, follow emotes and
SFX buttons based on the new Ori soundtrack and real-life burrowing owl sounds.

Players around the globe can pre-order Ori and the Will of the Wisps for Xbox One and Windows 10 PC ahead of the game’s worldwide release on Wednesday, March 11. The game will also be available with Xbox Game Pass on day one of its global launch. In the meantime, you can play Ori and the Blind Forest and over 100 high-quality console and PC games with Xbox Game Pass Ultimate today. Stay tuned to Xbox Wire for the latest updates on the game!