Meet the Creator of Project Warlock — A Tribute to Fast-Paced 90s Shooters | Blogdot.tv

Hi, my name is Jakub Cisło and I started working on Project Warlock when I was still in high school. Today, four years later, I would like to invite you to take a look at the journey of how my passion project became a real game — from an idea seeded in my mind by my dad, to a fast-paced, gory shooter debuting on PS4 on June 9.

Every FPS fan knows the joy of landing a well-placed shotgun shell in the guts of a demon frantically reaching its claws at you, or the excitement of finding a secret area full of gold and much-needed ammo. Project Warlock is all about recreating that feeling.

The passion for annihilating pixelated monsters found its way into my head no doubt thanks to my dad — a true-school gamer through and through. When I was a kid, he showed me such cult-classics as Doom, Hexen, Blood or Heretic, and ever since then they couldn’t leave me alone.

Those action-packed mazes filled with enemies and flying bullets sowed the seed that many years later would sprout into Project Warlock — a love letter to the golden age of fast-paced shooters.

With an unconditional love for pixelated mayhem seated deep in my heart, I started working on Project Warlock while still in high school. Back in 2016 the game was just shaping up, under the name Exitium 3D, which later turned into Cataclysm 3D, and much later given its final title.

Working from scratch, with very little experience and 17 years old at the time, I had to learn almost everything as I went, picking up knowledge and tips on the way. Having in mind a well-defined idea of how these games should feel, I went through a long process of fine-tuning in the early stages of development, to recreate the gory and bloody action of my muses.

Slowly, but surely, it was starting to resemble the shooters we all know like Duke Nukem 3D and Doom. 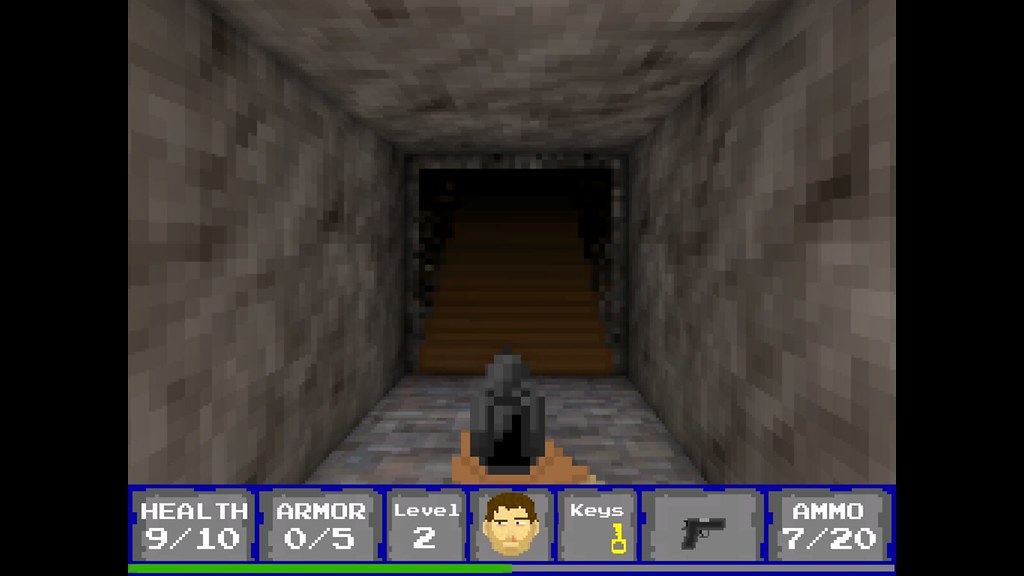 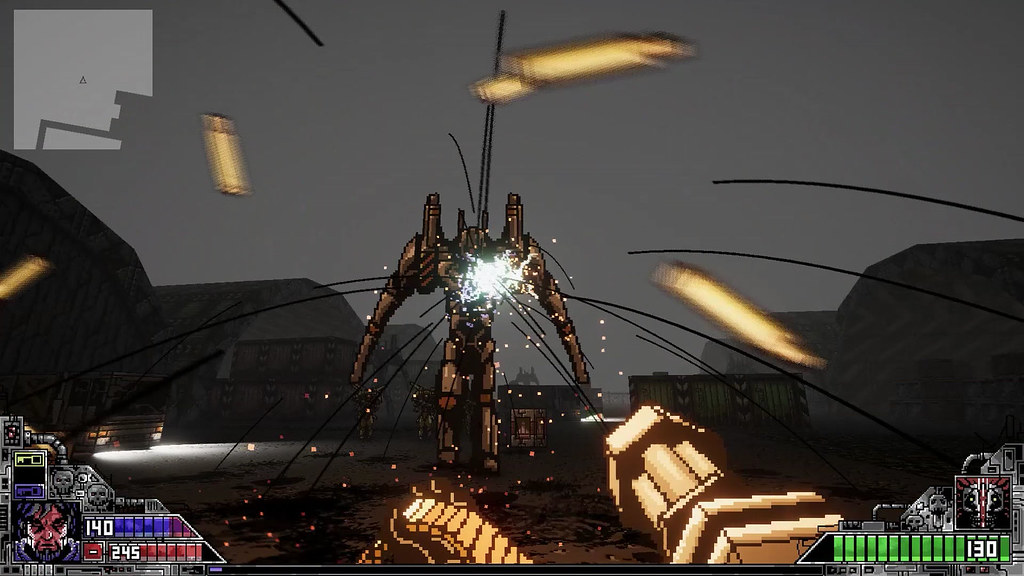 As you can see, it was a long way from the original concept to how the game looks now.

I knew very early how I wanted the game to look and feel, but I lacked the experience and tools required to bring it to life in its full glory. I had a vision in mind and I knew I had to take every opportunity to make it happen, so I decided that this should no longer be a hobby side-project.

In August 2016 I started a Kickstarter campaign to fund the tools I needed. The goal was set at an ambitious 90 Euro, but seemed real. As it turned out, the community’s interest in the game surpassed even those wild estimates and the project ended up with 227% of the initial goal.

Now that I was armed with the mind-boggling amount of 205 Euros, the sky was the limit.

Few months after the successful campaign, the project was shaping up nicely. The retro shooters’ trademark run’n’gun mechanics were in place and slaughtering succubi in haunted crypts felt very good. It was the right look that was missing.

I invited a few talented guys to help bring Project Warlock to life. Dawid Korzekwa arrived first and quickly started applying visual touches to the game, helping greatly in creating the art style that you can see today. Later, Iain Lockhart was brought on as a designer to map out the levels and Damian Bajowski was tasked with assembling all the pixels into arts of monsters and interiors of Project Warlock.

Our goal was simple, but very tricky to achieve – we had to combine the modern intuitivity and flow of levels with all the classic ideas of hidden areas, intertwining mazes and secret treasure chests. 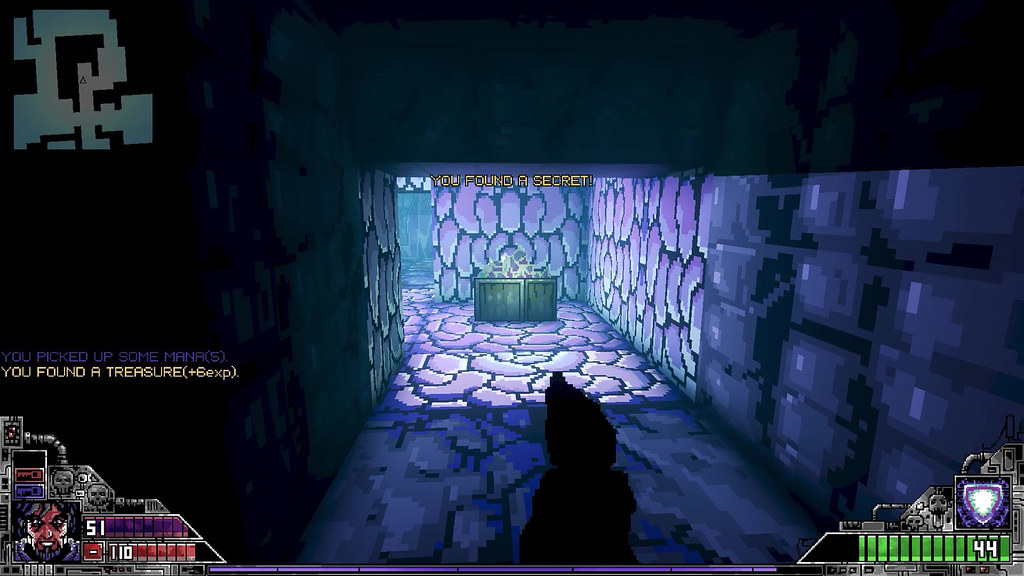 Creating levels packed with hidden ammo stashes, levers, secret elevators and key-locked doors was no small feat. I reckon that the task took up around 70% of development time, but the outcome was well worth it. Now, the game takes players through 60 hand-crafted levels across 5 domains, from the frozen plains of Antarctica to the sandy dunes of Egypt and eventually, to Hell itself. 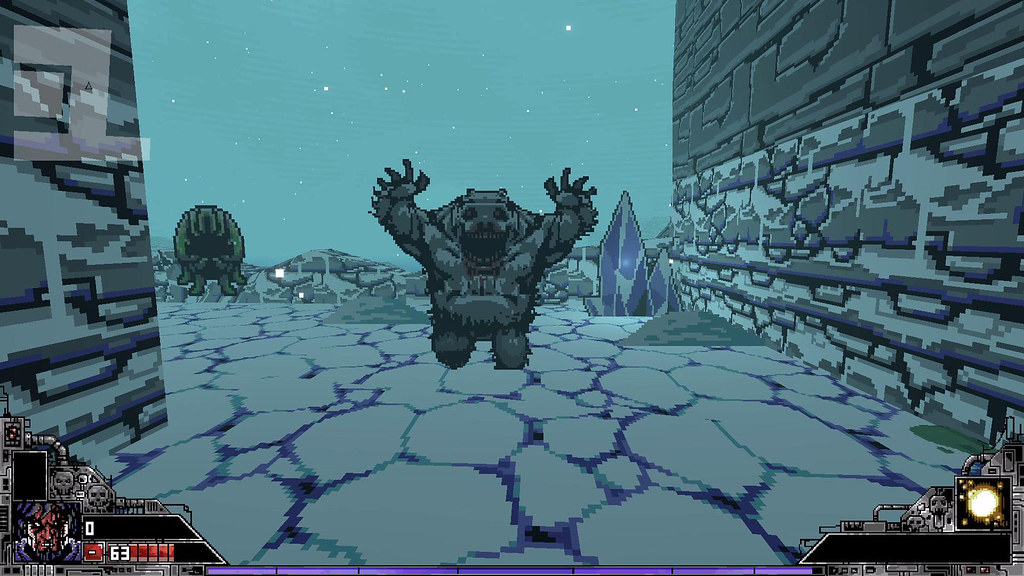 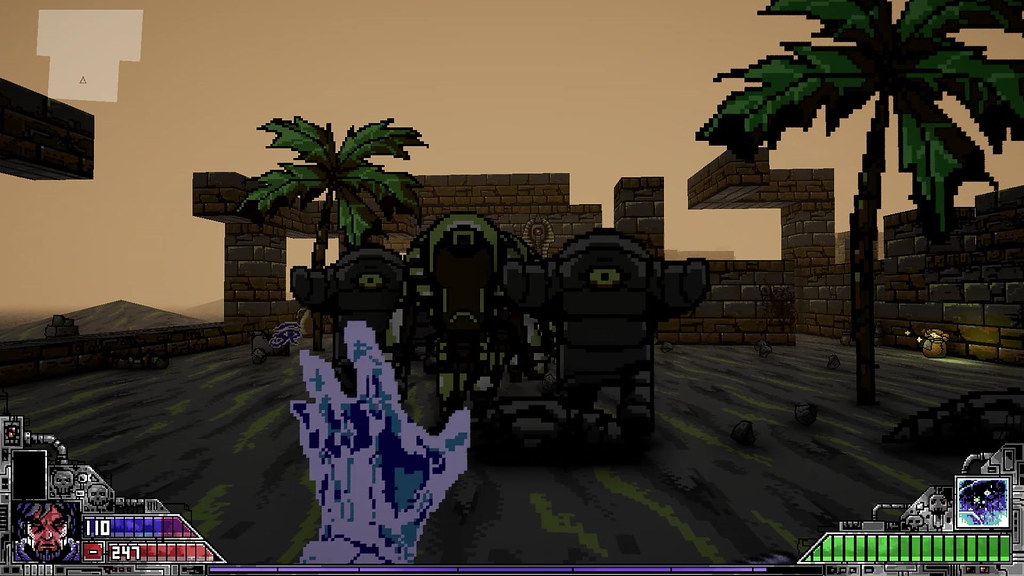 After the graphic overhaul and fleshing out the levels came the really fun part. Bringing together the tools of the trade for someone, whose vocation consists of blasting demons to pieces.

As we all know, a variety of cool guns is at the core of every good shooter, so completing the warlock’s arsenal was probably one of the most crucial quests to bring out the game’s full potential. Coming up with magic spells and designing the barrels spewing lead turned out to be both a challenge and a pleasure. 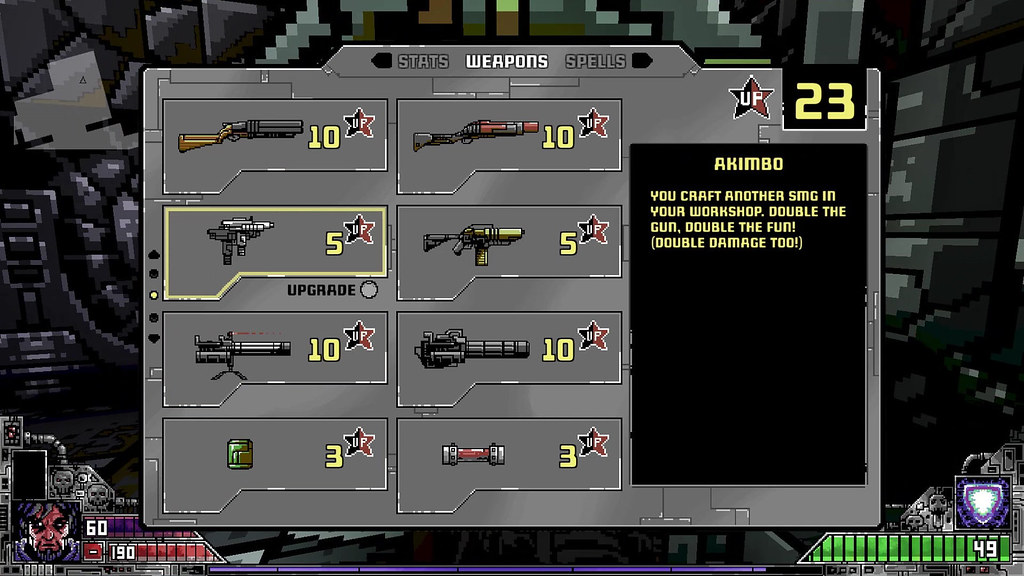 The game features a total of 38 guns, based on 12 types of basic weapons that can be improved and upgraded over time, with two unique weapons on top of that. Our team went through great effort to make each of the boomsticks feel powerful and satisfying, while at the same time ensuring they all feel unique and provide a different angle against the forces of evil. 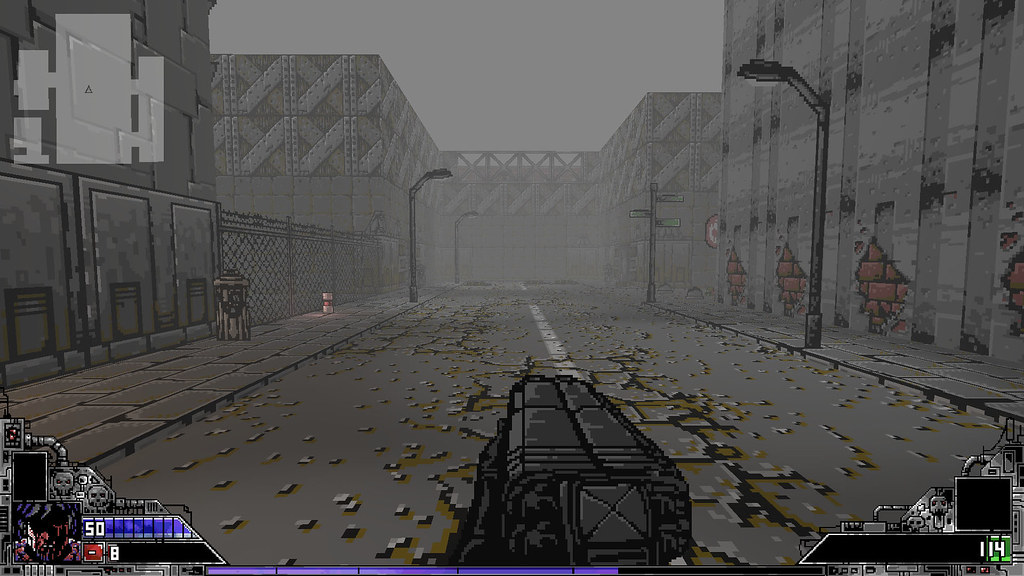 One of the guns I especially remember creating is the Harvester. No good shooter is complete without a double-barreled shotgun, but why not go even further? How do you increase the fun and damage of an already doubled gun? You double it. The outcome is a quadruple shotgun that delivers massive destruction to anyone that dares walk within its range.

And just a dash of RPG

I knew early on, that I wanted the game to extend beyond the usual frame of simply swapping out weapons and monsters every level. I wanted to offer players a feeling of progression and customizability to spice up the already action-packed experience. And so, on top of exploring the dungeons we implemented a system of character development, which allows the player to make sure his stats, abilities and weapons’ skills match his playstyle. 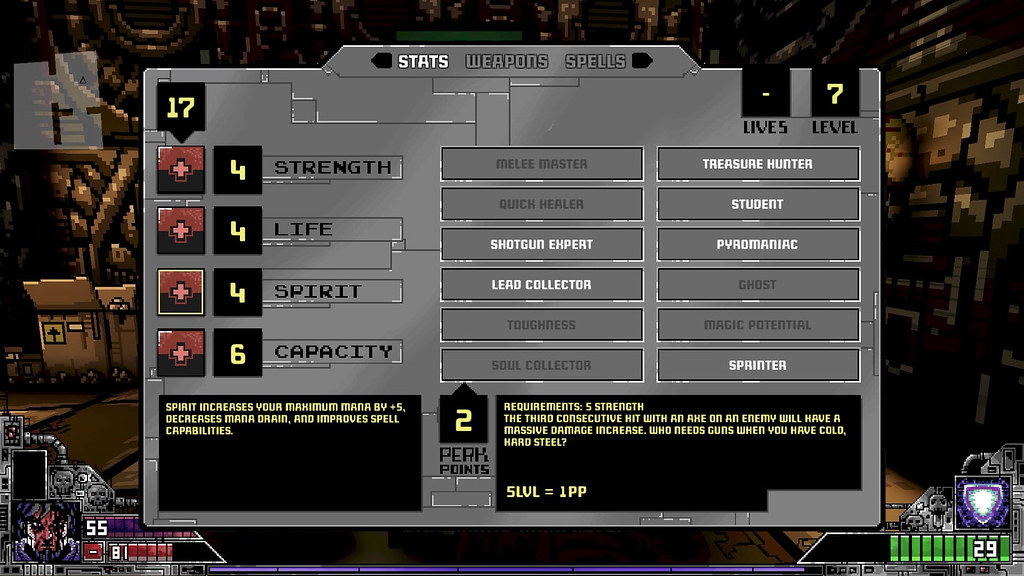 There’s a new preacher in the PS4 town

I always wanted my game to join the happy family of retro-shooters offering fast-paced gameplay, but I also dreamed that players across all platforms will be able to enjoy it. After four years since I started Project Warlock’s development, it’s time to allow PS4 players to taste the chaos and destruction they hopefully crave. Together with Crunching Koalas, the publisher of the game, we think the game plays great on PlayStation — see for yourself on June 9 when Project Warlock lands on PS4!