Meet the Colorful Characters of ReadySet Heroes, Out October 1 | Blogdot.tv

Hi PlayStation fans! I’m Elyse and I’m the Art Lead for ReadySet Heroes at Robot Entertainment. I’m happy to announce that ReadySet Heroes will launching October 1st on both the PlayStation 4 system and PC. You can pre-order the game now and score some fun content, which we’ll detail later in this post.

I can’t wait for you all to play and I’m excited to share more about the world of ReadySet Heroes and the characters that inhabit it. We created a rich fantasy realm in which you will encounter harrowing enemies, and challenging puzzles all designed to test your skills to prove yourself as a true champion.

Every game needs heroes, and we wanted to create a diverse lineup of charming characters for players to choose from. There are ten playable heroes*, each with a unique personality. Each have journeyed from their home to compete in the trials in hopes of becoming a champion. Players will start with 5 heroes to choose from. Players must complete certain challenges to unlock the remaining 5 heroes.

I’d like to introduce you to a few of my personal favorites and talk about how we approached their designs. 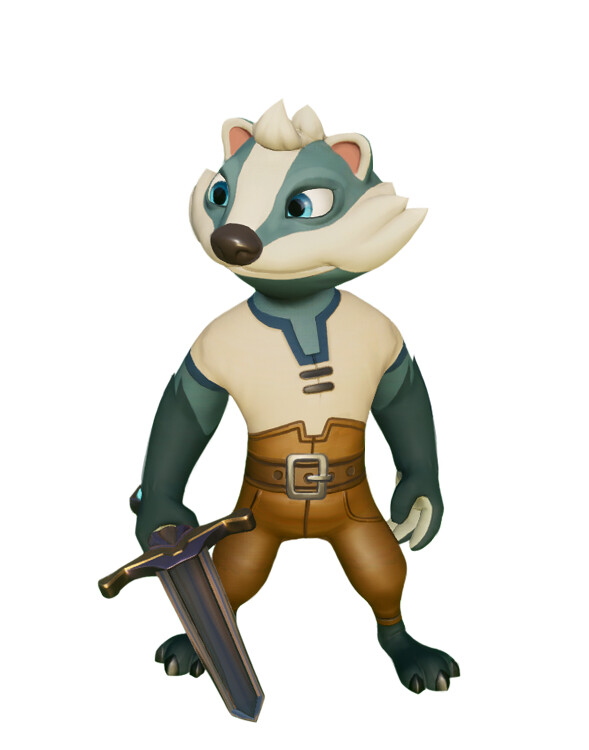 Tuck the badger is courageous, confident and adventurous, and was the first hero we created for the game. We explored many ideas of how to translate a badger’s characteristics into his design, which set the tone for the rest of the heroes. To achieve a more stylized aesthetic we choose to simplify the texture and pattern of his fur into similar shapes that would read well from the in game camera distance. 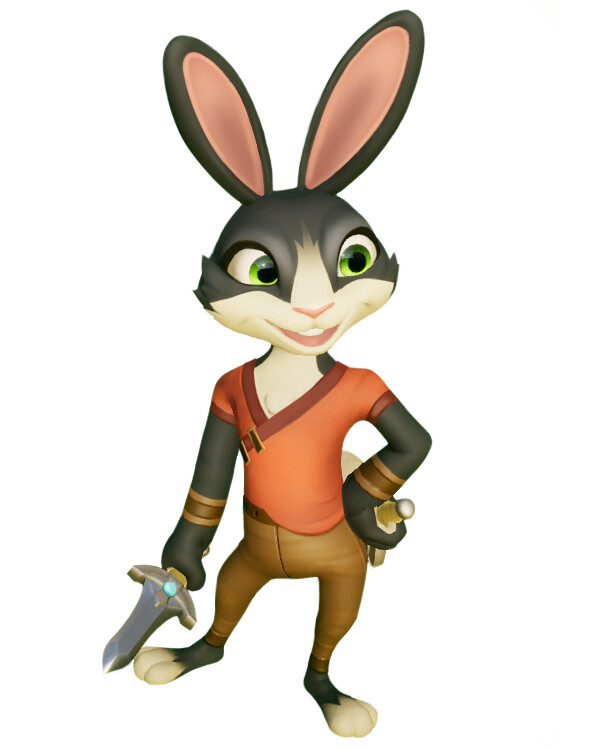 Dixie the rabbit is brave, funny, and a bit of a tomboy. A rabbit felt like a perfect fit for her energetic personality, and her giant ears and wide feet add a fun element to her silhouette. 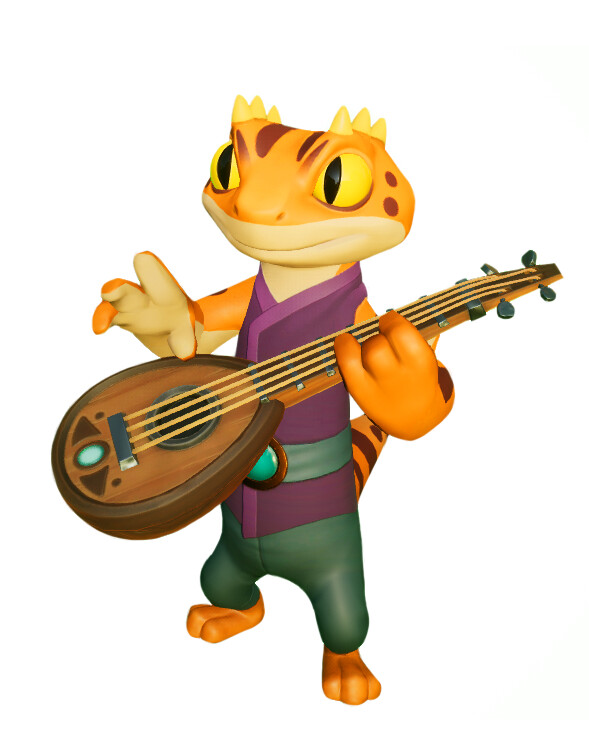 Ollie the lizard is a novice warrior, often clumsy and always good humored. Concepting a lizard was a good opportunity to add a splash of bright color to the hero lineup. It was a lot of fun to come up with the patterning of his spots and stripes! 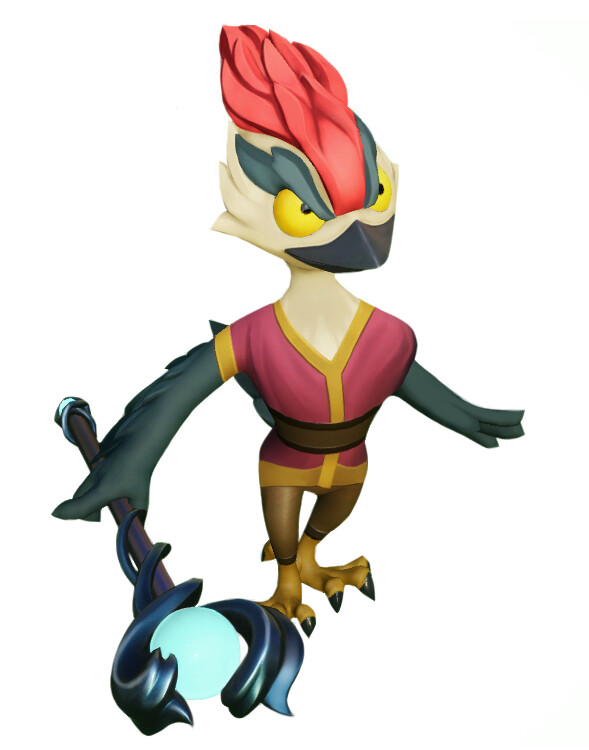 Willow the woodpecker is a sharp witted, serious competitor, with a mysterious nature. Adding a bird hero created an opportunity for the animators to have some fun in creating her animations. Check out how she glides into the scene and shows off that distinctly bird-like twitch in her movements.

When deciding how to approach the character designs, animal heroes felt like a great fit for the world we wanted. It created an opportunity to explore which animals would make for great heroes, but also created some additional technical challenges for the team to consider. The biggest of these was how to achieve visual variation in size and proportion while working on a shared skeleton for the animations. We explored various styles for the characters as shown below to work out which look would work with shared sets of animations, while still allowing for some variation between animal types. On the design side, the heroes also have very limited differences to their starting stats like speed, and attack, so we wanted to be careful to not imply those differences were greater by changing the size and proportions of the animals too drastically.

What would a trial be without enemies, and ReadySet features a lot! During the dungeon crawl portion of the game, players journey through a variety of different worlds which each feature a unique set of adversaries. The artists and designers worked closely together to come up with enemies which are both visually amusing and challenging to encounter.

When concepting these enemies our process was very organic to facilitate more creativity. The design team would meet with the concept artists to discuss their initial thoughts on what type of creatures fit well with each world. From there the artists came up with a number of sketches for enemies that could fit with the gameplay mechanics the designers had envisioned. Let’s take a look at a few of these enemies that you’ll encounter. 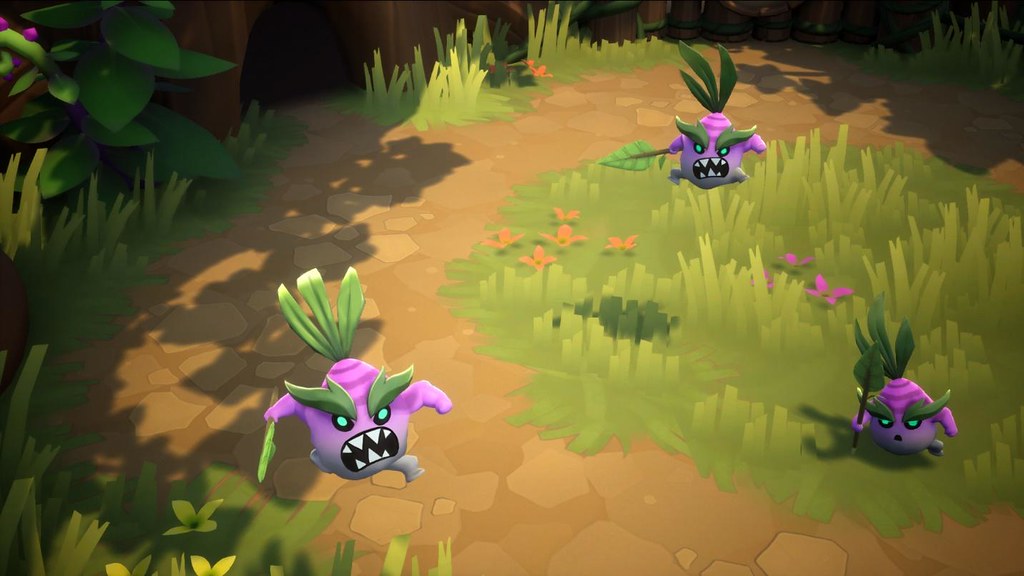 These little fellas may be small, but they’re just as spunky and determined. We tried out a number of various color schemes for them before landing on the pink and green combo marking them as denizens of the forest them reside in. You will rarely find one alone, and while they are not among the stronger foes their spear attacks can be a true challenge when they group up. The Skelly is exactly who you don’t want to discover walking around a graveyard at night. They were one of the first enemies to be concepted and help to set the style of the rest of the enemies with the exaggerated proportions of their heads and bodies. These foes will wander until they spot you then unleash a slashing attack with their broadsword. Lava Turtles are not the swiftest of beasts but be careful to not get in their way or you will find yourself set ablaze. They can be found roaming the paths of the cave world and will attack if you get too close. Their hard shell means they are tougher to defeat than they would otherwise appear. The Slime Knight is a great example of how we approached enemy design. The designers requested a larger character who was slow but extremely powerful. An armor suited enemy fitted well with the type of beast you’d find roaming the castle halls. To add an extra twist the concept artist came up with the idea of the purple slimes we had already created for the Castle to “possess” the armor, leading to the Slime Knight you see today. Do not make the mistake of underestimating them as one swing from their mace inflicts a large amount of damage.

Hopefully you’ve enjoyed learning more about the characters of ReadySet Heroes, and will be thinking about which hero you want to main – I’m calling Ollie now! There are many more characters to discover including some epic bosses to battle, so be ready for more to come.

Starting today, if you pre-order you can score a lot of exclusive goodies we created only for PlayStation players, including our digital soundtrack, and a special skin and crown that your champion can wear online and offline.

You’ll notice the classic PlayStation symbols on the crown and the signature PlayStation blue outfit.

On top of that, you will instantly get 10 PSN Avatars of our heroes and a theme to decorate your PlayStation 4 system.