In recent years, mechanic simulators became widely known and many players fell in love with the immersive experience offered by this genre. One could think that there are bound to be limits to what you can show in a game like that, due to the limited amount of mechanic-related jobs. However, you can do a lot with it if you let your imagination run wild.

Ever wondered what the future brings? Ever wanted to work on huge, technologically advanced machines? In the future presented in Mech Mechanic Simulator, the gigantic, powerful robots are what matters the most. They are used for various purposes and it’s your job to prepare them for it.

As a mech mechanic, you’ll have the opportunity to not only repair and personalize the mechs, but also grow your business and compete with the biggest corporations of the world. If there’s one thing that we can assure you of, is that if you’re a fan of simulators, you definitely won’t get bored with Mech Mechanic Simulator. It presents you with numerous robotic parts, colors, and stickers that can transform mechs into anything you need them to be. Moreover, as your business grows, you can buy more working stations on which you’ll be able to work on rust removal, painting, calibration, and many more.

There are two aspects that make this game unique in our eyes. One is the possibility of going rogue. The main goal of every player should be to expand their workshop, but one doesn’t have to abide by the law in order to achieve that. There are encrypted messages with job offers from some shady people and a black market on which one can buy stolen parts for their mechs. If you want to play by the book that’s fine, but you do not have to. We believe that having that choice makes the game more interesting.

In addition, Mech Mechanic Simulator gives you the opportunity to get involved in all aspects of the job. Now you can also get out of the workshop and hop into the mech in order to calibrate it. Even though your main focus will be on the mechs, you’ll have the whole beautiful world outside your window filled with neon lights and flying cars to look at and a perfectly sterile workshop to roam around. You’ll be mostly on your own, but there is one amusing android that will keep you on your toes with its funny jokes.

We thought that it would be a shame if a game like that did not come to consoles, so our team worked hard on bringing it to you and now, as it comes to Xbox One and Xbox Series X|S, we cannot wait for you to play it. We’re very excited to share that game with you and we hope that it will get the recognition that it deserves 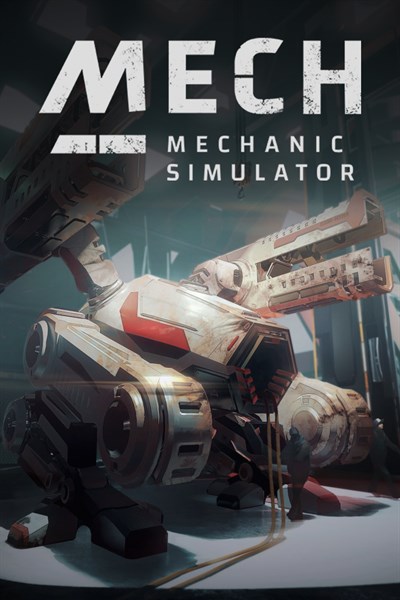 ☆☆☆☆☆
★★★★★
$19.99
Get it now
Mechs are our future!
What happens when cars are no longer around? Gigantic robots take over! Powerful, destructive and strong… They are used in sports, at war… and for you, they are moneymakers.
Become Mech Mechanic and open your own workshop to dismantle, fix and rebuild gigantic robots. Every mech has its own special purpose and as a Mech Mechanic not only will you be able to diagnose, repair or change the parts but also paint, update and accommodate mechs for their new function. Even if you’re the best Mech Mechanic in the world, you’ll find the parts that are unfixable. Do what you can with what you’ve got, but if you find some junk among your parts… dismount it and order new ones. If you don’t like wasting things, don’t worry! Mech Mechanic Simulator lets you remanufacture and renew the parts. It’s your choice: sell, recast or restore your parts!
Gain some respect among other corporations and get access to more advanced machinery. But be careful, it’s not that easy. You’ll have a lot of expenses. Raw materials and equipment are not cheap, the quality of your parts can drop rapidly, and some of the customers have really high demands. If you don’t want to be put out of business, you’ll have to make your workshop look good as well. Can you maintain a good reputation?
Become an expert in your field and compete with the most powerful corporations of the future. Who’s going to produce the most modern, technologically advanced mech? Make sure it’s you!