Hello prospective battlemages! We’re excited to announce that Spellbreak (Game Preview) is now available on Xbox One! We wanted to give you a quick look at what you can expect when venturing into the Hollow Lands. Spellbreak is a third-person action-spellcasting game where you take on the role of a powerful battlemage and master the elements while fighting against other players.

At the start of every Spellbreak match, you’ll choose from one of six classes like Pyromancer or Frostborn, each aligned with a different element. Over the course of the 15 minute match, you’ll level up and gain access to new skills, find powerful magical gauntlets that allow you cast new spells and sorceries, and discover runes giving you the ability to become invisible, fly, teleport, and more. You can further customize your battlemage with a selection of more than a dozen different talents to truly build your own character. With all of this power, you can play solo against a field of 41 other players or team up with your friends and face the challenge together.

Speaking of power, let’s talk about some of our spells and sorceries. But, before we do, it’s worth pointing out a crucial difference between Spellbreak and other similar games: our spells are actually projectiles and not hit-scan “bullets.” This means you’ll not only need accuracy to hit your target, but timing as well. On the flipside, when you’re under attack, you’ll see the incoming spell and be able to dodge through movement or counterattack with abilities of your own.

For example, when using the Stone gauntlet, you’ll have access to the “Shockwave” spell and the “Boulderfall” sorcery. Shockwave causes the ground in front of you to erupt in jagged earth, damaging anyone unlucky enough to be in its path. The Shockwave follows the terrain, traveling up and down hills, but since it’s ground-based, your target can dash out of the way or leap over it. If your opponent is farther away, Boulderfall will let you launch a rapidly-growing boulder arcing through the sky that lands with an explosion.

As a battlemage, you’ll be wearing not just one but two gauntlets, giving you the ability to cast two different spells and two different sorceries. This doesn’t just mean greater flexibility; in Spellbreak, the elements can affect not only each other but the battlefield as well. Remember when I mentioned counter-attacking above? If you used Boulderfall on an opponent who was wearing a Wind gauntlet, they could use the Wind Shear spell to redirect the boulder— possibly even back at you! If you’re using a Fire gauntlet in addition to your Stone gauntlet, you could cast Shockwave through a Flamewall to transform the cracked earth into a stream of deadly flames or you could cast Boulderfall through the same Flamewall to set it ablaze as it flies through the sky.

Elemental interactions aren’t just limited to offensive abilities either. Combine a Toxic Cloud with ice and you can freeze it to make a solid object that can be used to climb up or block off an area (especially if you then cast a Fireball at it, causing it to explode in an especially dangerous green fire). An electrified Tornado will shock anyone foolish enough to come near, letting you deny an area to your opponents. There are dozens and dozens of these interactions in Spellbreak but you’ll have to do your own experimentation to find them all.

Before I leave you, I want to mention that Spellbreak is an ever-evolving game. We’ve been developing it with our small, closed beta community of players for more than two years now, adding new features and changing things based on feedback. With Spellbreak (Game Preview) launching for free today, it’s only the beginning of where we want to go, and we’re thrilled to go on this journey with you. 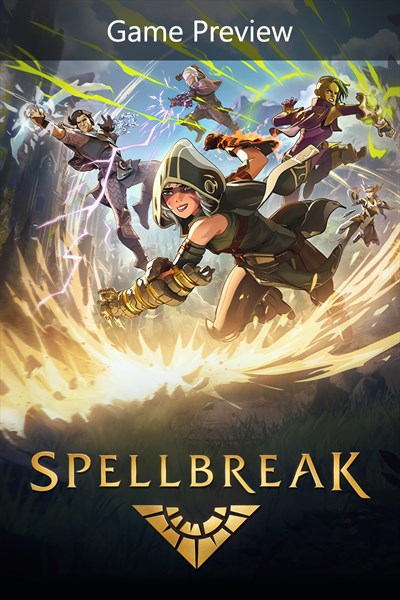 ☆☆☆☆☆
★★★★★
Get it now
This game is a work in progress. It may or may not change over time or release as a final product. Purchase only if you are comfortable with the current state of the unfinished game. Unleash your inner battlemage in Spellbreak. When magic is forbidden, locked in the iron grip of the Vowkeepers, it’s up to you to resist and reclaim what’s yours. Harness the raw power of your gauntlets and tap into the unimaginable forces of the elemental planes . Soar into fierce battles, through floating islands and impossible terrain, to unleash the Breaker within. BUILD YOUR BATTLEMAGE Choose a class: Frostborn, Conduit, Pyromancer, Toxicologist, Stoneshaper, or Tempest. Each has its own playstyle, which you can customize with talents as you grow in power. Which will you master? COMBINE THE ELEMENTS A mighty battlemage isn’t limited to just one ability. Seize hold of two powerful magic gauntlets and blend devastating spell combinations to control the battlefield with fiery tornadoes, electrified gas clouds, and more! OUTPLAY YOUR RIVALS Explore the map and find tactical advantages to outplay your opponents. Discover hidden chests that contain magical runes and game-changing equipment. These items give you the ability to fly, teleport, control time, become invisible, and more. ENTER AN EVER-EVOLVING WORLD The fractured battleground of the Hollow Lands is just the beginning of your adventure in the greater world of Primdal. New chapter updates will reveal more of the deep, rich lore behind this powerful place and its people. BATTLE ACROSS THE HOLLOW LANDS Form a party of powerful battlemages and vanquish other players to stand victorious in this unique battle royale! Future updates will unlock exciting new game modes. Can you summon the strength, skill, and cunning to unleash the battlemage within? Full details on the latest status of the game, how you can give feedback and report issues can be found at playspellbreak.com.