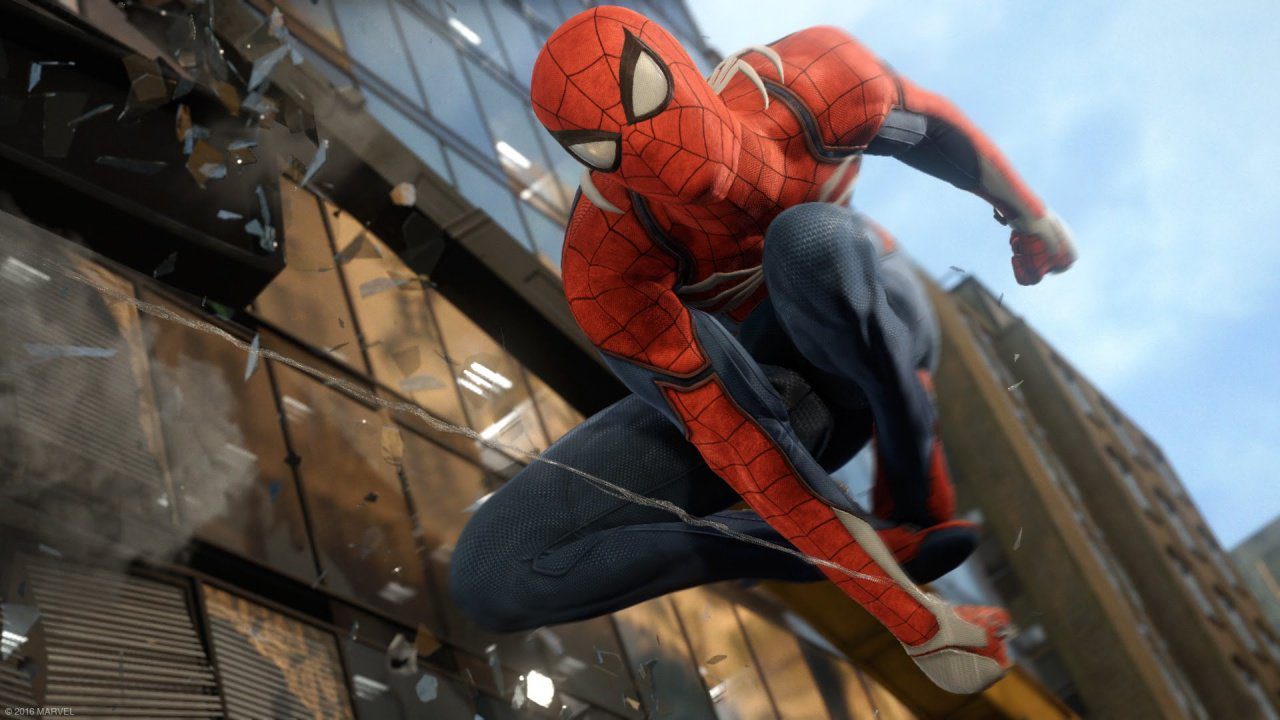 Let’s get right to it: Marvel’s Spider-Man, the latest effort from Insomniac Games is quite possibly one of the best superhero games of all time, and inarguably the finest game starring the wall crawler to date. It’s not quite the Arkham beater you might have been hoping for, but it comes pretty damn close in our eyes.

Insomniac’s take on Spidey doesn’t attempt to tie-in to the comic books, or to the MCU version of the character played by Tom Holland. Instead, they’ve opted to create their own take on the character – one that fuses elements and characters from both the comic books and the movies.

The Peter Parker we see here isn’t a teenager, but an experienced crime fighter who’s put away his fair share of super-powered criminals. The game picks up as this more seasoned Spider-Man heads out to his final confrontation with the Kingpin, a brilliant little sequence that acts as an exciting tutorial, and sets up the thrust of the game’s narrative. With the Kingpin of crime locked up, how long will it take for the city’s criminal element to descend into chaos?

We won’t go into the rest of the story here, as there are plenty of genuinely surprising cameos and fan favourite characters that show up, and being surprised by these moments in the story is all part of the fun – especially for fans of Spider-Man lore.

Classic villains rear their heads in some of the most memorable and creative boss battles we’ve ever seen in a big budget video game, with Insomniac making fantastic use of Spidey’s unique powers to create thrilling and truly memorable set pieces that don’t rely on quick time events anywhere near as much as previous trailers for the game had led us to believe.

Even if you don’t have a GCSE in Spider-Man history, there are enough twists, turns, and suitably shocking character moments over the course of the 20 hour story to keep players invested, thanks in no small part to some fantastic vocal performances and detailed facial animations. This game truly has all the makings of a classic Spider-Man story, and by the time the credits roll, you’ll be desperate for a sequel. 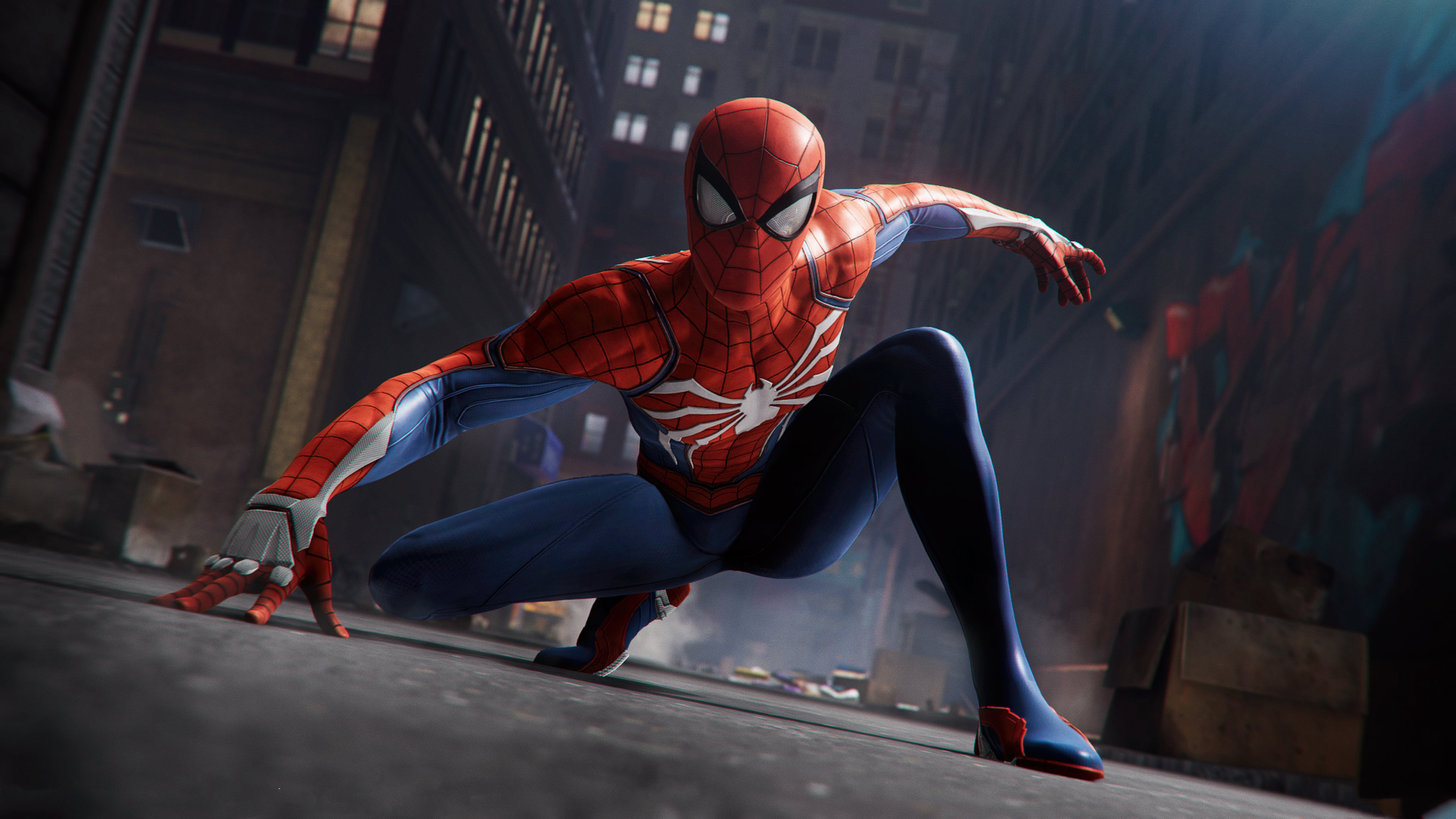 When you’re not playing through the story, you’ll be swinging across the city, catching thieves just like flies. We are happy to report that web swinging in this game is the best it’s ever been, and will absolutely recapture the thrill you felt the first time you explored New York in 2004’s Spider-Man 2.

Guiding the webhead through a beautifully realised New York City is an absolute joy, with fluid movements and tight responsive controls ensuring that you’ll be gracefully pirouetting your way across Manhattan in no time at all. Spidey’s animations are absolutely gorgeous, and Insomniac have smartly added a parkour button, which means if you swing into a building or any other solid object, you’ll simply bounce off or run over it and be on your way, without bringing your momentum to a grinding halt.

It’s also easier than ever to change direction or altitude while swinging, thanks to buttons that let you zip across buildings and grapple to certain ledges. The novelty of leaping off the tallest building you can find before shooting out a web line and swinging away at the last possible second still hasn’t worn off for us, even hours into the game.

In fact, in our first few hours of play, we were too distracted by all the fun little side missions to even be thinking about getting on with the story. Don’t get us wrong, Marvel’s Spider-Man doesn’t reinvent the wheel in terms of open world activities by any stretch, but because the simple act of getting from A to B is so enjoyable,  you won’t mind the occasional repetitive crime or collectable.

After all, swinging along before jumping down to stop a random mugging or kidnapping before carrying on is what being Spider-Man is all about, and these random side events feel so seamless thanks to a smooth, fluid combat system, so they rarely disrupt your Spidery day. There are also civilians to save and car chases to get involved with, but we would have liked a little more variety in this area.

Other side tasks besides your standard crime fighting involve hunting down backpacks from your old school days, and taking photos of famous landmarks across the city, including the Empire State Building and Avengers Tower – these aren’t particularly thrilling jobs, but they often throw up nice little Easter eggs for fans.

There are a couple of slightly more involved side-missions too, some of which involve a couple of lesser known Spidey villains – but the majority of these don’t really leave much of a lasting impression. Oh, there are also enemy bases to take, which offer waves of enemies which can be taken out using either stealth or… a louder approach.

Completing any of these fun little diversions will contribute to unlocking cool new suits and upgrading your gear to be the best Spider you can be, which means that everything you do while exploring the city will has some kind of tangible payoff, which might not be why Peter Parker does what he does, but we want the loot, dammit. 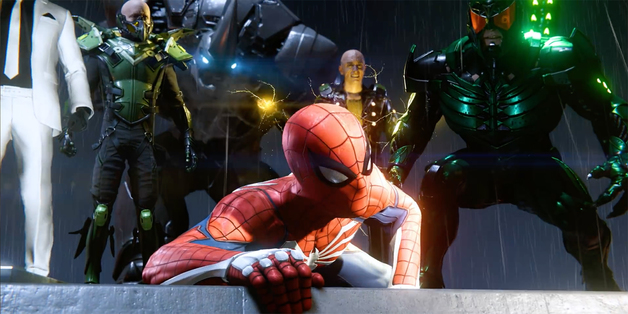 Because Spider-Man is a modern AAA title, it obviously has unlockable skill trees and gear for you to upgrade. Much in the style of the Arkham games, you can get equipment that aids you with stealth, combat, and movement, with some really fun new gadgets that can picked up later on in the game, including impact webbing that pins enemies instantly to walls, and a Spider drone that will aid you in battle.

Combat is an absolute blast by the way, and makes the most of Spidey’s versatile set of powers. It takes a little getting used to at first, but you’ll soon be dodging, webbing, and punching your way through hordes of goons. The game particularly seems to reward players for paying attention to their surroundings in a fight, which we really like.

The webhead is often able to gain an advantage by throwing objects at enemies, or pulling heavy environmental hazards down to immobilise foes. Any bad guys that are close to walls can be webbed to them to take them out of the fight, while Spidey can even bounce off of objects to take out multiple threats at once.

Assessing the environment before a fight and then making the most of it can be the difference between life and death, as too many enemies attacking at once can overwhelm and take a real chunk out of your health. 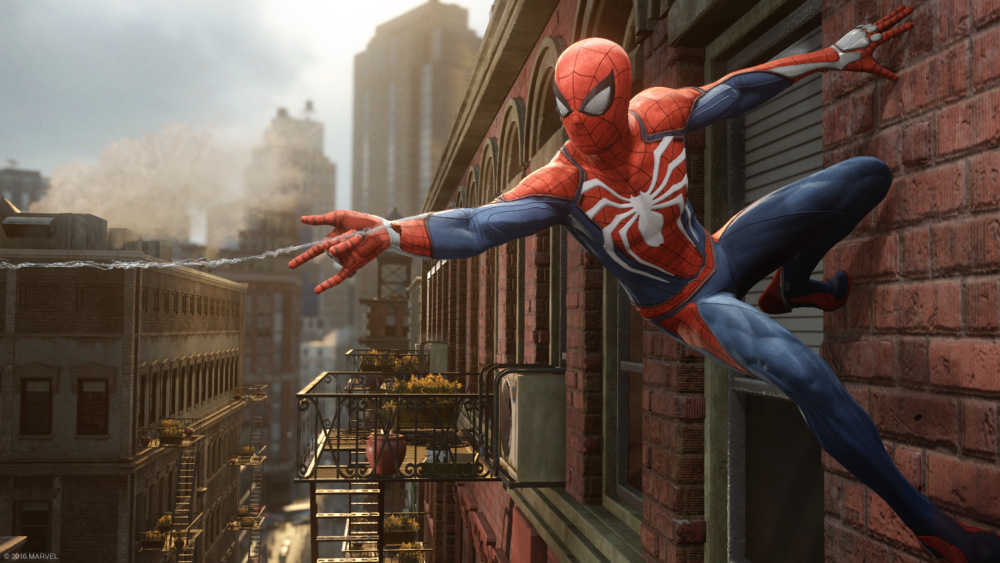 Stealth is slightly less fun than the straight up combat, but it still has its perks. Like the Arkham games, there are a multitude of gadgets and skills to help you screw with your victims as you creep overhead, and singling a foe out before webbing them to the ceiling without alerting the others honestly never gets old.

In terms of creating a rewarding interactive Spider-Man experience then, Insomniac has absolutely nailed it. Simply put, it has never felt this good to control the webslinger, with both movement and combat feeling better and tighter than they ever have in a Spidey game. 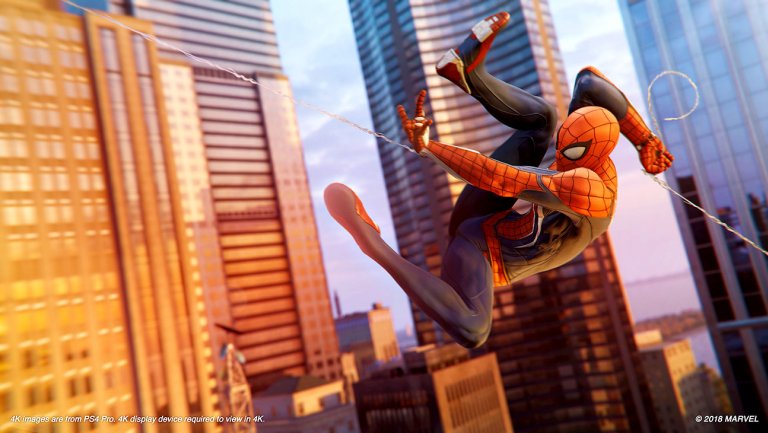 One thing we can say is that for better or worse, is that the Peter Parker side of Spidey is a huge part of this game. Insomniac have clearly understood that Spider-Man’s secret identity is a vital part of the character, and have incorporated him into the gameplay.

There are sections where you’ll explore areas as Peter, learning more about other characters and even solving the occasional lightweight logic puzzle in the lab you work at, which nets you materials which can also be used to craft new equipment and suits. These parts of the game aren’t terrible, but they can interrupt the flow of all the web-slinging action, and – at times – come dangerous close to feeling like padding.

So too do the Mary Jane gameplay sections, which combine basic stealth and Uncharted style puzzles as our intrepid Daily Bugle reporter investigates the game’s larger mystery alongside Spider-Man.

These sections don’t take up a ton of time, and it’s nice to see MJ play a more active role in the story instead of being relegated to model/failed actress in distress, but you’ll likely once again be asking yourself why you aren’t webbing bad guys to walls and kicking them in the head at these points. Thankfully these areas are few and far between, and for the most part do come at times where the story could use something of a breather. 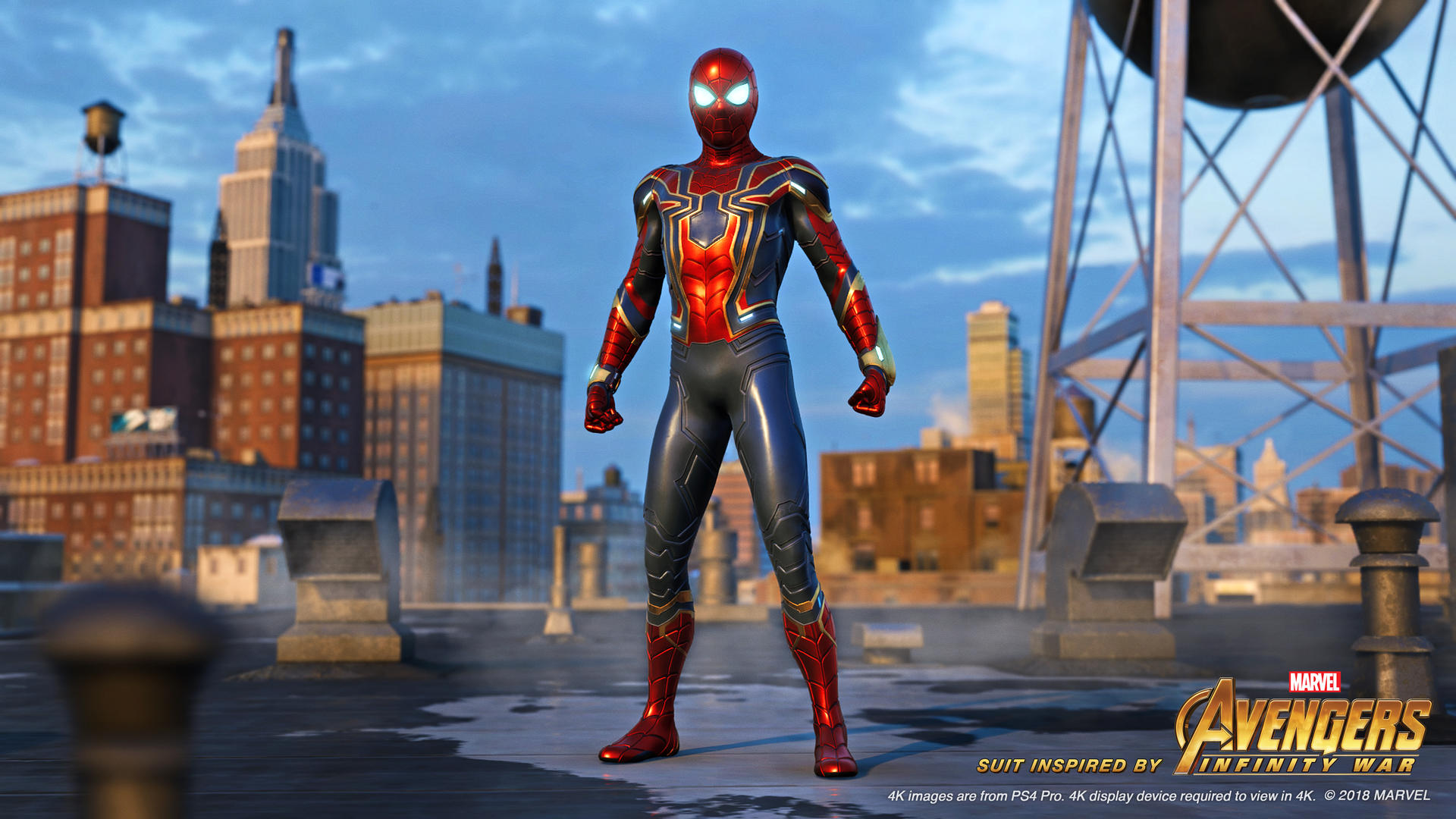 As the name of the game suggests, however, Spider-Man is the real star of the show here. Whether you’re out exploring the game’s massive open world and high-fiving New Yorkers on the street, or chasing down a stolen car while you listen to J. Jonah Jameson discuss your latest exploits on his unintentionally hilarious Alex Jonesesque podcast, Insomniac games have done an absolutely stunning job of creating a believable, lived-in world for the webhead to inhabit.

Simply put, Marvel’s Spider-Man is a triumph on almost every level. Even the occasional bit of padding in the story and some repetitive crimes can’t get in the way of a game that looks incredible, plays even better, and manages to tell one of the most exciting stories in a video game this year.

If you’re a fan of the webslinger, or even if you’re just after a truly polished and rewarding AAA experience to keep you busy for a week or two, you need this game. Spider-Man has honestly never been quite this amazing.