Have you ever thought about how great it would be to experience the adventures of your favourite TV series? Maybe next to one of your favourite heroes? If the answer to these questions has been: “Hell, yes!” then let me introduce you to Landflix Odyssey!

Landflix Odyssey is the latest game published by Fantastico Studio and tells the misadventures of a lazy binge-watcher named Larry who, after making a mistake in using the batteries of his TV remote control, finds himself sucked – literally! – into the Landflix streaming platform.

For Larry it is of crucial importance to retrieve the special batteries, because they are the only possible way to escape from the Landflix Odyssey. But unfortunately for him, even the terrible CEO of Landflix, an evil and vicious man, wants to rescue and use the incredible power of the batteries, blocking Larry from escaping.

As Larry, we will have to explore the worlds… oops, I mean, the TV series, inside the Landflix platform, so that we can retrieve the batteries once and for all and return to the dear, old and beloved sofa.

As you may have guessed, the TV series are the game worlds we are going to explore and each one of them is a parody of a real version. There are five TV series in total and in each one Larry will have the possibility to use a specific power linked to that world.

For example, in Peculiar Stuff we will be able to go into a parallel dimension where we have to move quickly to avoid running out of air. In Blind Evil, we can use a special stick to hit enemies, or even use it as a grappling hook. In Elder Thrones, we’ll be able to defeat the fearsome enemies by using only the sword.

Or again, in The Standing Zombie, it will be essential to use the crossbow in a creative way, in order to use it both as a weapon and as a method to overcome certain obstacles. Without forgetting Going Mad, where we could take some really special medicines to increase our reflexes and slow down time.

And once we have recovered all the batteries, blue tickets and coins – necessary to buy the game levels during the play, as if they were episodes of the TV series – we can always dedicate ourselves to the challenges available in the Special Features, where our reflexes will be put to the hardest test.

There are many other surprises in Landflix Odyssey and I hope you will have fun finding them. In the meantime, let us know what you think of the game: you can find us on Twitter, Facebook, and Instagram. See ya! 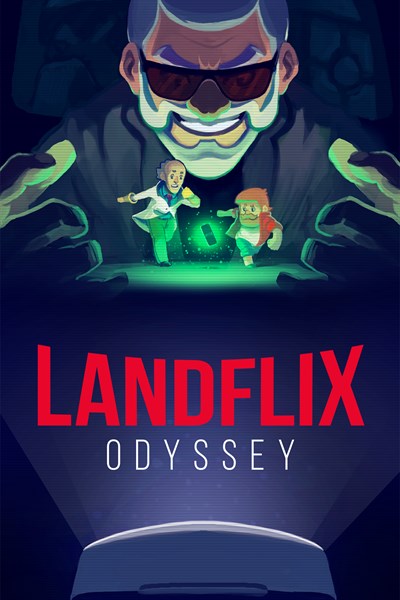 ☆☆☆☆☆
★★★★★
$14.99
Get it now
Xbox One X Enhanced
Landflix Odyssey is an action platform in which players play as Larry, a lazy binge-watcher who finds himself trapped inside the streaming service after using special batteries. This incredible world is called Landflix! In order to return home he has to recover all five batteries ended up inside the TV shows on the Landflix platform. Landflix Odyssey is a clear reference to video-on-demand platforms and TV shows universe. In each TV show our hero can count on some special powers that will help him overcome obstacles and dangers in any game world. Our hero can move through parallel dimensions, use magic swords, do superhero stuff with superhero tools, take drugs to increase productivity and defend himself with a crossbow against hordes of zombies.