Gods and Knights battle… Streamers? Lancelot and Mizkif clash in Smite’s Round Table Update featuring Lancelot, The First Knight of the Round Table, and new playable skin: Mizkif Thanatos!

You’ve almost certainly heard of the legendary Lancelot, the finest knight of the Round Table, the greatest jouster to ever live. But you may not know of his darker side — an undercurrent of savagery and the bloodlust of a berserker.

Lancelot’s playstyle revolves around his jousting ability, perfect for the role of an Assassin. He has two modes, mounted, and unmounted, toggled by summoning his trusted steed. Lancelot’s abilities change drastically when he mounts up, and his speed increases — ideal for chasing down fleeing enemies. While on foot, Lancelot proves his prowess in combat with his lance and shield. His ultimate, The Grand Joust, creates a Jousting List, the perfect setting for Lancelot’s glorious victory.

Mizkif is now playable in Smite! The all-new Mizkif Thanatos skin soars into battle alongside the Egg Head Ward and Mizkif Announcer pack in the Mizkif bundle. But wait, there’s more! The One True King Games Expo revealed exciting Smite announcements and kicked off the OTK Smite Invitational Tournament. This absolutely massive content creator tournament gives you the chance to get loads of free content in-game; just by watching Mizkif and the streamers playing in the tournament!

Finally, we collaborated with Nightmode, a DMCA-Free EDM label created by streamer Jericho. This collab will include an Athena skin for One True God, Canadian electronic producer and vocalist, available during the mid-patch! The TMNT, Slipknot, and Heavenly Light events will also continue, including the TMNT Slash Kuzenbo skin being added to the Cowabunga Chest!

Keep an eye on the store for the Code Slasher King Arthur bundle, and join us for Smite Night every Saturday! 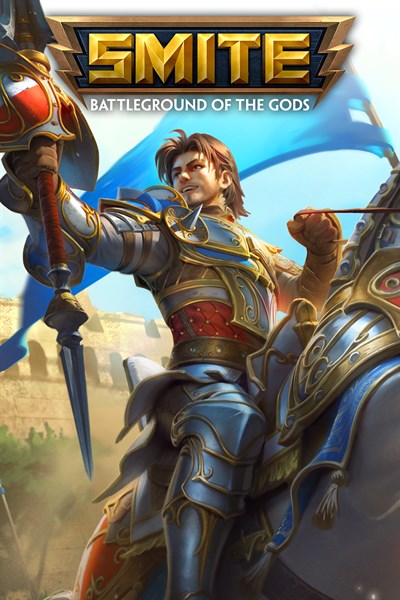 ☆☆☆☆☆ 1237
★★★★★
Get it now
Xbox One X Enhanced
Enter the Battleground of the Gods Join 35+ million players in SMITE, the world’s most popular action multiplayer online battle arena. Become a legend of myth, enter the Battleground of the Gods, and play FREE now! 100+ Gods
Unleash each deity’s unique strategies, legendary weapons, and earth-shattering powers. Rain lightning down upon your foes as Zeus, assassinate from the shadows as Loki, or transform and trick your foes as the Monkey King, Sun Wukong. Which God will you choose? Unique Perspective
Unlike other MOBAs, SMITE puts you directly onto the battlefield with a third-person action viewpoint. From blind-side ambushes to aimed shots, a new pantheon of strategic possibilities awaits. Become Godlike
Never played a battle arena before? Don’t worry. Auto-buy, auto-level, and the deathmatch-like Arena mode let you jump right into divine MOBA action. Aspiring pro? Top the ladders, join a competitive team, and you too could be playing at the SMITE World Championship. © 2012 – 2021 Hi-Rez Studios, Inc. "SMITE", "Battleground of the Gods", "Titan Forge Games", and "Hi-Rez Studios" are trademarks or registered trademarks of Hi-Rez Studios, Inc. in the U.S. and/or other countries. All trademarks and copyright material are property of their respective owners. All rights reserved. TRANSFORMERS and all related characters are trademarks of Hasbro and are used with permission. © 2021 Hasbro. All Rights Reserved. Licensed by Hasbro.