Even nearly three years after launch on Xbox One, the party never ends in Killing Floor 2 and this Spring we’ve returned with the freakish delights of the Neon Nightmares update. We’re back with only the finest map, weapons, Cyber Rave themed cosmetics, quality of life improvements, and endless hordes of Zeds that the techs at Horzine can provide.

A modern take on an ancient classic, the
Compound Bow provides the sleek precision, penetration, and whisper quietness
that any Sharpshooter would adore all in a light highly durable Carbon Fiber
frame. Have you wished your enemies would just stand still for a few seconds
while you line up your perfect headshot? You’re in luck, as every Compound Bow
comes paired with liquid nitrogen cryo arrows to make even the rowdiest
Fleshpound chill out for a moment. As with our previous weapon offerings, this
weapon is available at launch for purchase paired with 5 custom weapon skins to
demonstrate your own personal flair.

As a complimentary gift to all our party
guests, we’ll be providing the latest prototype from the Horzine Research
Group, the HRG Incendiary Rifle custom-tuned to the pyromaniac sensibilities of
the Firebugs of the world. Our researchers took a look at the M16 M203 grenade
rifle and asked the timeless question “But if it had more fire?” and then
proceeded to add incendiary rounds into the magazine and figured out how to
shove a molotov cocktail into the grenade rounds. Twenty-two committee meetings
later, they settled on an orange color scheme. Perfect for locking down wide
areas with ground fire or specifically enraging that one Scrake at 200 yards
away, we think you’ll enjoy what this fine piece of hardware brings to the
table.

Not to be outdone by Hans, the Patriarch has
developed his own descending lair “Biolapse” within the Horzine Biotech
facilities full of traps and unique rooms showcasing the full pipeline of Zed
cloning development for the aspiring mercenary to discover. 1st place Winner of
the Non-Survival group of the community mapping contest, we’re excited to bring
this new playground of gore and destruction to a console near you.

Complete all the seasonal objectives by April
21st to earn a double pack of AA12 Jaeger Dynamic Skins so you can embody a
powerful display to the world of just how much ammunition your magazine has
left while exhibiting the colorful panache of the neon season. Party guests can
earn exciting prizes via the Cyberpunk Ticket drops throughout the event to
obtain exciting new Cyber Rave themed cosmetic accessories or Cyber Punk
apparel from Spring seasons past. Only the most ardor mercenaries will reign
supreme on the Fashion Floor.

We’re fully committed to continuing to add new
improvements to the delight of our fans. With this update, we took special aim
at refining perk skills and weapons identified through our community surveys
and scouring the discussions of the world. This includes tunes to the Zed Time
skills for Berserker and Survivalist as well as improving the usability of
Firebug’s Ground fire skill for more weapons in its arsenal. Stay safe and
healthy everyone and see you all on the Killing Floor.

The Neon Nightmares update is free and available now for Killing Floor 2 players on Xbox One. 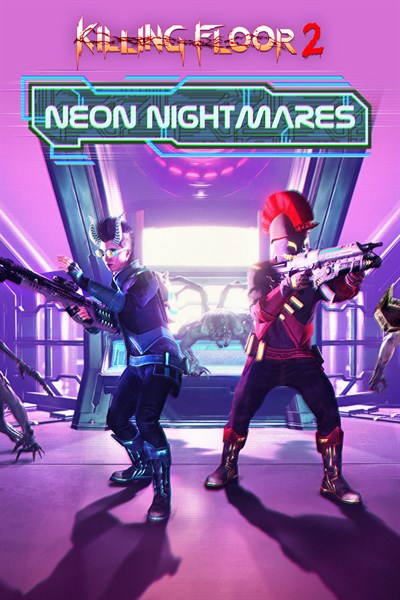 ☆☆☆☆☆ 287
★★★★★
$39.99
Get it now
Xbox One X Enhanced
OVERVIEW: In KILLING FLOOR 2, players descend into continental Europe after it has been overrun by horrific, murderous clones called Zeds that were created by rogue elements of the Horzine Corporation. The Zed outbreak caused by Horzine’s failed experiments has quickly spread with unstoppable momentum, paralyzing the European Union. Only a month ago, the first Zed outbreak from the original KILLING FLOOR ripped through London; now the Zeds are everywhere. Civilization is in disarray, communication networks have failed, governments have collapsed, and military forces have been systematically eradicated. The people of Europe are now focused on self-preservation, the lucky few who survived having gone into hiding. But not all have given up hope; a motley group of civilians, soldiers, and mercenaries have banded together to fight the Zed outbreaks from bases across Europe. When an outbreak is detected, the players are sent into Zed-laden hot zones to exterminate all threats using whatever means necessary. Welcome to the Killing Floor. KEY FEATURES: • Xbox One Exclusive Content – Spray zeds with liquid nitrogen and shatter them to pieces with the Freezethrower, an Xbox One exclusive weapon for the Survivalist Perk. The Freezethrower comes with eight weapon skins to customize your weapon’s appearance. Also, you can sport the Wasteland Armor uniform, an Xbox One exclusive cosmetic outfit, with five different styles. Killing Floor 2 includes all previously released DLC packs including Tropical Bash, The Descent, and elements of the Summer Sideshow. • Visceral Gore – KILLING FLOOR 2 ramps up the gore with a proprietary, high-powered, persistent blood and gore system bringing new levels of fidelity and brutality. Players will send entrails, severed limbs, and blood flying as they wade through hordes of enemies. • Survival Game Mode: Play Solo or Co-op with Up to 6 Players—In this game mode, player team up against hordes of AI controlled Zeds across multiple waves, collecting Dosh for each Zed killed and using it to buy weapon upgrades, until they reach the boss… or die trying • Versus Survival Game Mode: Play PvP with Up to 12 Players – Be the Zed! In this game mode, two teams of up to six players take turns, one team playing humans and the other a mixture of specially modified Zeds backed up by AI controlled Zeds. After each team has a turn playing both humans and Zeds, they both receive a score based on their performance and the higher score wins! • Terrifying Zeds – Ranging from the lowly clot to the might of the cybernetically enhanced Patriarch, players will have to deal with a vast array of Zeds trying to kill them using advanced and deadly artificial intelligence. The Zed hordes unleash devastating, coordinated attacks to slaughter the players, pushing the challenge level and fear factor to new levels • Unique Blend of Weaponry – From modern assault rifles and brutal improvised weapons to historical guns and off the wall “Mad Scientist” weapons, KILLING FLOOR 2 has a unique blend of slaughter tools that will satisfy any gamer. • Expanded Perk System – Players can select from ten different perks, each with its own skills, powers, and weapons, in addition to choosing from among a variety of playable characters with different appearances and personalities. All perks progress with meaningful talent choices that amplify different play styles, giving players a progression path that is expansive and full of rewarding milestones. • Mixer Integration – Interact with viewers in when streaming through Mixer. Viewers aren’t just passive observers, but can affect gameplay, both aiding the streamer and making their game more difficult.

Related:
Live Out Fantastic JRPG Adventures During the Kemco Publisher Sale on the Microsoft Store
Free Trial Available Now for Life is Strange 2 on Xbox One
Thank You for Playing Ori and the Will of the Wisps