We’re excited to bring you our dinosaur co-op shooter to Xbox Game Preview and Xbox Game Pass! During our time in Preview, we’re going to be listening to what you, the community, expect and desire out of a game like ours. Please add your voice to our Discord group; I read every piece of feedback entered in our feedback channels.

Since we’ve been live on PC for a short period, we’ve already identified a few improvements and added these to the roadmap towards 1.0. Cross-play functionality is a significant step, and we’re looking at releasing that in September. This means you will be able to play with your PC friends and vice versa. Additionally, we include a tutorial mission to onboard new players at launch! Also on the agenda are new characters, new weapons, new equipment, and more dinosaur mutations to battle with, as well as the much-requested Horde Mode.

As a team, we’re going to start looking in-depth at reward and motivation systems over the coming months. Are we giving out cool and useful stuff? Do you feel adequately rewarded for your efforts? Do you feel a sense of progression and motivated to try new things out? Killing those evil mutated dinosaurs is fun, but we want to make sure it’s meaningful as well.

Twice a week – Mondays and Thursdays at 1 p.m. CEST (4:00 a.m. PT)-  the map will update based on the amount of research the entire community has gathered, assigning threat levels (increasing stages of difficulty) to each region. The dinos do push back, so if everyone focused their attention on one area of the map to drop the threat level, the dinos will find a more neglected region and increase their attention there, which subsequently increases the region’s threat level. Neglect a Threat Level 3 region too long, and you’ll encounter an Emergence Event – an extreme region with combat-changing modifiers and boss-level fights.

Looking towards 1.0, as we finish refining our systems and features to all our satisfaction (yours and ours), we’re taking our learnings and applying them to a new biome with new missions and species. I can’t reveal much more since it’s still far in the future, but rest assured, we’re working on adding new maps.

We’ll be launching into Xbox Game Preview at the start of Preseason 4. However, we will be making the pre-season 2 contracts and rewards available further into Preseason 4 for our players on Xbox One and Xbox Series X|S so that you don’t miss out on the exclusive content. We will make Preseason 3 content available during a future season for a limited time. We’ll leave none of our newly joined Extinction Elites behind.

I can’t wait to see you in our community! 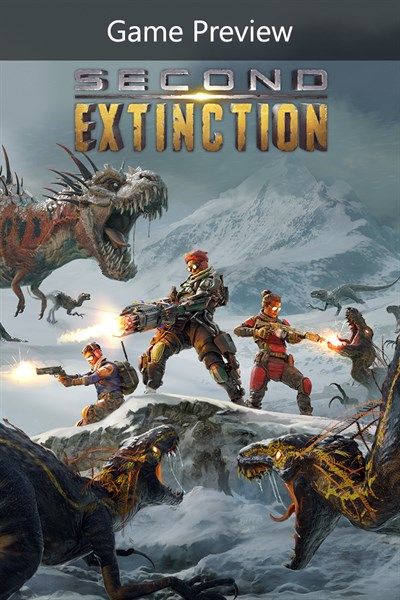 ☆☆☆☆☆ 256
★★★★★
$24.99
Get it now
Xbox One X Enhanced
PC Game Pass
Xbox Game Pass
Free Trial
This game is a work in progress. It may or may not change over time or release as a final product. Purchase only if you are comfortable with the current state of the unfinished game. A NEW BREED OF BIG MAP MULTIPLAYER SHOOTER The goal is simple: Reclaim earth. In Second Extinction you take on hordes of mutated dinosaurs with up to two friends. Solo players beware: Second Extinction is designed with squads in mind. Only the strong will survive. GAME PREVIEW IS JUST THE BEGINNING The goal of Game Preview is also simple: Work with our community to make the best game possible. We want to hear your feedback loud and clear, and we intend for our community to be a vital part of the development process. Even so, there’s plenty to get your teeth (and claws) into from day one: 4 heroes, 10 weapons (with 5 upgrade tiers each) and 6 missions – plus some special side quests – across multiple regions of our big map. JOIN THE WAR EFFORT, SHAPE THE FUTURE Our mantra is that players win battles, communities win wars. Nowhere is this more true than our War Effort feature. Each region of our big map has a unique threat level. This threat level can be lowered if enough of our players are successful in their missions and activities. But the dinosaurs aren’t resting either, and they’ll focus their efforts where you aren’t. Each week the community will see the fruits of their labors or feel the consequence of their incompetence. Let the threat level get out of control and you can expect an especially tough Emergence Event to be waiting for you. By playing Second Extinction you’re not just picking up another co-op shooter. You’re joining us on a journey as we shape the experience. Every piece of feedback and every mission you play matters. So what are you waiting for? The fight to reclaim earth starts here. Full details on the latest status of the game, how you can give feedback and report issues can be found at https://www.secondextinctiongame.com/