After Rugby 18 and Rugby 20, the sport takes its next step forward in Rugby 22. With refined artificial intelligence, a new difficulty mode, cleaner onboarding with new tutorials, more realistic player faces thanks to photogrammetry, and new official teams, EKO Software has gathered all the ingredients needed for a next-generation rugby experience.

Rugby 22 is a simulation, meaning all the aspects of the sport are in there. Rucks, scrums, line-out, drops…every phase and each rule of the sport has been implemented in-game. To add to the immersion, more than 50 official teams are faithfully represented, with both their official home and away jerseys, and all the players on their rosters in the current season.

Top 14, Pro D2, and the United Rugby Championship, fans from all over the world will be able to play with some of the best rugby players on the planet. In addition to this, top national teams are also featured, including the New Zealand All Blacks and the Australian Wallabies for the first time! Combine this with France, Ireland, Wales, Scotland, Italy, Japan, Fiji, and Georgia to get the full picture of the intense international matches you’ll be able to play with your friends.

Rugby may be a contact sport, but the key to victory is often to take a tactical advantage over your opponent. Create space, use your players to their full potential, and you should find a solution to move the ball down the field!

In Rugby 22, we’ve expanded the tactical options that are available, letting you change your pass chain from traditional tactics to many pod possibilities, adjust the position of your winger, chose the right amount of defensive pressure, and much more. You can also use the set play system to define some specific moves, for example doing a succession of crossing passes to gain some crucial ground in those tense final moments.

Master the game and dominate the match in Rugby 22, available now on Xbox Series X|S and Xbox One. 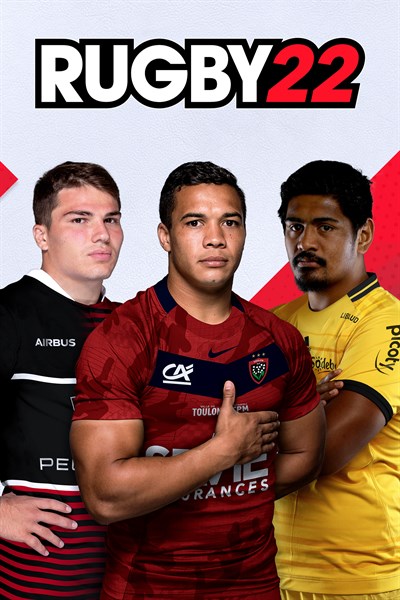 ☆☆☆☆☆
★★★★★
$49.99
Get it now
This product entitles you to download both the digital Xbox One version and the digital Xbox Series X|S version of this game. Limited offer until April 28, 2022. Crouch, bind, set! Discover the true rugby experience.
Play with best clubs and top nations, enjoy dynamic gameplay that stays faithful to the sport, and experience the intensity of big matches. The ALL BLACKS are coming to Rugby 22!
Take control of the biggest clubs and top rugby nations, and enter the most prestigious competitions in single-player and multiplayer modes, local and online.
Rugby 22 offers total rugby, combining tactics and intensity through gameplay that stays true to the sport. TAKE YOUR TEAM TO THE TOP
Lead your players to victory in tournaments, official leagues and a Career Mode in which you can create and manage your own team. OVER 50 OFFICIAL TEAMS
Play in the United Rugby Championship, the Top 14, the Pro D2, and a wide range of national teams, including New Zealand, France, Ireland, Wales and Australia. A GAME MADE FOR FANS
Rugby 22 offers a true rugby experience with a deep tactical system and authenticity that recreates the intensity of the sport's big matches.

Related:
Check Out the Biggest Game Reveals From Nacon Connect