Invoke the Might of the Pyre in the latest update to Paladins, the free-to-play fantasy team-based shooter where you wield guns and magic as a legendary Champion of the Realm.

Since protecting the Realm against the power of Yagorath, Azaan has felt the walls of reality starting to break down, with something even worse ready to emerge from the other side. In preparation for this threat, Azaan summoned the Dawnforge – a base of operations and munitions factory harnessing the wrathful power of the sun to forge an army of willing Pyre soldiers. Under Azaan’s watchful command, the Dawnforge stands poised to stop any invasive threat or even destroy the Realm to stop it from falling into the wrong hands…

The latest update heralds the entry of a brand-new map to the Paladins world: Dawnforge. A formidable fortress for the Pyre, the Dawnforge stands tall as a refuge for its forces and a pillar of destruction for the Realm. Amongst its dazzling marble walls and refined passageways, the Dawnforge map brings a new level of interactivity to players with environmental elements that change the game in a whole new way.

This map has plenty of environmental hazards for players to exploit (or watch out for!), as Dawnforge level designer Shakti Das explains: “Map interactivity was something sorely missing from Paladins and with our timeline we thought this was a great opportunity to experiment. After some testing on an initial blockout – where the forge was just two floors with a giant hole in the middle – environment art discussed adding something that could move between both floors. That’s where I prototyped the hammer and tested it across various movement directions and speeds. The Orb, on the other hand, was introduced in the map’s initial concept art, and I thought of it being a giant Capture Point hazard due to its overwhelming presence.”

Alongside the Dawnforge Map, the new Chaos Rising Event Pass releases with this update, which invites you to embrace the pandemonium as you play through 24 levels of chaos. Earn over 20 rewards, including the Eternal Emissary Tyra and The Harlequin Raum skins, as well as an alternate version of each. Plenty of sprays, avatars, and other riotous cosmetics are also included!

This update also includes the new Lovestruck Kasumi Skin, Skull and Bones Caspian Skin, Draconian Huntress Ash skin, new Limited Time Modes, and more! Command the raw power of the Pyre in the new Dawnforge Map or lose yourself in the pandemonium with the Chaos Rising Event Pass in the Dawnforge update, available now in Paladins across Xbox One and Xbox Series X|S. 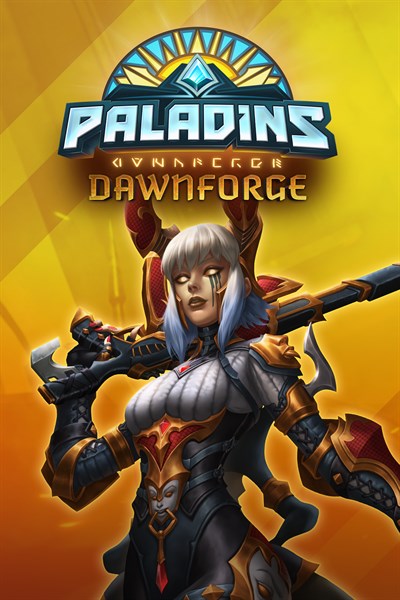 ☆☆☆☆☆747
★★★★★
Xbox One X Enhanced
Join 50+ million players in Paladins, the free-to-play fantasy team-based shooter sensation. Wield guns and magic as a legendary Champion of the Realm, customizing your core set of abilities to play exactly how you want to play. © 2015 – 2022 Hi-Rez Studios, Inc. „Paladins“, „Champions of the Realm“, „Evil Mojo Games“, and „Hi-Rez Studios“ are trademarks or registered trademarks of Hi-Rez Studios, Inc. in the U.S. and/or other countries. All trademarks and copyright material are property of their respective owners. All rights reserved.