At Xbox, we put gamers at the center of our vision – enabling them to play the games they want, with the people they want, and on the devices they want. As part of our efforts and commitment to improve the gaming experience on Windows 10, we want to bring PC players highly requested features based on their feedback. The first step in that is understanding how gamers engage on Windows and making the features and experiences they want easier to access, including social, music, performance and more. Today, we are excited to release a host of new features for PC gamers to the new Xbox Game Bar on machines running the Windows 10 May 2019 Update.

Xbox Game Bar is the customizable gaming overlay built into Windows 10. Xbox Game Bar works with nearly all PC games, giving you instant access to widgets for screen capture and sharing, controlling your music, finding new teammates with Looking for Group (LFG), and chatting with Xbox friends across Xbox console, mobile, and PC—all without leaving your game. You can access these new features by pressing the Windows key and the “G” key at the same time – “Win+G” – to bring up the Xbox Game Bar when playing nearly all PC games or choose your own custom keyboard shortcut.

Here’s a detailed rundown of all the features in Xbox Game Bar: 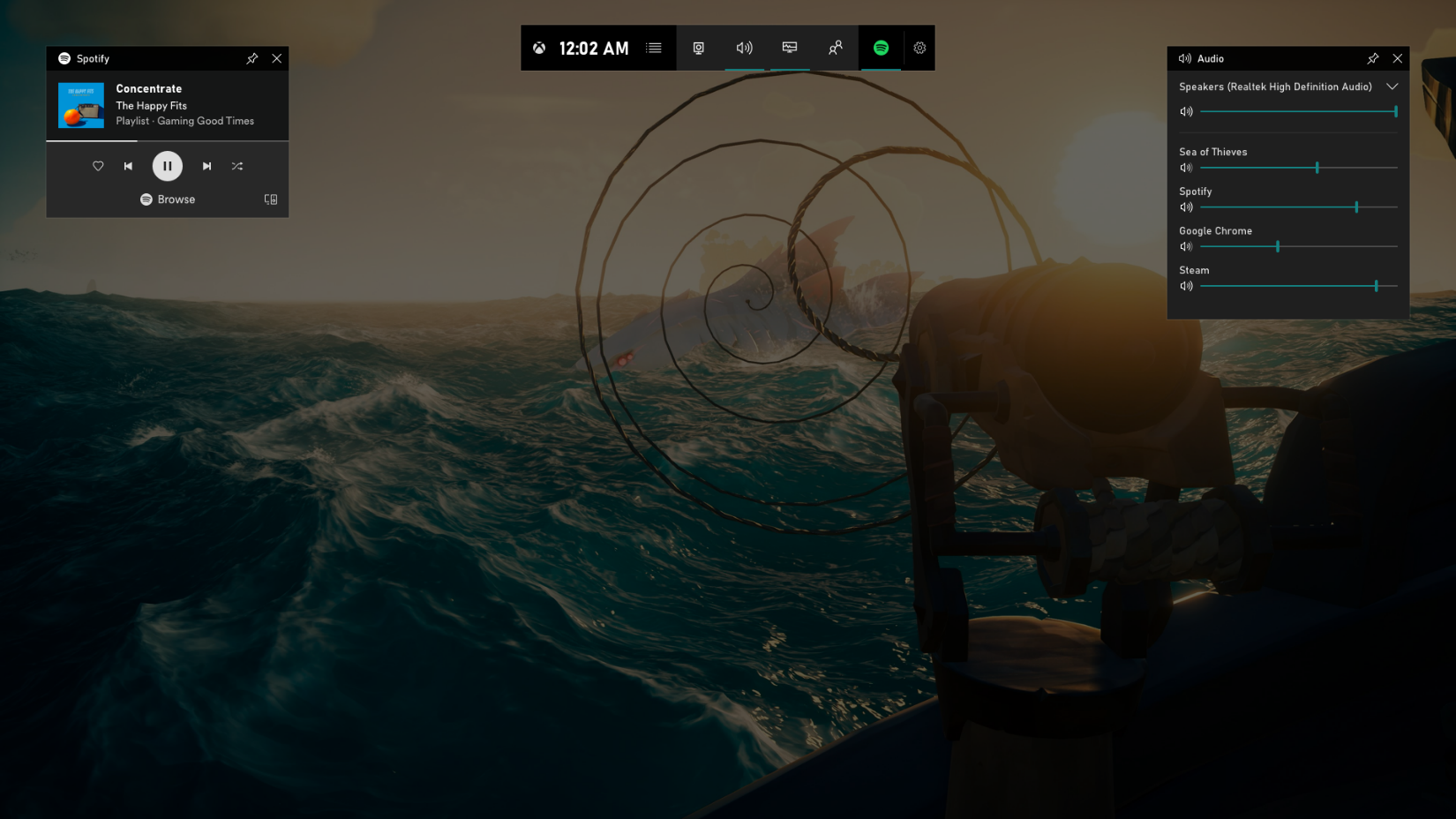 Spotify
Like many of you, we believe music is a very important part of the gaming experience. Now you can easily control music and podcasts on Spotify from the Spotify widget in the Xbox Game Bar, including favoriting, shuffling and selecting playlists recommended for you by Spotify. You’ll need the Spotify app for Windows installed to take advantage of this new feature, so be sure to get it from the Microsoft Store or Spotify.com.

You can get started in three simple steps:

Want to tweak the volume of that song you just started listening to? Pull up the audio widget in Xbox Game Bar to change volume settings across apps quickly and easily without having to alt-tab out of your game. 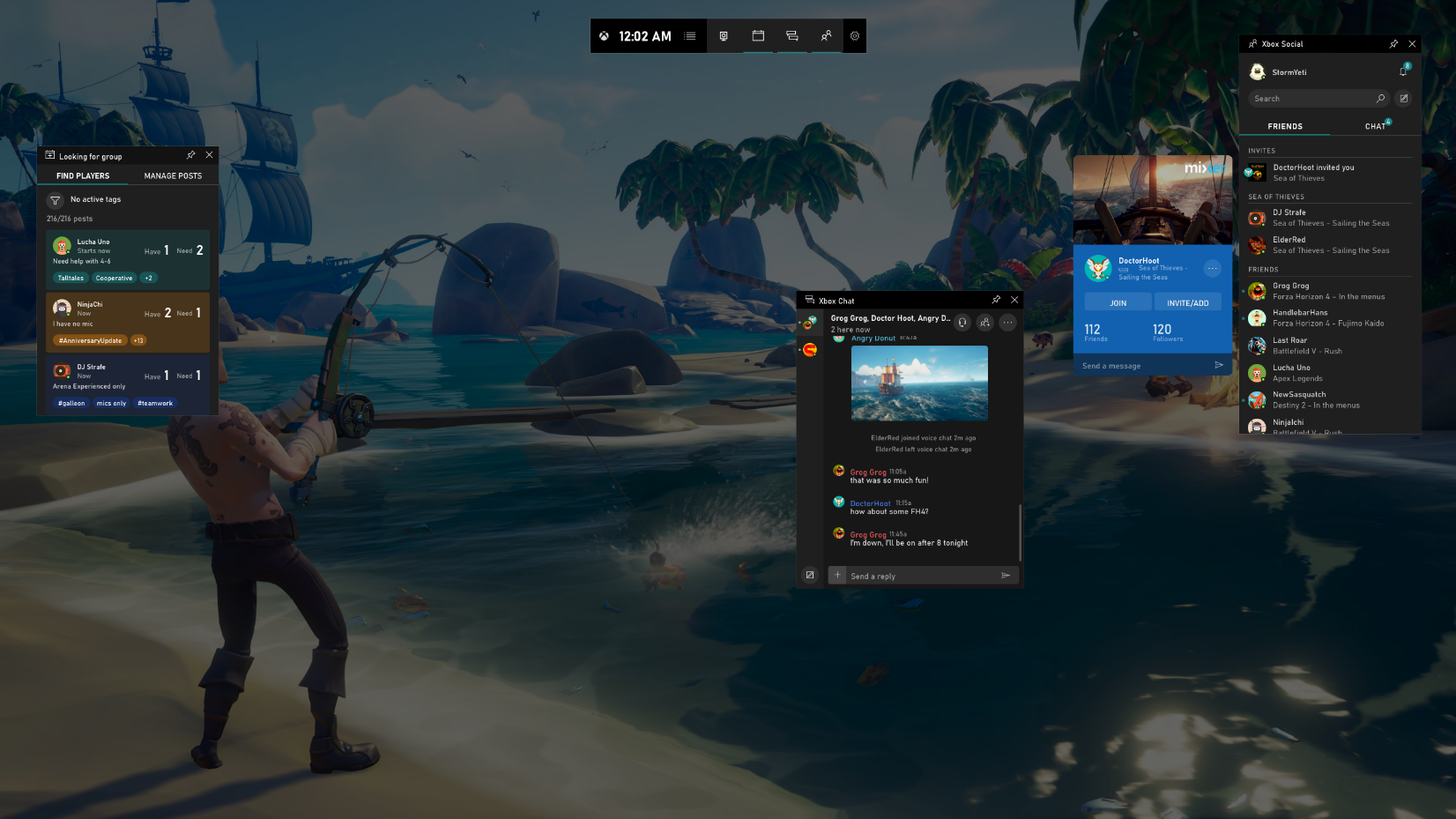 Friends, Chat, Mixer, and Looking for Group (LFG)
The social features in Xbox Game Bar allow you to have conversations with friends who play on PC, Xbox One, and mobile, as well as watch their Mixer streams and send them your creations instantly. Players can use the Looking for Group (LFG) feature on Xbox Game Bar to find new teammates or a raid party with a common play style, all without using a third-party site. Gamers can chat with their friends, using voice or text, in Xbox Game Bar across Xbox One, mobile apps, and PC. Conversations are synced on all Xbox apps, so keep chatting after the game to share memes and coordinate your next session.

Press Win+G at any time to bring up Xbox Game Bar, send a quick message, and get back into the action without taking your eyes off the game. 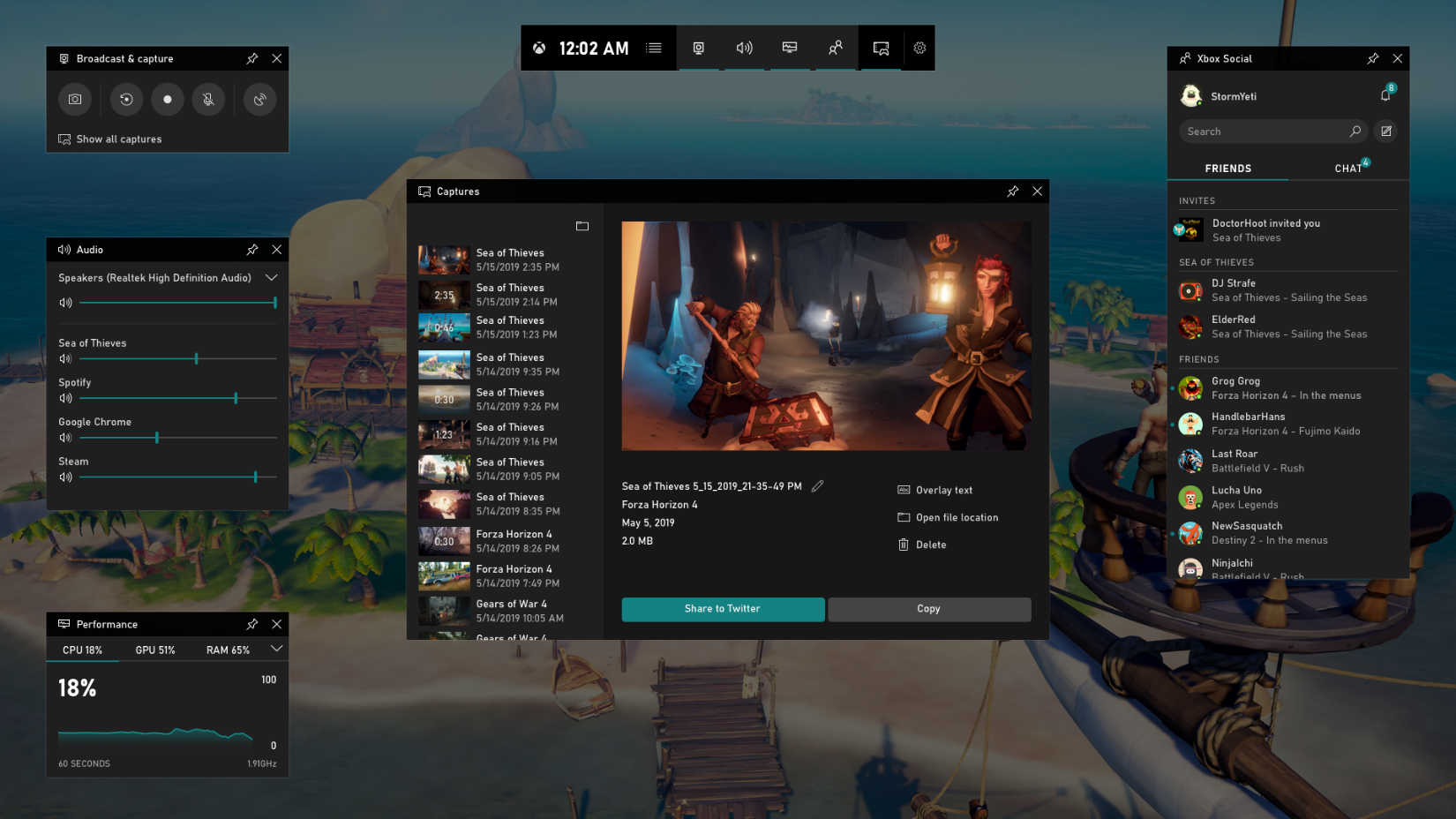 Broadcast & Capture
Back in December, we promised to make it simple to capture your epic gaming moments Currently, you can easily capture and view your gameplay screenshots, then share directly to Twitter without leaving your game.

With today’s update, you can take this a step further by turning your captured screenshots into memes. During your game, hit Win+G to call up Xbox Game Bar, open the Broadcast & Capture widget in the widgets menu, and take a screenshot. Use the Captures widget to add overlay text to your screenshot and make a meme, which you can share with your friends via a message or with the world via Twitter.

Customizable UI
We recognize that customization is central to a rich gaming experience on PC. You can customize Xbox Game Bar to make the overlay your own. You can choose which widgets to show/hide, where you want them located, and pin specific widgets to be always visible. Build your own favorite Xbox Game Bar layout based on the way you prefer to play to enhance your gaming experience.

Here at Xbox, we are a passionate team of gamers who are inspired to continue improving the gaming experience on Windows 10. We’re in the early stages of our journey and the updated Xbox Game Bar experience is just the beginning. As always, your feedback is important to us and our partners as we continue to evolve Xbox Game Bar. So please share your ideas at the Xbox Idea Hub.

And last, but not the least, a huge thank you to all our Insiders for helping us improve the Windows 10 gaming experience!

P.S.: There are a small set of games that Xbox Game Bar may not work over (e.g. games built using the Vulkan API). For these games, you may need to run the game in windowed mode in order for Xbox Game Bar to display.