The Interactive Storytelling Radio uses the same idea and asks the listener to decide
what happens next. The response prompts the built-in Raspberry Pi to jump to the
appropriate bit of the script and narration to continue. “The aim of the Interactive Storytelling Radio was to recreate the experience of
choose your own adventure books, but with voice controls,” explain makers Dane
and Nicole, aka 8 Bits and a Byte. “The radio reads the story to you and when you
need to make a decision, you simply say it out loud and the story continues.
Raspberry Pi is the control centre of the project, passing the data back and forth to
all the separate components, making everything work together.” An extra thrill is that the radio housing the clever storytelling setup is a Telefunken
Bajazzo TS, a West German model dating back to the 1960s and the Cold War era –
“hence the story’s spy theme!” say the makers. They found the vintage radio for sale
in a thrift shop where they live in Brussels, adding to the intrigue.

8 Bits and a Byte is the maker name for husband and wife Dan and Nicole. Having
learnt to code while they were studying, they soon encountered Raspberry Pi and
quickly incorporated it into many of their creations. Even though making as a spare
time endeavour, they’ve posted 47 projects in the space of two years! “A Raspberry
Pi is a great starting point for any project,” they say, modestly downplaying their
quirky ideas as “questionable creations”. 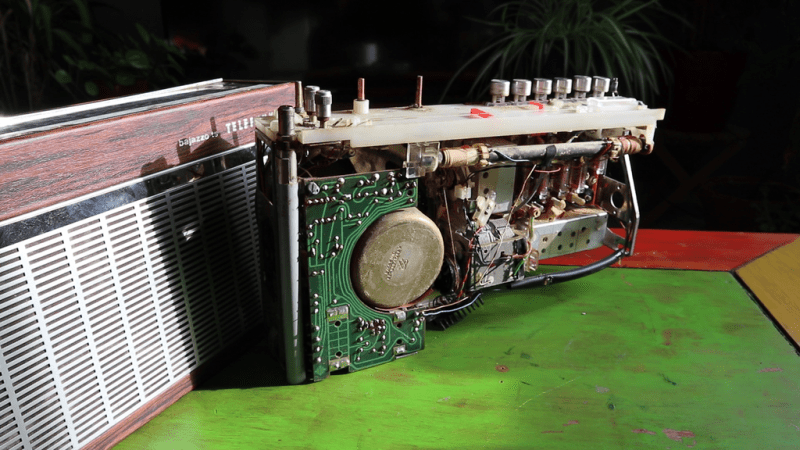 The aim of this project was to make “a voice-controllable, interactive, storytelling
device”. As well as the radio’s case they were able to salvage the original speaker
and on/off button and to keep the part holding up all the buttons. They still needed a
microphone, but most of the rest of the setup was accounted for with a Raspberry Pi
3B+ and Google AIY Voice Kit. Helpfully, both these were items the duo had already
from previous projects.

Assembly-wise, they followed Google’s setup instructions, substituting the kit’s speaker and button for those from their vintage radio. Testing involved trying out some of the examples listed on the AIY GitHub page.

They now needed to write the storyline – a spy story seemed to be obvious given the
host radio’s Cold War origins – and a decision tree to plot the flow. Seeing it
recommended in the AIY Voice Kit guide, they used Google Dialog Flow chatbot
software. Raspberry Pi runs a Python script which communicates with the AIY HAT,
speaker, microphone, Dialog Flow, and Google Cloud. 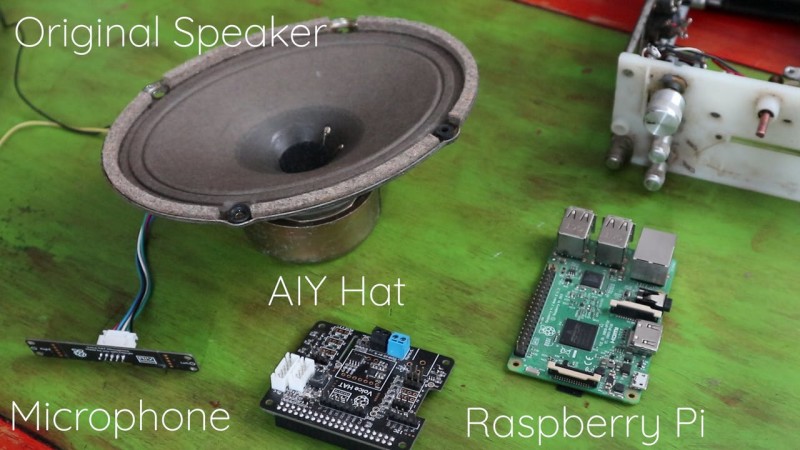 Unfortunately, Dialog Flow “is not actually made to follow a decision tree!” As a
result, one of the ‘features’ of the Interactive Storytelling Radio is the ability to jump
between storylines. “For example, if you’ve chosen the lock pick as the answer to the
first question, but later in the storyline yell “drink”, it will bring you back to the first
decision point”, explain 8 Bits and a Byte cheerfully. Perhaps because of its quirks, the Interactive Storytelling Radio has caught the
imagination of makers online, some of who are building their own to use in teaching
and to help with special needs. Magnificent stuff!