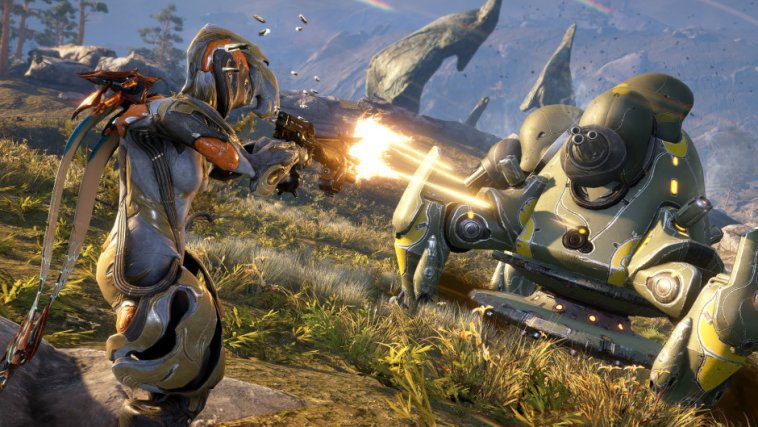 One of the biggest benefits of all that power in the hardware is giving developers the ability to make games that are Xbox Series X|S Optimized. This means that they’ve taken full advantage of the unique capabilities of Xbox Series X|S, both for new titles built natively using the Xbox Series X|S development environment as well as previously released titles that have been rebuilt specifically for the console. In our Inside Xbox Series X Optimized series, these creators will share the behind-the-scenes accounts of how they’re optimizing their titles for Xbox Series X|S and what that means for the future of gaming. Today, we’ll be chatting with Digital Extremes Senior Producer Lesley Milner about making Warframe Optimized for Xbox Series X|S.

Q: “What excites you most about developing and bringing Warframe to life on next-generation hardware?”
A: I think first and foremost is the ability to bring a better gameplay experience to Warframe players. The power of the next-gen hardware means Warframe players can experience up to 4x faster loading times, 4K resolution and 60FPS – things that weren’t easily attainable previously without some type of compromise in other areas.

Q: In addition to benefiting from the power and performance of Xbox Series X|S for quicker load times etc. what Xbox Series X|S features were you most excited to explore leveraging in the development of Warframe?
A: We’re always looking for ways to give Warframe players the best gaming experience, and there are several awesome features we’re looking into for future development. One aspect we were excited to leverage was the ability to provide a cross-play experience across Xbox One and Xbox Series X|S. In the past, moving to new hardware sometimes meant abandoning the friends you had made along the way (temporarily) until they had also moved over to the upgraded console. It has been exciting developing Warframe in a way that players don’t need to make those sacrifices, and everyone can enjoy playing together no matter which Xbox you own.

Q: How will these enhancements impact a player’s experience with Warframe?
A: Warframe is an eight-year-old game (almost seven of those on Xbox One). Being able to bring fresh, new content to our amazing community has always been a top priority. Warframe players can still count on Digital Extremes to deliver quality content with frequent updates, now with improved visuals, audio, performance, and more!

Q: Why did your development team choose to focus on enhanced frame rate and increased resolution as enhancement areas for Warframe?
A: It was important to us that when our players stepped inside the game that it immediately felt upgraded from previous generations. Our goal was – and still is – to bring an experience that’s as immersive and impactful as possible to our players, to deliver the best experience through the Xbox Series X|S.

Q: How do you expect fans of Warframe will respond to playing it on Xbox Series X|S with these enhancements?
A: We hope they love it! When I first started playing Warframe’s most recent update, Call of the Tempestarii, on Xbox Series X I was pretty blown away – from the quick resume into gameplay and fast load times into open worlds, to the awesome graphics and frame rate… it was like experiencing a whole new Warframe! We hope this brings the best gameplay experience possible to our players. And, this is just the tip of the iceberg… there’s so many possibilities to come for Warframe on Xbox Series X|S.

Q: What is it like developing on Xbox Series X|S?
A: Truthfully, it’s always a little scary developing for next-gen! But it’s a fun adventure getting our hands on powerful, new hardware. As I mentioned before, I feel we’ve only just begun. We at Digital Extremes are always looking at ways to improve Warframe, and now Xbox Series X|S presents us with much more opportunity to do so. I’m excited to see what the future holds!

Q: Which enhancement were you most excited about to explore leveraging for Warframe on Xbox Series X|S?
A: Not to sound like a broken record but having Warframe run up to 60FPS in 4K with much faster load times has been pretty exciting to see unfold. I think I’m most excited about what’s still to come and how we can continue to unleash the power of Xbox Series X|S and bring an incredible experience to Warframe players.

Q: What does Smart Delivery mean for your game and how you’re bringing Warframe to fans?
A: The Smart Delivery feature has been great in terms of removing any confusion of which version a player should be choosing. Regardless of system – Xbox Series X|S, Xbox One, or Xbox One X – players will always be provided the best version of Warframe possible. Smart Delivery is one of the many quality of life improvements that really makes a difference for the player’s experience, even before they get in game.

Q: What does Xbox Series X|S development enable in current or future projects that you could not have achieved with the previous generation of consoles?”
A: We’re always looking for ways to get the most out of the hardware and give Warframe players the best gaming experience. Although we’re not able to share in detail today, we have lots of great plans for the future of Warframe and look forward to providing more details in days, weeks, and months to come!

Lastly, but most importantly, a huge thank you to our incredible community who has been with us on Xbox since 2014! Thank you to all the Warframe fans who continue playing Warframe on Xbox, and a resounding “Welcome!” to those who have just joined us. We look forward to continuing to bring you great content and sharing what the future has in store for Warframe on this powerful next-gen hardware.

☆☆☆☆☆ 1547
★★★★★
Get it now
Warring factions have brought the Origin System to the brink of destruction. Join the Tenno and defend an ever-expanding universe. Wield your Warframe's tactical abilities, craft a loadout of devastating weaponry and define your playstyle to become an unstoppable force in this genre-defining looter-shooter. Your Warframe is waiting, Tenno.