Many of gaming’s most compelling stories come from those who’ve helped to create our favorite Xbox One games. In our Inside Xbox One X Enhanced series, these creators will share the behind-the-scenes accounts of the work involved in enhancing these epic games for Xbox One X, how they’ve helped chart the course of the world’s most powerful console, and what that means for the future of gaming. Today, we’ll be chatting about Gears 5 with a crew from The Coalition, including Technical Art Director Colin Penty, PC Technical Lead Cam McRae, and Technical Director Mike Rayner.

What specifically is your development team doing to enhance Gears 5 for Xbox One X?

When we brought Gears of War 4 to Xbox One X, we had a choice between Performance Mode (1080p and 60 fps) and Enhanced Visuals (4K and 30 fps). With Gears 5 for Xbox One X, we have taken an uncompromising approach by optimizing the game so that all modes run at 4K and 60 fps. The Xbox One X multiplayer modes also enables higher quality SSR (Screen Space Reflections) and higher quality SSAO (Screen Space Ambient Occlusion) over the baseline Xbox One S. We pushed visual quality even higher for cinematics on Xbox One X, dialing numerous visual features up. Our favorites include SSR enabled with SSR TAA (Temporal Anti-Aliasing), higher quality SSAO, higher quality bloom lens flares, refraction, and DOF (Depth of Field). We also run higher resolution detail maps across all game modes on Xbox One X thanks to the additional memory at our disposal.

Generally, for multiplayer and cinematics these are aesthetic enhancements that make the game much more pleasing to the eye. For Campaign to run at 60 fps truly transforms the gameplay experience to the benefit of the player.  It makes the game more responsive and much easier to hit that head shot – or to jump into cover at the right time. 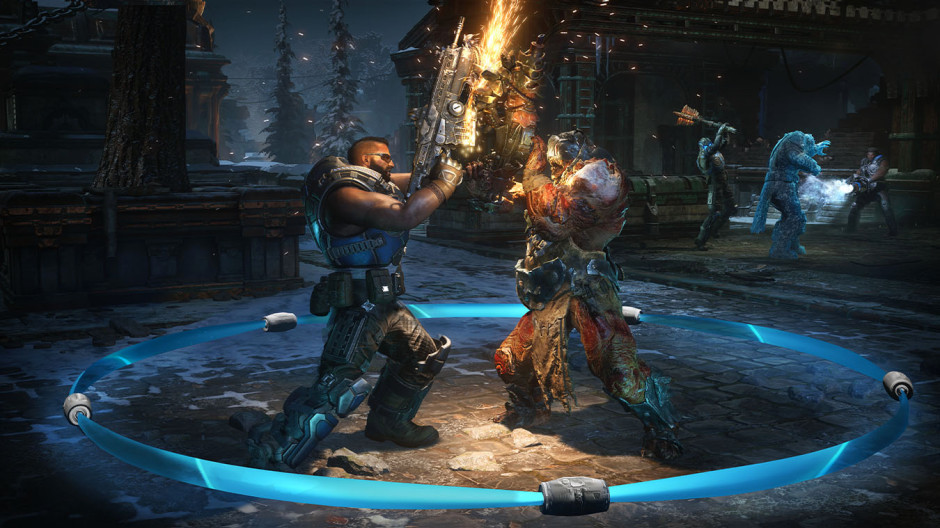 How do you expect fans of Gears 5 will respond to playing it on Xbox One X with these enhancements?

We think we have made the “killer app” for Xbox One X. This game really utilizes the full power of the system with no compromises. Playing at 60 fps with visuals that are typically only possible on the highest end PC rigs I think will surprise people.  The original Gears of War on Xbox 360 showed players why games were better on HD TVs. We think Gears 5 on Xbox One X will do the same thing for immersive gaming with 4K HDR TVs and Spatial Audio (especially 7.1.4 Surround Sound w/ Dolby Atmos support).

Extremely easy. The build of the Xbox One X game is one and the same essentially with the Xbox One S under the hood. Out of the box the game ran so much faster on the Xbox One X. We were able to very quickly use that additional power to deliver higher fps, enable additional graphics features, and increase resolutions. 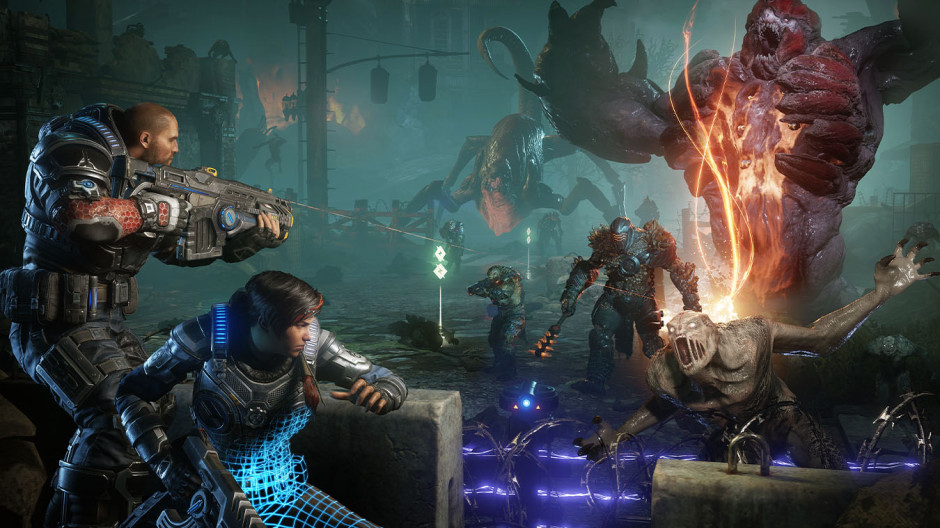 What enhancement were you most excited about leveraging for Gears 5 on Xbox One X?

For the first time in the series’ history, The Coalition has managed to achieve 4K resolution at 60 frames per second across all modes. How were you able to accomplish this feat, and what does this bring to the game?

This was a large collaboration primarily between engineering and technical art. We made the decision early in development, and we stood up a Gears of War 4 level and attempted to run it at 60 fps to prove it was possible. The main learning there was to pull as much off the CPU as possible and run on the GPU, such as particles and VFX. We also had to introduce very strict object count budgets and a lot of mesh merging trickery on the technical art side to keep the Render Thread performance in check on the CPU. We needed to refactor all of our base materials to allow the GPU to run as fast as possible as well as run our Post Process pipeline using Asynchronous Compute.

Finally, engineering did a major refactor to physics and AI to keep our Game Thread at 60 fps.  We adopted Havok instead of PhysX to accelerate our physics work. We invested in multi-core parallel processing to ensure all of the Xbox One’s CPU cores were fully utilized at all times. Playing at 60 fps, you get a smooth and responsive game that feels great. Add to that 4K with high visual quality and you get something quite rare indeed for the current generation and we think a truly immersive and impressive experience. 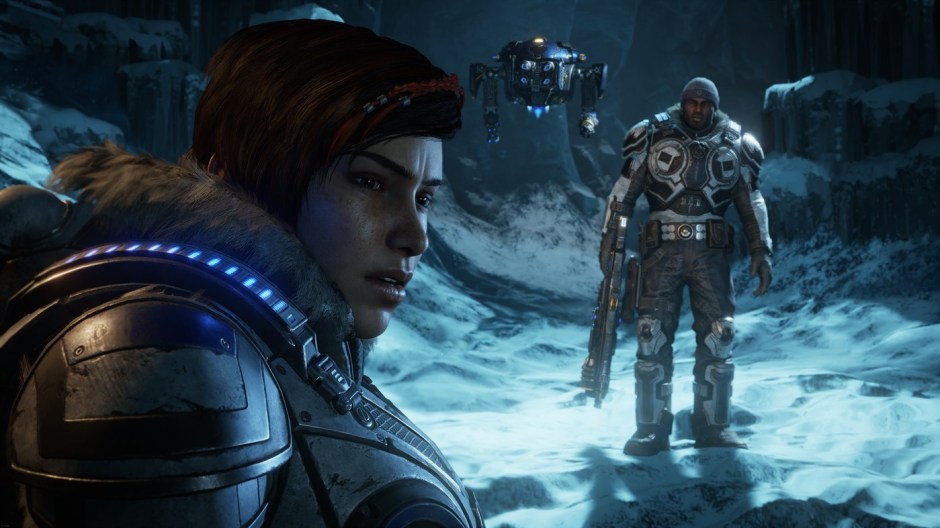 4K was thought about from the beginning of Gears 5. We introduced detail maps across all of our surfaces, including environments and characters, to improve our texel density at 4k. We have improved our HDR support in Gears 5. Using a large data set of pairs of HDR / SDR images from Microsoft’s 1st Party Shipped Games, we used machine learning to train an inverse tone mapper for color space conversion (Rec.2020) and optimal tuning of HDR output in Gears 5. Of course, we also have in-game calibration to let players tune the output for their particular monitor’s abilities. You can tune against reference images as well as the real-time game.

HDR is simply part of our development process now, in terms of content, lighting, and reviewing our work in HDR. It is not an afterthought. We author content with the detail that will show up and take advantage of 4K resolution. HDR and 4K is becoming the standard for AAA games. This extends with Gears 5 now supporting HDR on PC and scaling to even higher Ultra Wide resolutions there.

What sort of technological bells and whistles can PC players expect to see at max settings?

A few areas stand out at max settings. The shadows have extra cascades, max resolution shadow maps and higher quality distance fields that add great details in the distance without sacrificing quality up close. Volumetric fog is very finely detailed and blends seamlessly into the world. Tessellation of sand and snow picks up shadows and has smoother blending. Glossy Screen Space Reflections are supported at the highest level, which picks up indirect reflections from the surface being reflected. 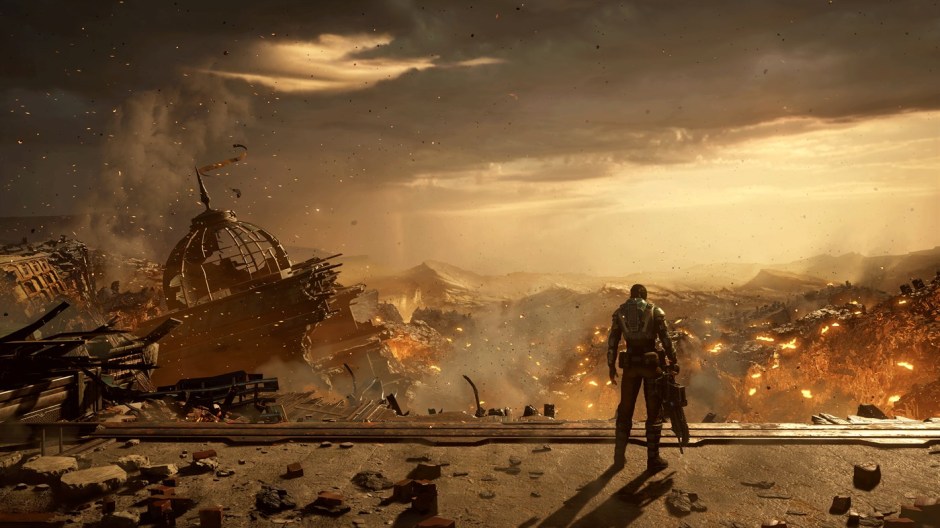 PC gamers love being able to modify a variety of settings to make their games look as great as possible on PC. What are some of the steps the Gears 5 team has taken to give PC gamers that level of granularity when playing on PC?

We have over 35 settings that users can adjust. We believe in helping users understand what they are changing so each setting comes with a detailed description of what the setting does as well as the impact it will have on CPU, GPU and VRAM. In addition, settings that are directly visual come with a preview image for each quality level so users know what exactly they are changing.

We also have a variety of controls to manage resolution and frame rate. All of the expected controls are there, including Resolution, VSync, and Field of View. In addition to these, we’ve added ways to manage the maximum frame rate of gameplay and cinematics independently so users can play at an unlimited framerate and then enjoy the cinematics (which are all real time) at a lower framerate but higher detail. We’ve also added a minimum frame rate option that will dynamically keep the game running at a specified frame rate (or greater).

What are some of the PC-specific graphics features you were most excited to implement into the PC version of Gears 5?

One of the most exciting things about the PC is taking the amazing work done on Xbox One X and figuring out how to take it a step further for the ideal spec on PC. Each setting in the game is hand-tuned at each quality level. During this process, we add and remove multiple settings until we have a final set that complements each other and is useful and understandable for the end user. Figuring out the maximum quality settings is exciting, but it’s just as interesting figuring out how to scale the game down to run on low end hardware and make sure everyone who plays the game is getting the best possible experience.

Thanks to Mike, Colin, and Cam for their time today and for all of their hard work on Gears 5. Stay tuned to Xbox Wire for more Inside Xbox One X Enhanced series features as well as the latest Xbox news.

Gears 5 is available now with Xbox Game Pass for Console and PC. It’s also available for purchase on the Microsoft Store. Click here for additional details.

Related:
Gears 5 breaks records as biggest launch for any Xbox Game Studios game this generation
This Week on Xbox: September 13, 2019
Remnant: From the Ashes Survivor’s Guide – 10 Tips for the Post-Apocalypse