All of us here at the Inkulinati Academy are thrilled to announce that our Inkulinati Masters along with their Beasts are coming to Xbox and Windows PCs with Xbox Game Pass and PC Game Pass as a day one release! All of the medieval superstars you would expect to see, such as Hildegard von Bingen, Sir Godrey, Dante, and even the strange Loony, are all featured in Inkulinati. Now, you’re probably thinking “Well, that’s all fine and everything, but what the heck is Inkulinati?” And that, my Liege, is a fantastic question. Let us explain. Inkulinati is a turn-based strategy in which a rabbit’s bum can be deadlier than a dog’s sword. You will fight other Inkulinati Masters on the pages of medieval books using guile, smarts, quills, and wits. Sounds interesting? Great! Let us tell you more.

Shhh… A battle is taking place as we speak…

A single-player campaign for the ages

In Inkulinati you will be able to embark on an ever-changing journey which, hopefully, will culminate in you becoming the greatest Inkulinati Master of all time. I’m sure that on the surface, this sounds rather easy, but do not be fooled my wise Liege. The Inkulinati single-player campaign is filled with many dangers, as well as adventures. Maybe even… dangerous adventures (*gasp*!). You will not only battle other Inkulinati Masters across the land, but you will also encounter Wild Beasts (Beasts who have no master), meet interesting characters such as the Bard who may sing songs about your feats (for a fee of course), a Tavern Lady that will be ready to replenish your thirst, and you might even meet a goose! Every time you embark on a new adventure, it’ll always be different to the one you had previously. No adventure is the same. It’s unique – just like yourself my Sire, if I may be so bold.

Battle One Another in Local Multiplayer

Of course, defeating Inkulinati Masters who are controlled by the dark forces of CPU and AI is fun. Nevertheless, we understand that you might seek to battle one of your friends as well. For that, we have developed the local multiplayer Hot Seat mode. Both you and your friend (or foe) can choose your Inkulinati Master and its Army of Beasts, the Battlefield on which the battle will take place, and decide on the finer details of the battle, such as Magic Ink drop frequency (that’s the substance that brings drawn Beasts to life) and if, or when, the dreaded Apocalypse arrives (a tide-turning event that comes in many forms and shapes. It’s vicious Sire, I swear!).

Nothing like a sneaky attack from behind, am I right, Sire!?

The time for more details about Inkulinati will come. There is more news ahead, so stay tuned. Inkulinati will be available as part of Xbox Game Pass on your Xbox consoles (Xbox One and Xbox Series X|S) and Windows PCs via Xbox Game Preview program. What does that mean exactly? Well, over the next few months we will be working together with you, our community, on updates and changes to the game. We want to hear your feedback, comments, and ideas to make the best game possible! We hope that you will join us on this adventure together this January 31, 2023. Until then, join us in our Discord and keep your quills sharpened! 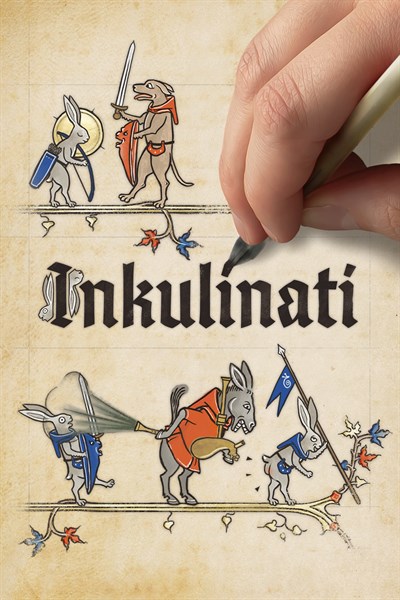 ☆☆☆☆☆ 8
★★★★★
Inkulinati is an ink-based strategy game straight from medieval manuscripts, where a rabbit’s bum can be deadlier than a dog’s sword. Take your turn in Inkulinati duels filled with unexpected tactical depth (and humour!). Embark on an ever-changing journey, build your own bestiary, defeat medieval superstars and collect perks to unleash special powers. Become a master of the Living Ink, grab your quill and build your unique strategy time after time so that you can be named the greatest Inkulinati of all time! INKULINATI IS INSPIRED BY REAL-LIFE MEDIEVAL MARGINALIA
700 years in the making, finally these bizarre art pieces can come alive in a video game and show that medieval people also had their “memes” and that they laughed from the same silly things that we do today. You’ll see sword-wielding rabbits, dogs with spears, trumpets lodged in bottoms, human-eating snails, and more. Much, much more… FIGHT LIKE AN INKULINATI
Inkulinati are a legendary group who battle one another on the pages of medieval manuscripts. They fight by drawing Beasts with the Living Ink. Thanks to this magical substance, those creatures come to life and an epic battle ensues.Move your Beasts across the battlefield, perform actions on or with them, make tactical use of obstacles and collect more Living Ink to draw new Beasts which allows you to gain an advantage over your opponent. MULTIPLE DEADLY (AND BIZARRE) BEASTS TO UNLOCK
Donkeys playing trumpets with their bottoms, bishop cats vanquishing heretics with prayers, heavy but deadly snails that eat units alive, and more. Much, much more. They all have their special skills and are waiting for your command. SPECIAL, BATTLE TIDE-TURNING ACTIONS PERFORMED BY THE INKULINATI
It’s not just your Beasts that can cause havoc and damage. Use your fists to smash your opponent’s units, draw obstacles to create barriers, relocate your units with a move of your finger, or explode your troops to create pure, pure chaos. Just remember – your opponent can do it too. ADAPT YOUR TACTIC TO EVERY BATTLE
Each Inkulinati has its own army, with different Beasts, who in turn, have different abilities, strengths, and unfortunately, weaknesses (or fortunately – depending which side you’re on). But it’s not just the armies that can influence who will win any given duel. Each Battlefield is its own domain, with its own particular dangers that you should watch out for, and opportunities that you can use. You will have to use your wits and adapt your strategy to beat the opposing Inkulinati’s army on each specific Battlefield. A SINGLE-PLAYER CAMPAIGN
Uncover the mystery and secrets of Inkulinati and face such opponents as Death, Dante Alighieri, and more. Go out into the world and start your adventure! Fight the biggest Inkulinati masters in the land, tame the untamed Beasts, build your ultimate army, try to bring back your Master from the clutches of death, and most importantly, finish your grand quest with the biggest party that the middle ages have ever seen! Howza!!! CREATE AND DEVELOP YOUR OWN CHARACTER
As any aspiring Inkulinati Master, you will get to create your own Tiny-Inkulinati. During your journey you will learn the secret techniques of drawing new Beasts and Inkulinati Hand Actions, allowing you to choose the composition of your army. You can be a brave knight that has no fear and will send his loyal troops straight at his opponents. Or perhaps you would like to play with a bit more tact? In that case, you can be a nun who with the power of prayer can confuse her enemies and heal thy own servants. Those styles, and more, are waiting to be discovered and made your own. Express yourself! EVERY BATTLE HAS ITS OWN STORY
To mark every battle in history books for all future generations to see, a procedurally generated text describes the dramatic (or hilarious) events in detail just above the battlefield.