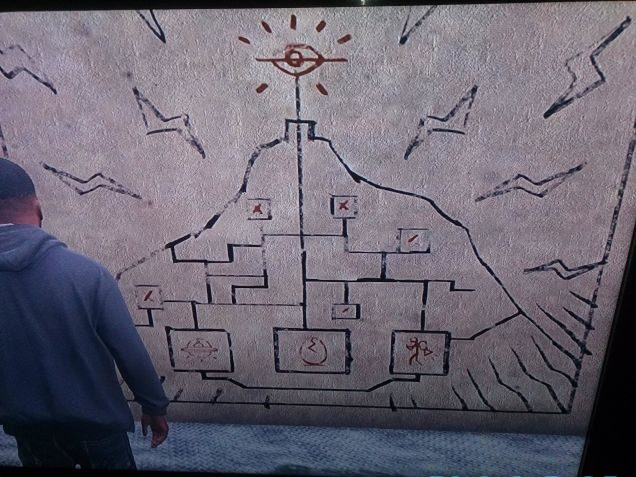 So as GTA V is now out for more than a week we tought of getting some good videos together for you folks to check out some of the Rumors going on right now in Los Santos!

First of let us start with the ‚Monkey Mosaic Graffiti‘ Mission:

Play as a Fish:

Play as any Animal:

Read on for the Jetpack Mistery!! 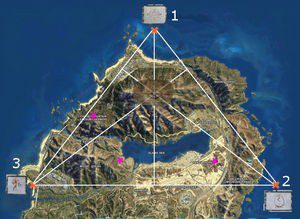 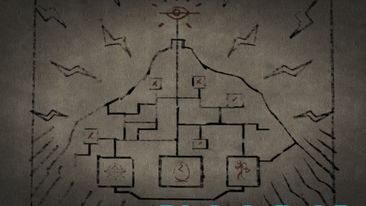 All Graphics Comparision Rumors should be solved with this Video, until the PC Version 😉

BIG SPOILERS READ ON IF YOU COMPLETED THE GAME 100%

I’m going to use this thread as a collection of all the information we’ve found so far regarding the secret of Mt. Chiliad, whatever that secret may be.

Feel free to post any ideas you have about all of this, and remember there are likely to be spoilers here. You’ve been warned!

The Map (where it all started!)

The map appears to be a picture of Mt. Chiliad with a UFO or an eye at the top, with lightning surrounding it. The lightning is how people figured out it has to be storming for the UFO to appear.

On the bottom there is another picture of a UFO, as well as a cracked egg, and what appears to be a stick figure wearing a jetpack.

The Viewing Platform on Mt. Chiliad

There is a little viewing platform on Mt. Chiliad that has a few notable things on and around it.

First, there is an image of a UFO/eye underneath of it, painted in red.

Second, „Come back when your story is complete“ is written on the back, indicating that you need 100% game completion (you musthave 100% completion, not just the story completed)

This is also where you need to stand in order to encounter the first UFO sighting.

The first sighting occurs while standing on the platform with the two telescopes at the top of Mt. Chiliad.

There are three conditions that must be met:

Once the UFO appears, it will stay there as long as you’re on the peak. I’m not sure if it will be there when you come back, you may have to retrigger it.

Things we know about this UFO:

„Solid“ just means the UFO is not a hologram like the one on Mt. Chiliad. You can land on them, shoot them, etc.

The same things are true for all solid UFOs:

This is the same UFO that appears above Mt. Chiliad, but it is solid and can actually be landed on with a helicopter, and can be walked around on.

This UFO is at the very highest altitude, right above the „hippy camp“. The hippy camp is a small little park with art made from concrete and paint, with lots of references to UFOs and aliens.

Nothing interesting happened when I tried all of that.

Special note about the Hippy Camp: The hippy camp is full of references to aliens which may have something to do with interacting with the FIB UFO.

There’s a lot more there but I’ll let others check it out. Remember the hippy camp is directly below where the FIB UFO appears.

My thoughts: I think we need to get the UFO to abduct us some how, and the clues at the hippy camp are how to trigger it.

This was the first solid UFO found.

How it was found:

Strange lights appear on a bunker in Ft. Zancudo, starting at around 2 AM. At 3 AM the lights turn all the way on, and the lights spin until about 4 AM and then cut off. The UFO was found by flying directly above the location of the bunker with the lights.

A video of the lights:
http://www.youtube.com/watch?v=BOInfd521yI&feature=player_embedded

The location of the bunker and the UFO:
http://i.imgur.com/G6Nfcxy.jpg

Locating the UFO: Simply fly at about 3/4s of the maximum altitude around the marked location in the image above to find the UFO. 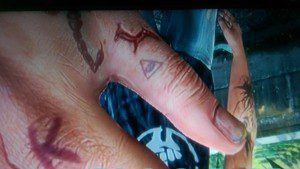